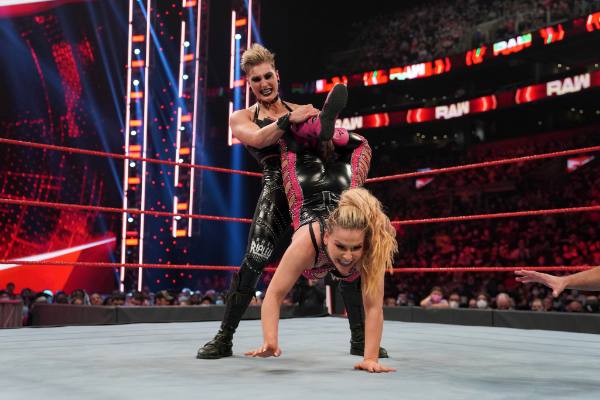 Botches in WWE | As part of a future match with the WWE Women’s Tag Team Championships at stake, challengers Nikki ASH and Rhea Ripley faced reigning champions Tamina and Natalya in singles matches, respectively. We commute what happened in this fight of WWE RAW from September 13.

Botches in the result of a WWE match

The fights took place last night on Monday Night RAW that was broadcast from the Cricket Wireless Arena in the city of Revere, Massachusetts. Both results favored the challengers, thus reaping important triumphs on the way to the fight for the Championships to be held in the pay-per-view Extreme Rules on September 26.

However, there was a strange ending in the fight between Nikki ASH and Tamina, because during the last seconds of the fight Nikki applied a DDT tornado from the corner of the ring and proceeded to cover her opponent who managed to get out of the pin in time by pushing with Leg. However, the referee made the count to three and ended the match with Nikki as the winner, the strange thing is that after this Tamina’s music sounded and there was some confusion among the narrators.

Immediately afterwards there was a commercial pause; when the announcers returned to the air they reviewed the action and recognized Nikki as the winner. It was also announced that the ‘Almost Super-heroine’ was being treated by medical personnel; Fortunately for her, her complications were not serious and she was able to be present at the ring side of Rhea Ripley’s fight against Natalya that took place after her fight against Tamina. Apparently the original plan of WWE was for Tamina to take the victory, this would explain the confusion and the music that played after the fight, however, an improvised ending was carried out due to a possible injury to Nikki.

Has this mistake in WWE wrestling surprised you?

Thank you for sharing this time and enjoying this passion with us., PLANET WRESTLING, your WWE website. Remember that you can follow us on our Social Networks and that on the web every day we bring you closer all WWE news, videos, interviews, with the best coverage and live monitoring as soon it will be expected WWE EXTREME RULES 2021.