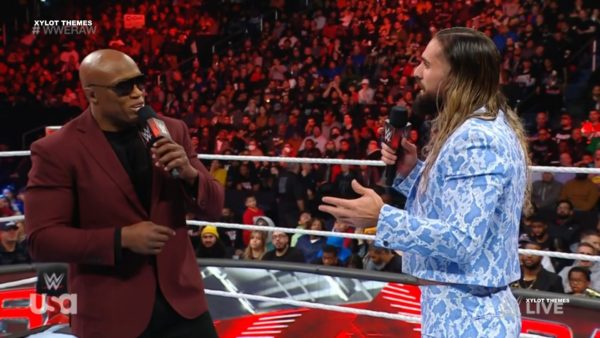 Bobby Lashley confronted Seth Rollins during the recent Monday Night Raw. The Almighty and The Visionary came face to face weeks after their extremely physical showdown that also involved Austin Theory at Survivor Series, and they heated up again for their duel next week, where both will seek to become Theory’s number one challenger for the United States Championship.

During the interaction between Rollins and Lashley, the former told his future rival that he was jealous of Brock Lesnar, which angered “All Mighty”, who ended up attacking him. Both continued the fight inside and outside the ring until several officers arrived, headed by adam pearceto separate them.

Lashley wanted to get his hands on Rollins at all costs, but during the same altercation, when he tried to hit the Visionary with a spear, he accidentally hit WWE producer Petey Williams, leaving him sprawled in the ring. This situation was referred to minutes later by the commentators, and motivated that adam pearce He will leave an ultimatum for Lashley, warning him that if it happens again, he will be suspended.

petey williams was hired by WWE at the beginning of this yearafter a step by Impact Wrestling. Although he has worked as a fighter and is known for his Canadian Destroyer, since 2017 he has worked as a producer in said company. Williams has not fought in WWE, and to find out his last match we have to go back to October 31, 2021, where fought in the WAC Year Three event: WACstreet’s Back! from the Without A Cause promotion, defeating Nick Wayne.

Now that Petey Williams has eaten a Bobby Lashley spear in #WWERawLet’s remember the crazy Canadian Destroyer he did last year at IMPACT Slammiversary. pic.twitter.com/n1BrXfUioS

Bobby Lashley injured a producer during an altercation on Raw