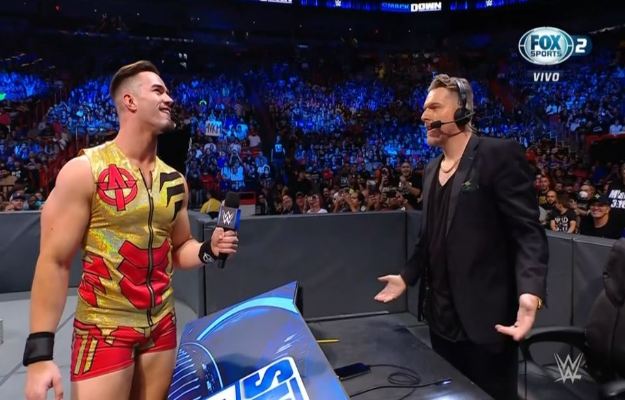 With the great opportunity presented to Pat McAfee to have his moment WrestleMania 38, Tonight in SmackDownhis opponent appeared to make things clear facing his fight.

Pat McAfee has a chance to have his WrestleMania moment

Last week there was a special occasion in which the head of the board of directors McMahon I was a guest on Pat McAfee’s podcast, there were two great news regarding sports entertainment, the first revealed by Mr McMahon himself is that it would be him who will present The Undertaker at the WWE Hall of Fame ceremony, the second had to do with Pat McAfee since he found out thate at WrestleMania 38 will have a official fight.

All the fans are waiting to know who would be McAfee’s opponent on the biggest stage of all, during the action of SmackDown we would get that response, from monday night raw Austin Theory was present and he presented himself in front of the people of the blue mark as Mr McMahon’s favorite and therefore confirmed to McAfee, that at WrestleMania 38 it will be Austin Theory vs. Pat McAfee.

After giving him the news, Austin approached the comment table to clearly tell McAfee that he has no chance against him, after which he threw the microphone at his face as a sign of disrespect, he also walked away and took out his cell phone to take some selfies of the moment.

This left Pat McAfee furious and he complained to the public, to Michael Cole and with Austin Theory especially, defending his person, he affirmed that they do not know what he is capable of and that at WrestleMania he will give the best show the world has ever seen.