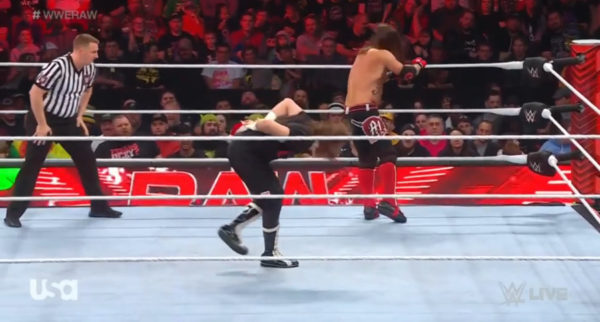 In the recent Monday Night Raw, AJ Styles challenged sami zayn after he and The Uses they will attack him after the victory of The OC on Alpha Academy. Adam Pearce made the official match and it went well, with the former WWE Champion battling without his teammates, despite the presence of Sikoa only, who generated the definitive distraction for the victory of the “honorary Uce”. The curious thing about this situation was that Zayn won with the Blue Thunder Bomb instead of the Helluva Kick.

The Honorary Uce now has the distinction of winning two matches in his WWE career thus far with the Blue Thunder Bomb, which has normally been seen as a non-defining move. The Twitter account of Humble Wrestling brought with it a curious statistic indicating that this is only the second time that the honorary Uce has won with this maneuver, the previous one being in 2016 during an episode of SmackDown. The anecdotal thing about this matter is that the rival who was defeated by said movement was the same as last night: AJ Styles, making him the only Superstar to be defeated by a Blue Thunder Bomb.

This is the second time Sami Zayn has beat with the Blue Thunder Bomb. They had a match in 2016 where he beat him in the same way.

«This is the second time that Sami Zayn has won with the Blue Thunder Bomb. They had a fight in 2016 where he beat him in the same way.”

Despite the defeat, things may not turn out that way for AJ Styles who felt the numerical disadvantage in favor of his rival. Meanwhile, Sami Zayn will prepare to face, together with Roman Reigns, a fight that promises a lot when they meet on December 30 on SmackDown against Kevin Owens and John Cena, who returns to the screens after six months.

AJ Styles is part of a unique statistic in WWE