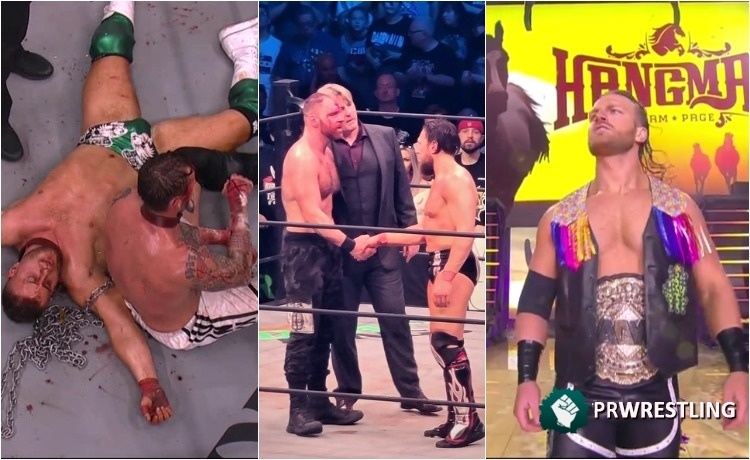 AEW celebrated Revolution on Sunday night on Pay Per View.

Leyla Hirsch defeated Kris Statlander after hitting him with a corner turnbuckle.

Tony Schiavone was in the ring and said that AEW has a special guest tonight. Kenny Omega’s music played, but it was Don Callis who came out. Callis is confident that Adam Cole will be the next AEW World Champion, and he will be a fantastic *transition* champion until Omega returns.

Eddie Kingston defeated Chris Jericho in a tag match when Kingston shot and hit two Urakens and then Stretch Plum for the submission victory.

After the match, Kingston offered Jericho his hand but Jericho left upset.


Face of the Revolution Ladder Match: Wardlow defeated Keith Lee, Christian Cage, Orange Cassidy, Ricky Starks and Powerhouse Hobbs in a good match full of creative moments. In the end Cage went up the ladder, but Wardlow cut him down with a powerbomb. Wardlow jumped onto a ladder bridge and launched Starks in another power bomb on the ladder. Wardlow then went up and unhooked the ring to win.

Tony Schiavone announces the new arrival of AEW: “Swerve Strickland”. Swerve signed the contract and Schiavone welcomed him to AEW. Swerve had a question for everyone: “Whose house?” “Swerve’s house!”

Dog Collar match: CM Punk defeated MJF. Punk bled profusely. In the final moments the chain unhooked from MJF’s collar, so MJF called out to Wardlow as the officer put it on.

Wardlow walked out and MJF demanded the diamond ring, but Wardlow couldn’t find it. Punk used the distraction to hit MJF with the GTS, on some thumbtacks. Wardlow suddenly found the ring in his pocket and passed it to Punk. MJF spit in Punk’s face, but Punk hit him with the ring for the win.

Dr. Britt Baker, WMD (c) (with Rebel & Jamie Hayter) def. Thunder Rosa to retain. This left a lot to be desired. In the end Rebel distracted the officer while Baker tapped. Rosa then threw Rebel to the ground on Spear and knocked Hayter down. As Rosa re-entered the ring, Baker hit a Stomp for the win.


Jon Moxley defeated Bryan Danielson in an intense fight in which Moxley bled. Danielson set the triangle. Moxley battled for a long time and turned the tables on Danielson for a pinfall victory.

After the match, Danielson and Moxley got into a fight. The security came out to separate them in vain and for the moment WILLIAM REGAL, a mentor of these two men, comes out to a mega ovation. Regal gave Moxley and Danielson a hard slap before demanding that they shake hands, which they did. The three of them left together.

An important figure for both of these men, @RealKingRegal is here at #AEWRevolution! pic.twitter.com/mhjAfPn2Hp

Sammy Guevara, Darby Allin and Sting over Andrade El Idolo, Matt Hardy and Isiah Kassidy in a tremendous fight. Sammy launched Kassido in Spanish Flu from stage height onto two tables. At another point Butcher and Blade intervene in the public area, where they set up several tables. Andrade was on them and STING dropped from above them. Darby beats Hardy for the win.

What did we just witness from #TheIcon @Sting ?! 😱 #AEWRevolution is LIVE on PPV! pic.twitter.com/zTeRjBS03I

In the star, Hangman Page retained the championship against Adam Cole. Reddragon intervened several times but the Dark Order came out and ran them off fighting. In the final moments, Page threw Cole into Dead Eye on a table and shortly after hit him with a Buckshot Lariat, which Cole survived. Page drops a knee brace and hits it with his own version of the Last Shot, followed by the Lariat for the win.