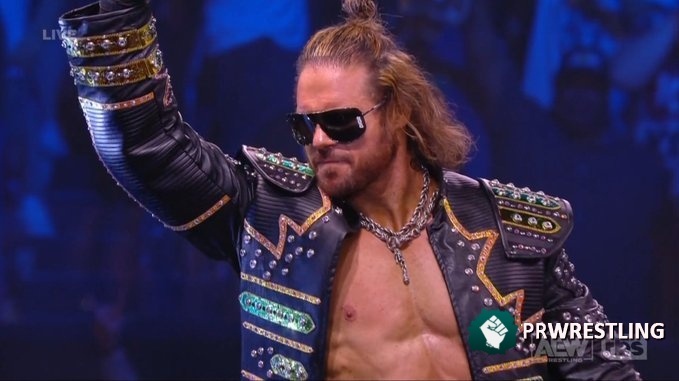 Right after, Sonjay Dutt (with a pipe) and Jay Lethal ran up and attacked Joe. Satnam Singh followed up and held Joe back as Lethal hit him with the pipe. Trent, Chuckie T and Rocky Romero ran out with chairs in hand to stop the assault.
Hangman Page defeated Konosuke Takeshita. CM Punk was at the comment table.

After the match, Page and Punk stared at each other.

After the match, Lee announced that he and Swerve are now a top 5 ranked team. They were interrupted by Ricky Starks and Powerhouse Hobbs of Team Taz. Starks called them jabronies and said it was ridiculous that they thought they deserved a title shot.

Jurassic Express then came out alongside Christian Cage. Christian talked about how Starks thought he was ready for a “real” championship, but Jurassic Express are the best. They challenged both teams to a tag team title match at Double or Nothing. Not only that, Christian offered Jungle Boy vs. Swerve Strickland vs. Ricky Starks for next week.

MJF gives Wardlow ten lashes – After 9 lashes,. MJF backed off for the 10th but opted to give him a cheap shot, then goes on to whip him further and choke him while Spears held Wardlow in handcuffs. MJF hit Wardlow with the Dynamite Diamond Ring, then Spears hit him with the C4.

O’Reilly will face Samoa Joe in the semifinals.

Head-to-head matchup between Chris Jericho and William Regal. Regal taunts him and Jericho had enough, so he challenged them to the third Annual Stampede at the Stadium. Moxley cut him off, saying that they wouldn’t get involved in that sports entertainment stuff. In Double or Nothing, it would be a five-on-five war. Jericho accepted.

Kingston blew Jericho away and demanded that they get in the ring and fight. JAS acted like they were going to do it, but then Jericho said “Forget it” and left.

In the ring, Serena Deeb interrupted Tony Schiavoni and said that she was tired of hearing him talk. Deeb talked about all the things she’s been through in WWE, like getting breast implants and shaving her head, and she demanded an answer from Dustin on why he doesn’t think he can beat Thunder Rosa. Deeb slapped Dustin across the face.
Rosa ran off, but Deeb was able to hit her with the belt and escape.

After the match, the Young Bucks ran up and acted like they were going to kick Jeff, but Cole pinned the Hardys first. They hit the BTE trigger. Sting and Darby Allin then ran to clean house, but reDRagon came out and eliminated Darby with High Low. Sting battled Cole and reDRagon, but was eliminated with superkicks before O’Reilly attacked Sting’s ankle with a knee drop through a chair.

Cole will face the winner of Kyle O’Reilly vs. Samoa Joe in the semifinals.