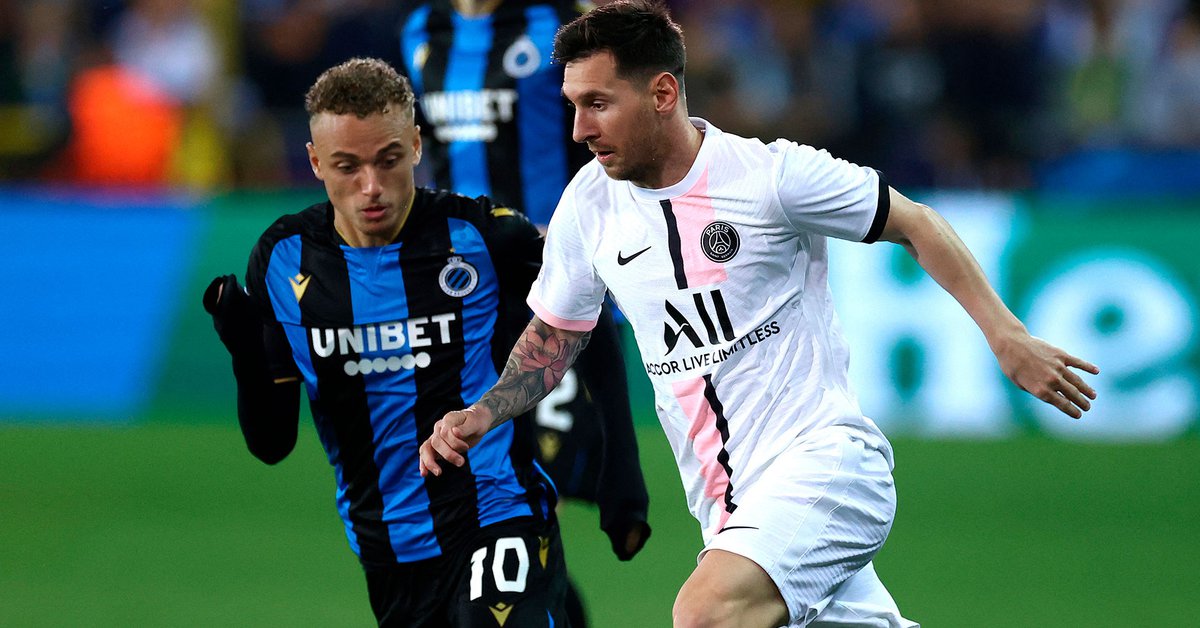 In each season that begins, the great obsession of the Paris Saint Germain (PSG) is to fight for the trophy of the UEFA champions league, an objective that the Qatari management of the club has dragged on for more than a decade and in which hopes are firmer than ever for the arrival of Lionel messi. With the Argentine star on the field, the adventure of this course begins with a visit to the Club Bruges at Jan Breydel Stadion, for the first day of Group A.

They were 15 minutes of analysis, where the local team was planted high up to sustain a high pressure that forces the French team to bet on long balls. Thus, he managed to drive away Lionel Messi, Neymar and Kylian Mbappé of his bow and even had some approaches that forced Keylor Navas to intervene. But it was only 15 minutes.

The one who broke the monotony of the duel was MbappeBecause when tactics and strategy are imposed on the court, only dribbling can change the script. The Frenchman faced on the left, left his mark on the road with a feint and subsequent hook that allowed him to find the hole and launch the hunt into the area in the direction of Ander Herrera. The Spaniard, who entered like an arrow, shook with his left foot and put the 1 to 0.

In the approach of Pochettino It was noted that none of the three points assumed a fixed position. With a fairly orderly disorder, the members of the trident were exchanging roles and that was how it was possible to see Messi at times well attached to the right wing and at other times as false 9.

Despite the advantage on the scoreboard, there was no superiority of PSG on the field of play over Brugge and after 27 minutes the tie came. The Belgian champion was able to put together some very good action on the left when Lang leaned back on that side, collected marks and released an inter-cut pass to Sobol. The side reached the bottom and threw the center back so that Hans vanaken I struck down Keylor Navas and shouted 1 to 1.

After that goal, there was a rebellious attempt by the French team led by Messi who crashed a shot on the crossbar, in his only shot in the first 45 minutes. But beyond that, the balance for him Dream team it was negative.

The PSG he was split, with the attacking trident without compromise when scoring and with a completely overwhelmed midfield. In this way, the centrals were exposed to each attack and Keylor Navas had two fundamental saves to avoid what would have been 2 to 1. While in the offensive facet there was no participation of the sides, protected to avoid future problems in the setback, and there were practically no connections between Neymar and Messi.

It is the first commitment of the Parisian team that directs Mauricio Pochettino corresponding to Group A, where the Belgian champion is presented as one of the most accessible rivals, since they have also been paired with him Manchester City and the RB Leipzig.

After staying eliminated in last year’s semifinals, precisely before the Citizens from Pep Guardiola, the illusions of PSG They have been renewed for a summer market in which they achieved luxury acquisitions: Sergio Ramos, Donnarumma, Hakimi, Wijnaldum and, mainly, Lionel messi.

The Argentine star moved to the French capital after an abrupt departure from the FC Barcelona and you also want to win again The Orejona that resists him since he raised her next to Neymar on Berlin in the 2014/15 season. He has reunited with the Brazilian star and also has by his side Kylian Mbappé to form a powerful attack.

Lionel Messi will make his debut with PSG in the UEFA Champions League (Photo: REUTERS)

The cast of Pochettino has started comfortable in the League 1, with five victories out of five in the first days. Despite not having all his figures available, he has achieved a full of triumphs, with 16 goals for and five against.

For its part, the Belgian team faces its fourth consecutive group stage appearance Champions League with the desire to reach the knockout phase for the first time, although with the certainty that it will be difficult to sneak between the privileged positions with rivals of such caliber.

Those led by Philippe Clement come from suffering a humiliating defeat by 6-1 in view of Gent just before the international break, but they got back on track by winning by 3-0 about him KV Oostende The last friday. They are hosts against one of the strongest teams in Europe but their coach said that “It’s one of the easiest games of the season because we only have things to gain and nothing to lose”.

The last time PSG and Witches faced each other, it was in the group stage of the UEFA Champions League 2019/20 and the French cast achieved a victory by 5-0 on Belgium before a 1-0 at Princes Park. In that edition, the Parisian team reached the final of the contest and lost to Bayern Munich.

Messi’s dream of winning the Champions League again begins: his favorite victims in the tournament and the almost impossible record to break
The great gesture of Lionel Messi with a fan and his post in the preview of the premiere with PSG in the Champions League
The Bruges coach surprised before facing Messi’s PSG: “It’s one of the easiest games of the season”