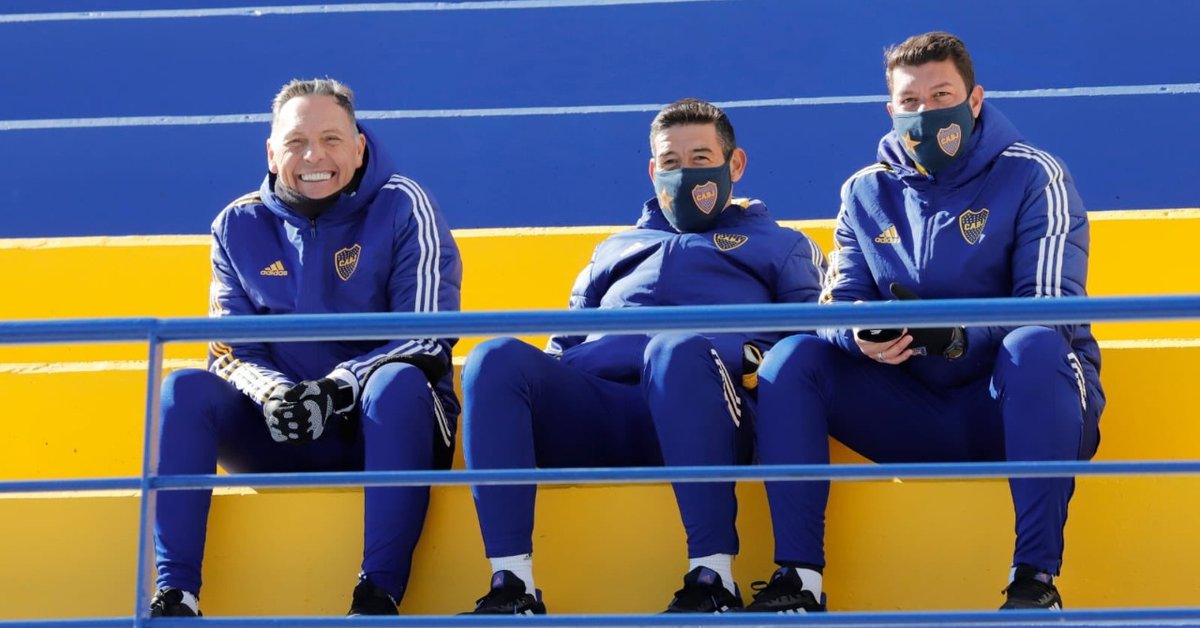 Russo with Juan Krupoviesa and Sebastián Battaglia, who lead the Boca Reserve

After 6:30 p.m. on Wednesday, the Boca contingent landed at the Ezeiza Airport after spending the night in Belo Horizonte after the dispute for the rematch of the Copa Libertadores round of 16 against Atlético Mineiro, the disturbances caused after the elimination and the statements of some implicated in a Brazilian police station. At the precise moment they touched Argentine soil, the members of the squad, coaching staff and managers were notified about the mandatory isolation order issued by the Ministry of the Government of the Nation.

Boca not only refused to return at the stipulated time, but also missed a day of training thinking about what is coming: on Saturday from 20.15 he will visit Banfield for the second day of the Professional League. For that commitment, in principle, he will not be able to count on any of the 24 footballers who traveled to Brazil for the isolation process to which they must undergo immediately. What’s more, Frank Fabra It cannot be considered either because he just returned to Argentina last Monday after his license and he also remains confined.

Battaglia would lead Boca next Saturday against Banfield

But apart from the shock before him Drill At the Florencio Sola, Boca will have a midweek date against San Lorenzo (Tuesday, July 27 from 9 at the Bombonera) in which he could not use his best figures because of the isolation. They would only have chances to act on Sunday, August 1, for the fourth date of the Argentine tournament against Talleres in Córdoba.

So, if the AFA and the Professional League do not give rise to a possible request for postponement of the next two commitments, Boca will be forced to improvise with a group of youth who could join Edwin cardona, with Sebastian Battaglia (Reserve coach) as a coach, taking into account that Miguel Ángel Russo and company will be subjected to isolation like the rest.

Who are the values ​​that appear in the First Division and can they be considered against Banfield and San Lorenzo? Goalkeeper Agustín Lastra, defenders Eros Mancuso, Balthazar Bernardi, Nahuel Genez and Valentín Barco, Santiago Pérez, Lisandro Mércuri, Ricardo Grance Martínez, Kevin Duarte, Matías Olguín and Simón Rivero, midfielders Ezequiel Fernández, Franco Cáceres, Gabriel Vega, Iván Baumwolllspinner, Maximiliano Rolón, Damián Puebla and Rodrigo Montes, plus forwards Israel Escalante, Ezequiel Almirón, Erick Bodencer, Lucas Palma, Julián Viollaz and Vicente Taborda. They all belong to the Reserve or Fourth Division directed by Roberto Pompei. These names could be added some others from the Fifth or Sixth.

If necessary, the idea is for Battaglia to work with them in the previous hours, having permanent contact – remotely – with Russo and direct with Juan Román Riquelme. The Reserve fell 1-0 to Unión de Santa Fe last Friday and had Mancuso, Bernardi, Genez, Montes, Fernández, Vega, Taborda, Almirón and Escalante as headlines (Ramiro García, who is in the bubble, saved, while the substitute was Agustín Lastra). Remember that Valentine Boat played in the First against him Tatengue and is available, just like Edwin cardona.

Ameal exploded after what happened with Boca: “It was a dispossession, they disrespected us”
From the pineapples of Rojo and Izquierdoz to the provocation of the president of Mineiro: all the videos of the incidents of the scandal with Boca in Brazil
Atlético Mineiro responded to Boca’s statement and asked for sanctions: “All the confusion was caused by the players and staff of the Argentine club.”