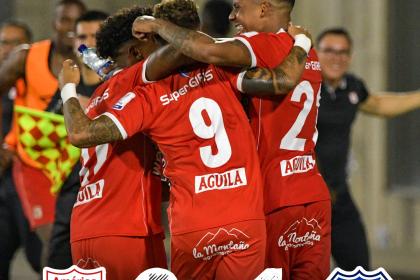 América de Cali defeated 2-1 this Sunday against Millonarios in the first game of the B quadrangular of the BetPlay II-2021 League, a commitment made at the Romelio Martínez Stadium, in Barranquilla, behind closed doors.

Emotions were reserved for the complementary period, when the changes worked for Juan Carlos Osorio and an error by goalkeeper Esteban Ruiz ended in the lead by Joao Rodríguez.

Juan Carlos Osorio made two variations with respect to the starting team that he had used in recent days: Joel Graterol and Mauricio Gómez in a very tactical match in the first half, in which defenses prevailed over attacks, few arrivals at the gates thinking more in avoiding to receive goals that in making them and a little transit of the destabilizing men.

The action was always in the middle of the court, with a lot of study by both rivals and the movement of the ball was slow. More concerned with containing than with generating in the opponent’s arc.

On a neutral court, the Albiazul proposal in attack was much clearer, with several arrivals from the left sector, especially with Daniel Ruiz.

About minute 2, Luis Alejandro Paz fouled Ruiz and the blue player fell to the edge of the area, but Andrés Román’s frontal charge was touched by a red defender who was on the ground and went to the corner kick.

Mackalister Silva finished over the horizontal at 11. Ruiz also did it at 16 with a hoot that Graterol touched to send the corner kick.

While the Albiazules bet on the left sector to try to have some revenue, the Reds did it on the right with Deinner Quiñones taking advantage of his ability and changed profile.

America reached the rival goal for the first time in the 23rd minute with a right hand from Jeison Lucumí that passed near Esteban Ruiz’s left post. The rest, nothing happened in the areas and the ball’s access to resolution areas became difficult. A foul on Deinner Quiñones near the crescent at 42 allowed Lucumí to charge, but the ball went over the crossbar.

In the second period there were no changes, but the meeting took on another dynamic. At minute 8, Arrieta’s shot was rejected by goalkeeper Ruiz with his right arm.

But at 10, Mackalister Silva put his team ahead when he received a cross from Émerson Rodríguez from the left, initially headed behind Kevin Andrade, Graterol rebounded and with Andrade’s passivity and with the goal alone, the blue-white midfielder barely got his left hand to score the 0-1.

Mauricio Gómez, who returned to start after several dates with a poor performance, saw the yellow at 13 when hitting Daniel Ruiz with the taches. A play that could have ended with expulsion due to the recklessness of the offender. Jerson Malagón entered for Luis Alejandro Paz and Rodrigo Ureña for Larry Angulo at 17. Osorio implemented two more changes at 25: Carlos Sierra and Joao Rodríguez for Mauricio Gómez and Jeison Lucumí.

Alberto Gamero also made two modifications in order to maintain the result: Elvis Perlaza for Daniel Ruiz and Andrés Gómez for Émerson Rodríguez at 29. Then Andrés Murillo did it for Mackalister Silva at 33. Carlos Sierra was booked at 34 for a violation of Andrés Llinás.

Adrián Ramos appeared after the 35th minute on a free kick. Subsequently, a Sierra header hit Andrés Murillo’s left arm and referee Wílmar Roldán gave a penalty that ‘Adriancho’ charged at 39, tricking Ruiz on the right post and achieving 1-1. Gustavo Torres replaced Ramos at 40 to seek a new air in the scarlet attack.

At 42, Llinás made a bad rejection, the ball was left to Gustavo Torres on the right, he put the center, the goalkeeper Ruiz went wrong and Sierra headed down the ball to Joao Rodríguez so that he would push it flush with the grass to convert on 2-1. Marlon Torres and Valencia received yellow cards in the 49th minute, before América celebrated an important victory over one of the favorites in the bracket.

On the second date of the quadrangular, America will visit Tolima on Thursday, December 2 (6:00 pm), while Millonarios will receive Alianza Petrolera that same day (8:00 pm)

With a good reaction, America beat Millonarios in group B