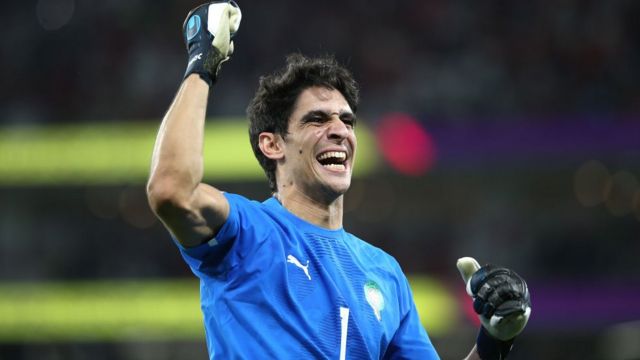 Morocco has earned a place of honor in the Qatar 2022 World Cup. For the first time, the African team advances to a semifinal, after leaving Portugal behind. The selection not only points to its favor eight unbeaten games but seven clean sheets. An achievement that is due to its star goalkeeper: Yassine Bouno, better known as Bono.

“We are here to change the mentality and get rid of inferiority,” said the 31-year-old goalkeeper. “Morocco is willing to face anyone in the world, beyond the semifinals and anything else.”

Bono has captured the attention of this World Cup for feats such as those he demonstrated in the match against Spain, when he saved two penalties and did not allow a goal in 130 minutes. That game, which left the Spanish team out, became a historic milestone for Moroccan football.

“We have changed this mentality and the generation that comes after us will know that Moroccan players can create miracles“, he declared.

The goalkeeper, who curiously has developed a good part of his career in Spain, comes from having an outstanding role as a goalkeeper for Sevilla.

His performance earned him consideration the ninth best goalkeeper in the world at the Ballon d’Or gala upon receiving the 2022 Yashin Trophy and win his first Zamora Trophy as the goalkeeper with the fewest goals scored in the 21-22 season.

Bono became his team’s hero in March 2021 against Valladolid, scoring a goal in the 93rd minute to equalize. That feat on the part of an archer was not had gotten in a decade within the Spanish League.

Yassine Bouno was born far from Morocco: in Montreal (Canada). She returned to her parents’ land when she was 7 years old. Since he was little, he showed an interest in football and was part of the Wydad Casablanca club, but his father was against him dedicating himself to sports. Nevertheless, Bono insisted on being professional.

He left Morocco when he was signed by Atlético de Madrid. The experience did not turn out what he expected and he gave up. He spent two seasons with Zamora (2014-2016) and then with Girona (2016-2019). Until he ended up at Sevilla.

His life has been linked to Spain. However, it is known that he is a great fan of Argentine soccer and fan of River. “The first shirt my dad gave me was from Argentina,” the goalkeeper said some time ago.

A close relationship to which his peculiar Argentine accent is attributed. “I am more Moroccan than anything else. What happens is that when I arrived in Spain I learned with Argentines and my accent stayed a bit,” she once explained.

His great idol is Ariel Ortega, the former Argentine soccer player better known as “El Burrito Ortega.” Bono even admitted in an interview that his dog is called Ariel, in honor of the River player.

Now the eyes of the world are on Morocco. The gloves of its star goalkeeper have helped the African team achieve its best performance in a World Cup, after Mexico 86. Will it be Bono’s turn to face the Argentina team? We’ll see.

Remember that you can receive notifications from BBC Mundo. Download the new version of our app and activate them so you don’t miss out on our best content.

Who is Yassine Bounou, the Canadian-born Moroccan star goalkeeper who has an Argentine accent?