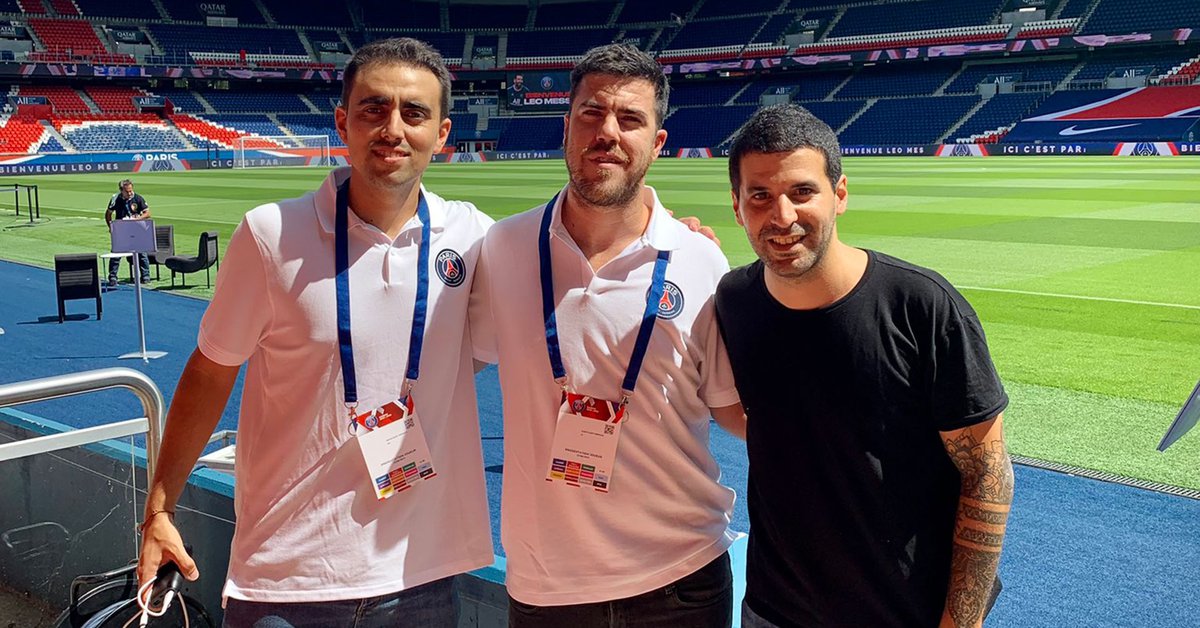 Tomás Marcó del Pont (center) and Pedro Caffa (also in white, next to him), in the Parque de los Príncipes

One of the most surprising things about the spectacular landing of Lionel messi in the PSG last Tuesday was the content published from the official social networks of the French club. Photos and videos of great quality but also the speed. From the first minute that the Argentine star stepped on the French airport, a camera followed him everywhere and in the club’s accounts in Spanish they began to publish videos and photos that received thousands of “likes” in a few minutes. Users went crazy. The accounts exploded of followers: in a week the Twitter account went from 500 thousand to 793 thousand followers and on Instagram they went from 19 million to 46.

One of the two responsible for these contents is the Argentine journalist Tomás Marcó del Pont, 32 years old. From Barcelona he works in the agency Samba Digital as Community Manager (CM) in charge of all the content published in the Paris Saint Germain accounts in Spanish. Their role is typical of a CM: develop the content plan, think creative ideas, generate the content and publish it on the different platforms. In addition to being attentive to the reactions that these contents generate and the responses. But last week he broke his daily routine. “It seems that Messi is coming” was the rumor in the agency and in the French club. And since Friday everything happened too fast.

How did you plan the coverage of Messi’s arrival? Because there was very little time since it is confirmed that he goes to PSG until he arrives …

“Yes, very little time. Hours! We already started to think and send ideas on Saturday because it was already a possibility that Leo would come to PSG, but nothing confirmed. They from France had their ideas too, so we all put together a plan. The Sunday after his conference in Barcelona they send us urgently to Paris. On Monday we were already in different meetings putting everything together. It was all very fast. For instance, there we had the idea of ​​his plaque in front of the monument to the Flag in Rosario of the current Leo, taking by the hand the Leo as a child with the Newells shirt. That post broke everything, it had 200 thousand organic likes in a few hours, only in the accounts in Spanish.

Tomás left for Barcelona in October 2019 after five years of working in the newspaper’s writing The nation. “I felt like I needed another life experience and decided to leave. I arrived and got a job in a hostel at night from 00 to 8 in the morning, for two mangoes. But then two years ago I joined the agency and started with the PSG account. First with the contents of the site PSG.fr in the Spanish version and in September with the accounts of social networks, twitter and facebook, such as CM.

The two Messi: with Newell’s shirt, as a child, and with PSG, today. A post that was born in the creativity of the agency and that had great repercussion

-How is the agency team?

-We are two in the team of accounts in Spanish, Twitter and Facebook (Instagram is global). Pedro, from Murphy (also Argentine) and I, who am the community manager. Behind us there is a design and photo and video team that is quite large.

-PSG is a well-known club full of stars, so the networks were very active.

-Of course, and the accounts had already been growing a lot, the Twitter account was considered one of the best in Spanish. But with the arrival of Leo everything went to hell, exploded through the air. The revolution that his arrival in Paris generated is incredible.

-How is the interaction with PSG? Do they approve of your content?

-Yes, they approve of everything. But luckily we have a lot of freedom and their confidence, especially after very good results with what we did before and with the arrival of Messi. We always ask them first, especially if it is something very played or on a subject that we know that PSG wants to take care of, but we have total freedom. That is why we interact with Bizarrap, WOS, Duki, Nathy Peluso, etc. They pass us content that is for the French account and we ask them for things too. Every so often we have meetings with them and we present ideas to do with the players (important dates, birthdays) and from Barcelona we ask them to record videos, greetings, etc.

He was champion with Maradona in Boca, he worked as a translator for Gallardo in France and told unpublished details of the Messi revolution at PSG
Who is Bob, the shadow of Lionel Messi in his early days as a PSG player
Similarities and differences between Maradona and Messi after being thrown by Barcelona