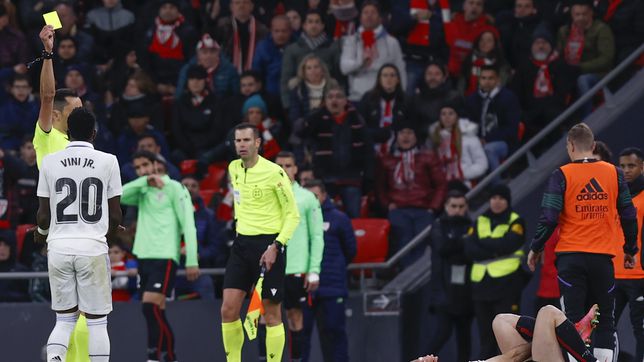 Prestige victory for Madrid, because winning at San Mamés gives it. The Cathedral continues to be the main stage and to attend this event Ancelotti started where he ended at La Cerámica, with a vigorous team. Neither Kroos nor Modric were in the starting lineup, nor was the intermittent Rodrygo. He chose a team capable of offering more energy, with an average Valverde-Camavinga-Ceballos and with Asensio, who was almost as important in Vila-Real as the Andalusian, in attack. In that decision there was something of a reward for those who saved the Cup on a difficult night and also something of the need to recharge batteries in a field that demands a lot.

It was a good decision. They all worked well or almost (the almost is because of Vinicius) and it is worth noting Ceballos, very active and without the abuse of driving that had been weighing him down, and that of Camavinga, convincing in the role of center midfielder. I do not praise Nacho because it is not necessary. He plays well whenever and wherever he plays. He is, of the entire squad, the player with whom Ancelotti is being most unfair. It was a game of good news for Madrid, won with two great goals, one from Benzema and another from Krooswho appeared late in the second half, like Modric shortly before, when Athletic gained danger with the entries of Muniain and Guruzeta.

The loose nut of Madrid was Vinicius. He did little up front, well marked by De Marcos, but that can happen. What should not happen is that he does too much of everything that is not playing. Once again he was distracted and little by little he became the focus of the few problems that occurred in a correct game. Ancelotti was even seen reproaching him for such a mistake and he ended up substituting him when he had a yellow card and Athletic threatened a tie. And the 0-2 came from his substitute, Rodrygo. They beat Vinicius and insult him, it’s true, but he has to prevent that from derailing him, which is just what his markers and rival audiences want.

While others advance, Vinicius lags behind