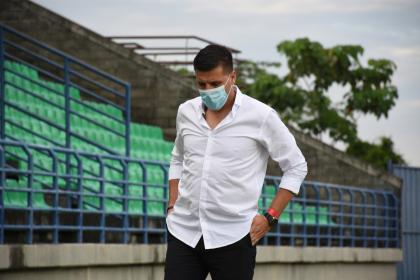 The news was unexpected but not as much as the reaction of the fans, who on social networks expressed their dissatisfaction with the possible arrival of Juan Cruz Real to the technical direction of Atlético Junior.

With the numeral #SiLlegaJuanCruzVotoPorPetro it became clear that the DT is not the one they wanted to see in replacement of Arturo Reyes, who was charged, without giving the right to defense, the elimination of the Betplay League final.

But, why this fierce opposition to Cruz Real? The truth is that among the candidates who have sounded in the since the sudden dismissal of the previous DT, it would be the one who plays a more showy game, more launched on the attack. With Lucas Pusineri the processes have required a long time, while Cruz arrived at América de Cali and in the following season he was already champion. With Gustavo Costas, the other candidate, it is true that he has a very broad track record and is the one with the greatest friction and experience, but his school is frankly defensive, perhaps the last thing that the Barranquilla fans approve.

What does Cruz Real have to show?

You have to stick to his two previous experiences: Alianza Petrolera opened the door to Colombian football for him and it was a team that became a leader, that gave a very good show and that, full of limitations, was the sensation of the tournament between 2017 and 2018. A year later he reached Jaguares (19/20), without the same success but with a clearly offensive stamp, and then came the champion campaign with America, which in any case ended abruptly and with an average performance of 48 percent. hundred.

Cruz Real had the wisdom to incorporate the experience of Adrián Ramos, Luis Paz and Yesus Cabrera, the talent of Duván Vergara and the dedication of Rafael Carrascal, and the impetus of men from the quarry who shot up thanks to him such as Santiago Moreno, Luis Sánchez, Pablo Ortiz and Kevin Andrade, among others. The first one has already gone to MLS, which serves as an example of a task that seems transparent for the coaches but is ultimately key: valorization of their own talents and money to the club’s coffers. Everything came together to be champion in 2020 with the scarlet team.

What is your philosophy?

“First, not to do things to the players that I did not like them to do to me. Second, to interpret that they were players who had won, but that they had to renew their motivation to continue doing it and, thirdly, I found myself with a group of players who were not difficult to convince of that. They were very generous, “said the coach in The coaches’ voice.

“I like teams that are protagonists, that generate the greatest number of arrivals at the rival goal, because that will lead us to score more goals. Because that will lead him to defend away from his goal. That the circulation of the ball be fast. I like dynamic teams, or only in the matter of transfers in the race if not they are dynamic in the movement of the ball, I do not like teams that are slow in that movement, “he added.

What are the doubts?

Cruz Real reaps loves and hates and that explains the uproar that his presence in Barranquilla generated to talk about his involvement with Junior. One of those who expressed doubts when DT arrived at América was Óscar Villada, his assistant at Alianza Petrolera.

“He is a coach who is a bit pedantic, apart from that, mentally he is not very stable. Where he has gone he has not done well, but I have no resentment with him … When I started working with him he told me that he worked with him. Bielsa style, a methodology from 40 years ago. One day I told him that the team lacked the ball and he got angry, “Villada said on Caracol Radio.

That and the reality of having managed only one large club so far (before it went through Jaguares, Alianza, Estudiantes de Mérida and Belén de Costa Rica) make the fans have doubts. To their peace of mind, he directed America in Libertadores Cup.

In any case, at 45 the Argentine is ready to take on what would be his sixth club. Like everyone else, what you need is an opportunity. Then, in his own words, everything counts when writing the story: “the player ultimately evaluates a coaching staff for two things. One is knowledge and work capacity and the other is because of what one is as a human being. , by how he deals with the person before the player #.

What is Junior looking for and what does Juan Cruz Real offer him? Debate for new DT