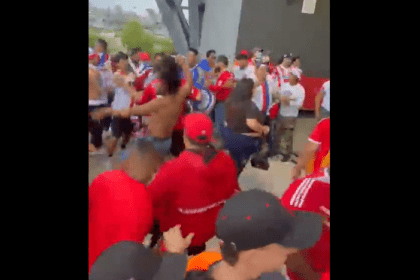 While Colombian athletes try to raise the country’s name, the so-called fans of various teams are in charge of throwing away all reputations.

The only thing missing was for the bar of a FPC painting to star in a pitched battle with fans of a foreign club … From this Sunday they can boast of that.

At the end of the week, Independiente Medellín and América de Cali played a friendly match in New Jersey, United States. Duel that ended with a 3-0 scarlet win.

Although it was the opportunity for foreign fans to return to their teams in a stadium, as happened with Millonarios and Nacional in the Florida Cup, the behavior of several was disastrous.

In the preview of the match, América bars engaged in a “bare fist” fight with Olimpia from Honduras, according to journalist Willy Rodríguez. Everything was recorded on video and quickly went viral on social networks.

What were Hondurans doing at Red Bull Arena? It turns out that hours before América-DIM, Olimpia and Motagua, that country’s classic, played a preseason game. Duel that ended in fights between players, coaches, coaches and others.

Although the trigger for the confrontation is unknown, the truth is that Colombians and Hondurans starred in unfortunate acts of violence in a country that opened its doors so that fans had the opportunity to see their clubs again. Completely reprehensible …

Fight between fans of América de Cali and supporters of Olimpia de Honduras at the Red Bull Arena in New Jersey. Before America vs Medellín, Olimpia and Motagua also played friendly and the two bars met in the corridors. Shameful! pic.twitter.com/B8FQD7mbCX