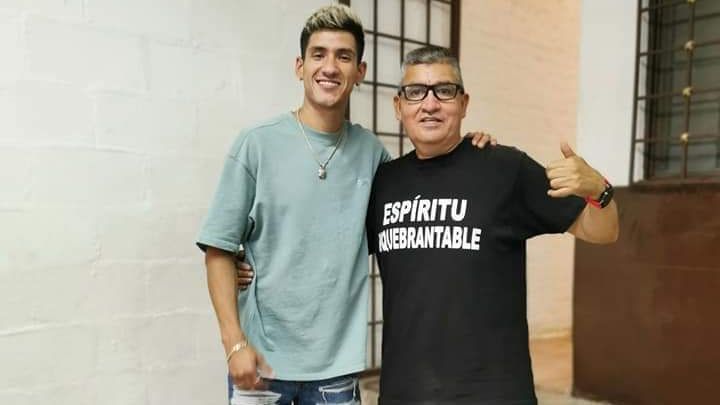 Uriel Antuna went from being a “King of the Neighborhood” in Durango to training in a “corralito”, which later took him to Santos Laguna to make his professional debut.

Uriel Antuna He came to professional soccer after in his childhood he was considered a “King of the Neighborhood” for being a scorer on the dirt courts where he played in Lerdo, Durango.

He later trained in aplaypen” that they enabled as a training ground for the Charly Soccer Training Center of Carlos Escandónwho took the ‘Witcher’ to Saintsteam in which he debuted, but has also been close throughout his career, in which he currently shines with Blue Cross after passing through Chivas.

Antuna came to Charlie Soccer Rebound”. Carlos Escandon saw kevin antuna, Uriel’s brother, while kicking a boat on a court and caught his attention. Escandón dedicated to supporting children, he decided to go to the home of the current soccer player’s family Blue Cross to go for the minor.

“I arrived with my mom and dad and knocked on the door, they thought I was going for Uriel Antuna, because Uriel Antuna He was the king of the neighborhoods: from a young age he was a scorer, a champion. As I focused more on the younger children, I arrived at the house and her mother and her father came out, they told me “she is not Uriel”, I laughed and told them that I was not going to Urielwho was going to look for kevin antuna‘I come to invite you to join the Training center‘” was the first contact between Charlie Soccer and the family Antuna.

While Uriel shone in the neighborhoods of Lerdo, his brother Kevin was already part of Charlie Soccerbut the oldest of the Antunas tried to attend matches and training to closely follow his blood relative, until he approached Escandón to ask him for an opportunity to join the training center.

“Uriel he realized it, because we played in the dirt fields, there where all the race of the Lerdo ranches play, but Uriel he was the star of the teams, everyone loved him and we trained players. Uriel He always went to see us play, he went to see his brother play, until one day he approached me and told me to give him a chance to train and that’s how he arrived Uriel Antuna, came on a bounce. we were going for Kevin Y Uriel came on the bounce. He came as a child with me and since then he has been growing up with us”.

Charlie Soccer was born on May 26, 2008 for a promise that Carlos escandon he did to his son. That first generation was made up of 15 children, currently it has more than 100 and more than a thousand infants have passed through that “corral” that has become a springboard for different youths to reach the basic forces of Santos and Atlas, with whom they maintain good relationship.

“A promise that I made to my son, after an operation that they did for his tonsils. We have a patio, a corral, as we call it here in the north, a corral behind the house. I told him that, if it went well, first of all, God and the Virgin of Guadalupe, I’m going to bring many children to train here, to play soccer and thank God the operation came out very well and from that day on the Charly Soccer Training Center”.

Escandón, who is an accountant by profession in the morning and during the afternoon helps underprivileged children to stay away from delinquency through sports and soccer, calls the field where they train “corral” or “corralito”. the same one in which Uriel Antuna it was forged

“It is a corral, there was a garden, there were little trees there. We clean, it’s not even, it’s all uneven, there are pebbles, that’s why when visors go, they tell me that they can’t explain how the children play and don’t blow up the fence. The earth gives you strength, it is the miraculous earth. Once I put grass, it’s 1,500 square meters of grass and it lasted me a week because they say that grass should be used little, but soon I’m going to stop training and it’s just dirt, with the dust, with the stones, with what go out there, and it’s uneven, I don’t have it level because you level it and quickly the children step on it and make it uneven”.

The relationship between Uriel and Carlos is strong. The footballer of Blue Cross He keeps one of his first mentors up to date on his career, he has even taken him to each team he has played for, regardless of whether it is European, although due to a pandemic he has not been able to visit the Noria and the Azteca Stadium, the field where now it is the house of Uriel, who when he can, prior to important events, returns to the “corral” of Charlie Soccerfacilities where he used to arrive in huaraches, as hundreds of children do now.

“Uriel He arrived in huaraches to train. As his parents always got together, his family got together in the pool, because in Lerdo there are many pools and Uriel never missed a training session. He would stay in the pool for a while and he would leave in huaraches, but he was never absent. He was the first to arrive and the last to leave.”

“Uriel He goes before a World Cup to train with me on the ground. He comes back, he begins to touch the ball, to finish off and since there are very good children, they give him feedback and he begins to train with the kids, in addition to that we throw the inter-squads”, he concluded.

Information from Javier Rosas was used in the writing of this note.

Uriel Antuna, the ‘King of the neighborhood’ who was forged in a “corralito”