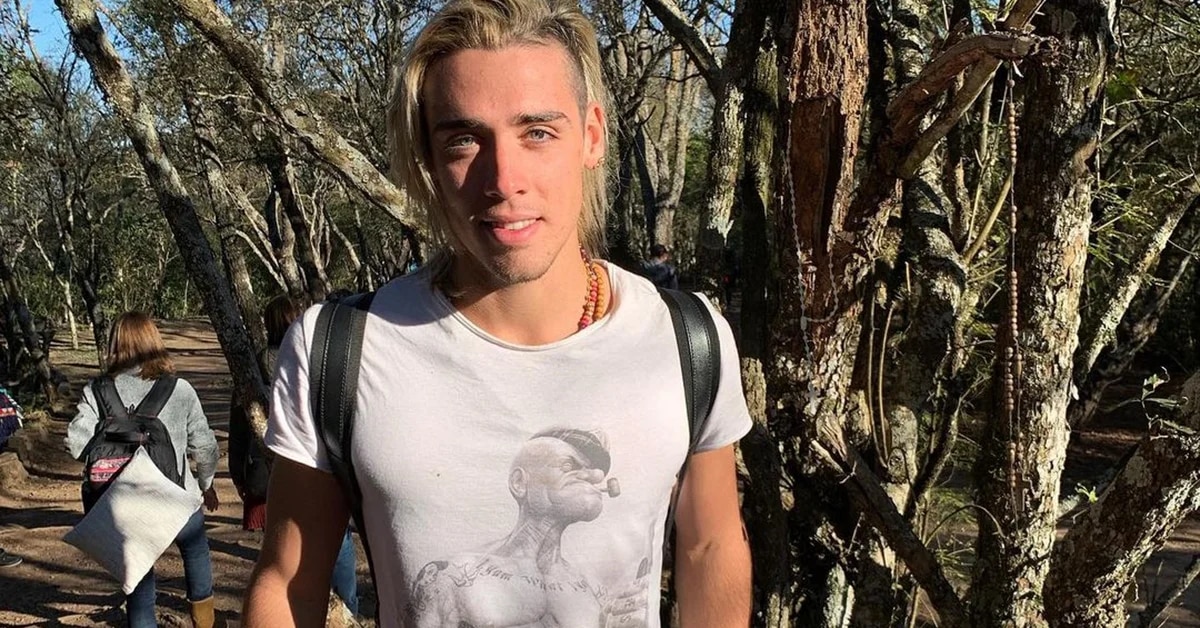 Claudia speaks fast. In a hurry. Agitated. He hasn’t slept in more than two days. From Buenos Aires, he experienced the war in the first person. It is one more story that he carries on his shoulders out of the many that took place –and take place– in Ukraine, but that does not stop it from being shocking. The dark thread that linked a father in Argentina with his son crossing Ukraine from end to end to escape death amid permanent risk. Claudio is the father of Claudio Paul Spinellithat striker with physical features similar to Caniggia who quickly earned the nickname of the Bird and added popularity in the Argentine tournament before leaving for European football. But this is not a sports chronicle, it is the stark account of the odyssey that an athlete went through for two days to be able to flee from the war: a call in the morning, an escape with the clothes on, endless trips on the road and walks in subzero temperatures.

“They are attacking, grab your things and go”. Words more, words less, is what he remembers Claudio saying to his son on the phone during the early hours of Thursday in Argentina. It was early in the morning in the country when Cielo López, his daughter-in-law, told him that he was on a stopover in Paris about to embark on a Kiev that was surprised by the first Russian attacks on Ukrainian territory. Claudio told Cielo to stay in France and started calling the striker. He took more than an hour to communicate.

The Bird landed almost six months ago in the Ukrainian Premier League Oleksandria, a club in a city to the south and about five hours from the capital Kiev. Also about 300 kilometers from the border with Russia. “When I heard his voice, I breathed… It was difficult, he got up when his father told him that they were attacking…”Claudio Sr. was sincere before Infobae to recount the beginning of this odyssey that began more than 48 hours ago and had a positive ending at noon on Saturday when her son managed to escape to Poland.

The 25-year-old footballer contacted his club as soon as he became aware of the Russian attack: they offered him refuge, but they could not give him facilities to leave the country. The decision, the same, was made between the athlete and his father in “five minutes”. He kept essential belongings in two suitcases and abandoned his apartment and his vehicle. Aboard a truck that Oleksandria got him, he began a journey that would last two days. Almost a thousand kilometers separated it from the border with Poland.

Speaking the little Ukrainian he was able to learn in these months, Claudio Paul opted for English to communicate. The trip by car allowed him maintain the battery of his cell phone and every time he had a signal he talked to his family via WhatsApp. His father killed the nerves of time exposing the situation of the athlete before the media in order to find a diplomatic channel that would give him instructions on the steps to follow and with the idea of ​​raising awareness in the face of this event full of violence. And he watched the news. Day and night. He was looking for information about new Russian attacks.

Father and son: the Spinelli together a few months ago (Photo: @spinelliclaudio)

The around 800 kilometers between Oleksandria and Lviv, the last city before the border, took Spinelli more than 24 hours.. The journey at the pace of a man took place between military checkpoints, war tanks and the deployment of the ukrainian army who was facing the first throes of the “military operation” that Putin promoted with the singular argument of “demilitarizing and denazifying Ukraine”.

“He was on the bus and he was seeing the tanks on the sides”, graphs his father. Once he finished the first part of the odyssey, of more than one day, the next stage arrived. The closer to the border, the greater the complications to put an end to his Ukrainian stay. They rented a car in Lviv, but had to give up after a few kilometers. It was impossible to move forward. With two suitcases, he began a 20-kilometer walk. A suitcase did not last long: he must have left it lying on the side of the road. With little battery in the cell phone and no signal, on the other side of the world his father suffered while waiting for a contact.

The situation became tense. In the middle of the night, with temperatures below zero, the cold began to permeate his conviction. The cold “pierced his body” even though he had three jackets and a hat. He was already entering his second day of travel and there was no movement at the border. He communicated to his family the idea of ​​returning: “He was going to return to the first city on the border with Poland. He thought of giving up…”. He spent around 12 hours to cross the border, with his last bag about to falter.

Meanwhile, he exchanged messages with the coach of the Argentine volleyball team, Marcelo Méndez. He communicated with audio his desire to arrive in Warsaw to travel to Paris and there meet his wife, Cielo, whom he married a month ago in a church in Puerto Madero.

The man who led the country to conquer the volleyball bronze medal during the Tokyo Olympics he arrived weeks ago in Asseco Resovia, which is in a city 100 kilometers from the Polish/Ukrainian border. He heard Spinelli’s situation through the media and immediately put himself under the orders of his compatriot’s family. They kept in constant contact to see if I could collaborate with him once he crossed the dividing line between the countries. There wasn’t much room for formality during those hours. “He’s getting a cold shit in his tail”, was told about the situation he was experiencing while the access channel was hours and hours late. The thermometer in Lviv reached temperatures below zero and the exhausted, restless body of the footballer already felt it. Méndez, meanwhile, searched the Waze how much a possible trip to the border would require to go look for it.

Until the most awaited message arrived: The Foreign Ministry confirmed that Claudio had been evacuated from the territory in conflict at the same time as his colleague and compatriot Francisco Di Franco, who was able to leave Ukraine through the Romanian border.

“The fucked up were the early mornings. You watched all the bombings on TV like in the movies”, his father is honest hours after learning that his son was able to stay in the house of a Polish contact who got the embassy. Claudio Paul –in the house of the woman who finally went to look for him at the border– was able to bathe, eat and stop the delirium of living in war during those hours. After passing through Krakow, he went to Warsaw to wait for his flight to Paris.

“The Polish woman is a total genius. She played it and went looking for him. He came from 40 hours on the bus with all that that implies: leaving the entire apartment lying around, his car, his belongings.. All that trip with threats of all kinds, while all the places were bombed. With the fear that this could happen to you. He got there, had to walk 20 kilometers and on top of that he found a chaos of people. It was from a movie. A horror…”. Claudio summarizes in a few words the painful journey his son had to go through for more than two days to save his life.

The case of Bird Spinelli is one more of the thousands and thousands that are being replicated in the Ukrainian territory. His colleague Fabricio Alvarenga shared on his social networks the long queues he ran into on the border with Poland and another Argentine who is in the local Premier League, Francisco Di Franco, was able to flee via Romania. Brazilian soccer players from Dinamo Kiev and Shakhtar Donetsk managed to leave their refuge in the capital amid Russian attacks and they had a dramatic flight bound for the borders of the country with Romania and Moldova. The stories of these characteristics are repeated before the war escalation.

The Argentine soccer player Fabricio Alvarenga showed on his social networks the difficulties he faced to cross into Poland. Hours later, he said that he had been able to leave the Ukraine


“Yesterday he talked to me about football and I didn’t say anything to him… His career doesn’t matter to me now, let him come here with me and that’s it”, Spinelli father rushes on his son. The sport was left in the background. Innocent human lives are at stake regardless of origin, sex or religion. The truth is that Claudio Paul left behind his belongings, but also a dream and a job. When the most difficult hours of his life begin to be left behind, he will evaluate how to continue his working life, because football, after all, is that: his means of living. In this case, they hope that there will be an exception in local football so that he can carry out his work. But it’s too early to think about that.

“We suffer a lot. When I didn’t hear his voice for an hour, you had a hard time. You couldn’t turn off the TV and not see reality: you saw the bombing everywhere and he was there. Every time she spoke it was to live again. We had a very bad time. You have to take care of life, enjoy things. My son is about to return home, but I was there for a month and I fell in love with those hospitable people. I am hurt for them. Imagine this happening to us, bombing the city like this. It’s crazy. You can’t understand it.” Claudio begins to breathe more calmly, to live again. Now it will be time to make up for those three days without sleep while his son escaped from the war.

Videos of the desperate escape of Brazilian soccer players and their families through the streets of Kiev amid Russian attacks
After Russia’s invasion of Ukraine, tycoon Roman Abramovich relinquished control of Chelsea

Two days fleeing the war: the dramatic odyssey experienced by soccer player Claudio Spinelli to escape from Ukraine in the midst of the Russian attack