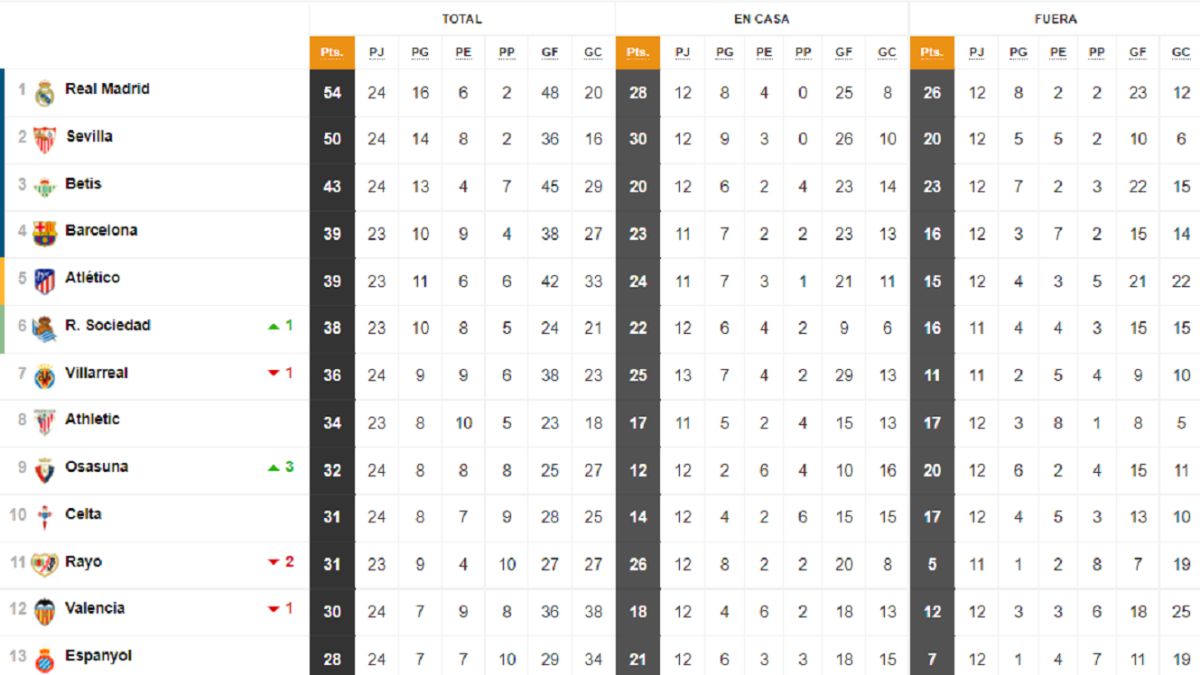 The fight for the title and for Europe tightens again. Real Madrid were unable to go from a goalless draw against Villarreal and only added one point, while Sevilla, their closest rival, beat Elche. Lopetegui’s men are four points behind the Whites. Betis, third, does not fail. Barcelona manages to stay fourth by saving a point on their visit to Espanyol. Atlético is fifth after beating Getafe.

Double intervention of the VAR in penalties by hand in the 24th day of the First Division. In the Metropolitan he did it in a factual action: De Burgos had called a foul for Lemar’s hand, but Las Rozas warned that the offense was committed inside the area and ended up signaling the maximum penalty. Ünal did not forgive from eleven meters. The other hand was pitted in Mendizorroza. On that occasion, they did have to go to the monitor for a hand from Jason in an action by Bryan Gil. Cordero Vega ended up pointing it out and Guedes scored. There was a third intervention, but factual. It was in the Catalan derby, a Gavi goal being annulled for Frenkie de Jong’s offside. Without this correction, Barcelona would have taken all three points.

The VAR did not enter, but it was claimed at La Cerámica: Real Madrid requested a penalty for Albiol hitting Vinicius with his arm and Villarreal for two red actions. One for Asensio and another for Carvajal, the latter action being likely to be a penalty.

Rui Silva’s penalty on Lozano. Negredo throws it and it is stopped by Rui SIlva, who had both feet in front of the line. He sees the VAR and repeats himself. Negro brand.

Montoro’s goal annulled by the VAR for offside.

The VAR warns of a hand inside the Ciss area, although Rayo claimed a previous foul. Alberola Rojas sees it and signals a penalty. Roger transforms it.

The referee goes to the monitor and annuls Aspas’ goal for using his arm to score.

The VAR warns of a penalty by Alberto Moreno on Vencedor for stepping on his foot. He points it out and Muniain transforms it.

Entrance from behind Merino to Luis Suárez that prevents him from finishing off. Munuera signals the maximum penalty. Luis Suárez transforms it.

Goal by Carrillo, who was ahead, but the ball bounced off Lejeune. The VAR recommends reviewing the review when considering that this offside should be sanctioned, since it understands that the Alavés player does not try to play the ball. Gil Manzano, after seeing the replay on the scoreboard, decides to cancel it.

Ocampos’ goal annulled by the VAR due to a previous handball by Fernando.

Lateral center in the Atlético area that hits Lodi’s hand. The VAR warns and González Fuertes signals a penalty. Bardhi transforms it.

Kroos’ goal disallowed due to previous offside by Asensio or Vinicius, but the VAR says they were in a legal position and it is granted.

The linesman disallowed Vrslajko’s goal as he was deemed offside, but VAR conceded the goal.

The VAR warns of a handball by Ocampos when he was in the barrier during the launch of a free kick. The referee signals a penalty after going through the monitor and Joselu scores.

The referee signals Saveljich’s penalty on Hugo Duro, but the linesman signals offside. The VAR says that he was in a legal position and the penalty is awarded. Soler transforms it.

Iñaki Williams’ goal disallowed for offside that ended up being granted by the VAR.

The linesman cancels Jorge Molina’s goal, but the VAR grants it.

Guido Carrillo’s goal that was annulled at the request of the VAR for committing a foul on Maximiano by snatching the ball from his hands.

The VAR warns of a Parejo hand with which he helps himself to score a goal. Alberola annuls the goal.

Negredo’s goal disallowed at the request of the VAR for a foul by Sobrino on Diego López.

The VAR warns of a handball by Pere MIla inside the area. De Burgos points it out and Modric converts the penalty.

Ledesma recklessly comes out to get the ball and hits Angel’s head with his knee. The VAR warns Del Cerro and a penalty is awarded. Muriqi transforms it.

Sancet’s disallowed goal that the VAR validates as he is in a legal position.

This is the First classification and this is how it would be without the VAR: matchday 24