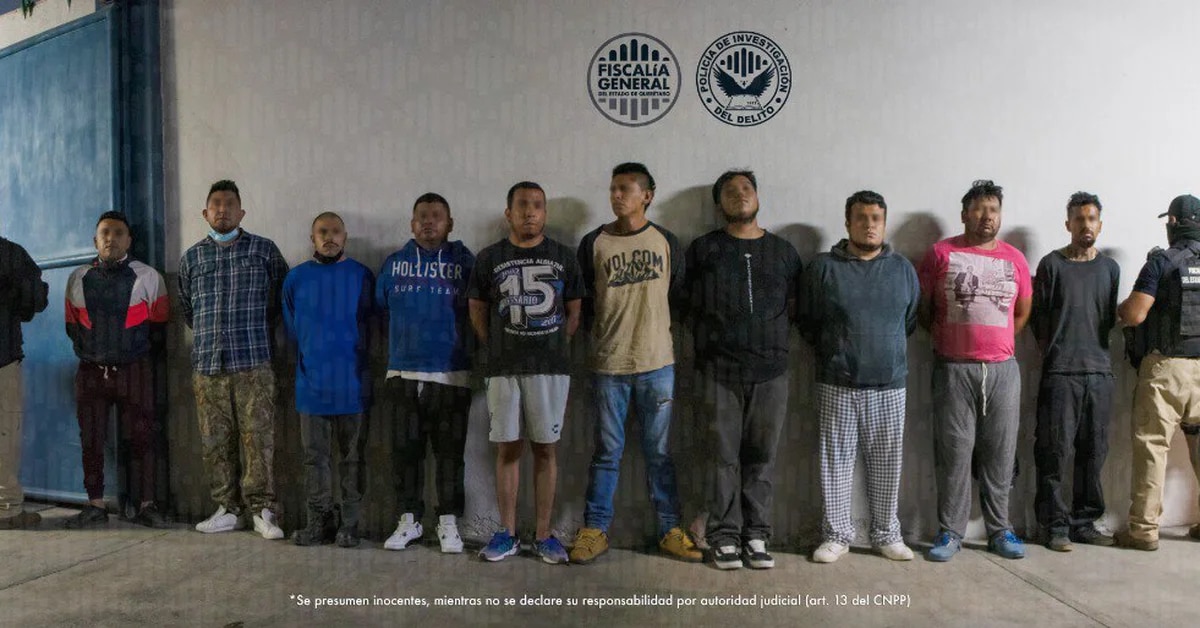 Through the fulfillment of 21 search warrants granted by the Control Judge of the Judicial Power, it is how the capture of the first 10 presumed responsible for the violent acts in the Corregidora Stadium on March 5 was achieved.

The State Attorney General’s Office (FGE) of Querétaro reported that arrested the first 10 people for their possible relationship in the events that occurred at the Corregidora Stadium on the night of March 5, 2022during the match between Querétaro and Atlas, which left 26 people injured, according to official reports.

Through the fulfillment of 21 search warrants granted by the Control Judge of the Judicial Power, it is how the capture of the first alleged perpetrators could be achieved. This occurred after on Monday, March 8, the autonomous body reported on the identification of 26 main aggressors (all men) who would have participated in the brawl on Saturday.

All those captured are men and they were detained with arrest warrants for their alleged responsibility in crimes such as attempted murder, violence at sporting events and apology for crime. The arrested men are: Jesús “N”, José Alfredo “N”, Iván “N”, Jonathan Carlos “N”, Víctor “N”, Adrián “N”, Juan Manuel “N”, Eduardo “N” and Edgar Emmanuel “N”.

During the match, the authorities allowed some fans to enter the field of play to safeguard its integrity.

According to the State Attorney’s Office, Through the analysis of 583 images, 78 videos and more than a thousand messages with information and anonymous complaints to 089, the criminal behavior of the 26 alleged perpetrators was identified. Likewise, information was extracted from the videos of the security cameras of the Corregidora Stadium.

Meanwhile, the detainees will be presented before the judicial authority to determine their legal situation, while the investigations continue, the Prosecutor’s Office detailed.

On Monday, March 7, the governor of Querétaro, Mauricio Kuri, advanced part of the investigation into the events at the Corregidora Stadium and assured that, Until now, the Prosecutor’s Office had a list of 30 people who could be related to the outbreak of anger during the game of day 9detailed to Millennium Television.

Although at the time Kuri did not disclose the names or details about the identity of these people (since the investigation is still in process), he assured that the corresponding authorities already have a line of investigation to follow in the investigation folder and reiterated what The folder includes the crime of attempted murder and criminal association.

Some families had to invade the field of play to protect themselves from the brawl in the bars (Photo: EFE/Sebastián Laureano Miranda)

On the other hand, the Secretary of the Government of Querétaro, Guadalupe Murguía explained that, of the 26 fans who were injured, 19 had already been discharged. One was in a very delicate state and another 4 were reported serious with head trauma. Most of the injured came from Jalisco (15 in total); one was from the State of Mexico and the rest were originally from Querétaro.

As part of the sanctions and measures that have been taken in this regard, the decision of the government of Querétaro to break relations with the company GES K9in charge of security at the Corregidora Stadium and hired by the Querétaro Club.

In addition, 5 public servants in charge of the operation and security coordination in Saturday’s game were suspended, since they did not comply with the corresponding protocols: Leonardo Flores Mata, director of Police Operations; Isaac Pérez Infante, in charge of the Field Unit; Agustín Martínez Ortíz, police officer; Carlos Mendoza Martínez, coordinator of Events and commissioner for the party, and Carlos Alberto Toscano Mendoza, responsible for the Risk Management Area of ​​the State Civil Protection Coordination.

For his part, the president of Liga MX, Mikel Arriola, assured that, as a security measure after Saturday’s tragedy in Querétaro, visiting clubs will be prohibited from entering upcoming matches, in addition to The Corregidora Stadium will be banned without receiving any type of soccer activity or event until the facts are clarified.

Querétaro Prosecutor’s Office confirmed 26 arrest warrants after violence at the Corregidora stadium
Tragedy in Querétaro: Mikel Arriola will be summoned to appear in San Lázaro
Record of violence and terror: the omissions in the tragedy of Querétaro- Atlas