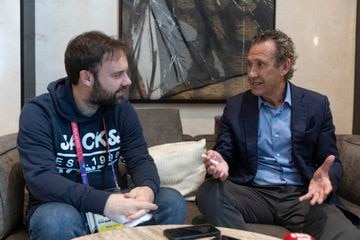 World champion in 86author, in fact, of one of the Argentine goals in the 3-2 final against Germany, Jorge Valdano (Las Parejas, Argentina, 1955) eyes shine when he talks about his country, about his team. He wears many years in Spain and he speaks in the majestic plural when referring to The Redbut in his memory is what he lived with the Albiceleste and in his heart the force that Messi provokes is as strong as the echo of his words. A voice more than authorized to talk about today’s final.

What do you think of the final? Are the best coming?

They are two of the favorites of the several that there were. Perhaps the ones that made the most noise when they fell were England and Brazil, but these are worthy finalists. They lost their virginity along the way. Neither of them arrives undefeated. But there are different categories also in defeat. France fell with substitutes, Argentina lost an unexpected game.

How did Argentina recover from that such a tremendous setback against Saudi Arabia?

That defeat had very positive effects on the team’s conduct. He managed to unite more and even give more sensation of trade. In the coach’s decisions, he ended up finding unexpected players like Enzo, like Mac Allister, like Julián, who gave him another dynamic, another security with the ball. Finally, after a rather rough journey, because, except for Croatia, Argentina had a hard time in all games, a stellar Messi appeared.

What else can be said about Messi? We are running out of words, Jorge…

It is very difficult to find words. I remember that in the late 1970s, a Brazilian journalist whom I greatly admire said about Pelé: “I live off them, where are the words!” With Messi there is a kind of literary contest to see who is capable of completing it as the star figure of the tournament. It is very difficult because he has decided to synthesize football. As was the case with Maradona, 10 seconds are enough for him to tell us what this game is.

Is he another Messi or have we seen two Messis in one throughout his career?

He is a genius, but a thousand matches give genius wisdom. One fine day he went from a right winger to a false striker and started a revolution at the Bernabéu. For what we are seeing now, more things had to happen. This was not decided by a coach, it was decided by time. He was taking energy away from him and he had to adapt to a more rhythmic football, more walking, but just as influential. Above all, within a team that knows how to play with a genius. That is not easy.

Is Messi a challenge to modern football?

Completely. It’s a serious challenge, too. A challenge that football will lose. Against the trends not even Messi can. In addition, he also does not have that much reel left to tell us that this game can also be played running a little less. The intensity has taken over football and suddenly the revolution is made by a guy who walks.

Do you think your career deserves a World Cup or is that thought too romantic for the reality of football?

Many people say it. I have been with Mauro Silva and if a Brazilian says that, it means that millions of people must say it. If there were divine justice, Messi would deserve this title. But I say that from my emotion, there are other emotions that are contrary to mine and they also count. And divine justice is not usually frequent…

Opposite will be France and especially Mbappé, which is another scandal.

Yes, Mbappé is a different scandal, almost antagonistic. There we have the demonstration that power is taking over football. For the trend to slap us, only Haaland was missing at this party (laughs). It’s another way to be fascinating. Soccer manages to discover original talents that we haven’t met before and who are imposing themselves resoundingly. Who can argue with Mbappé.

Play at another speed. He is a running earthquake.

And he has patience to wait for his moment. The athletic conditions that he meets are impressive. It is not the same as what Bochini said about Cruyff: “he runs a lot but he plays well…”. This one runs fast but he plays well.

Y then there is Griezmann, which has gone from being an 11 to being a 10 and now it is directly a whole. Is it being a World Cup of game generators rather than finishers?

What I’m seeing is that the midfielder that Sacchi said was half a player has now become a player and a half. Now his name is Griezmann, his name is Modric, his name is Bellingham, people with a huge field of action that gives you a lot of quality and gives you a lot of quantity. That player now has a very big influence on football. He plays a lot inside and having such a number of interventions, most of them correct and many unbalancing, is a blessing for any team.

In this turnaround in the game, Spain fell along the way… Victim of his style?

I still consider tiqui-taca as the base of our game. And I say our, uh… We are seeing very athletic football against which Spain cannot compete on equal terms. You can compete from technique. Now, the tiqui-taca helps you cover 75 meters of the field and Spain does it better than anyone. But the last 25 meters have proper names. That’s why Mbappé and that’s why Messi in the final. That depends on spontaneous generations, but I think that in the event that we do not have a differential in the last few meters, you cannot die and live with plan A. If things do not go according to the magic recipe, there is no need to resign. You have to find other ways.

Even the Dutch school changed with Van Gaal, the three central defenders, the withdrawal…

Yes, Van Gaal has been discussed a lot, even in the Netherlands they accuse him of catenaccioIt seems to me that it is exaggerated, but this is football in which the fight for space is being terrible because there are fewer and fewer. Van Gaal said: “If I can’t find space below, why don’t I find it above.” He took out two giants and ended up complicating Argentina. That’s what I mean by not resigning.

Is Madrid the best example that you have to be a chameleon?

In a combinative game, winning is important. I say it that I have exaggerated talking about the precious game, but soccer is not only beauty; it is passion, it is madness… It has many ingredients. And for that you have to learn from Madrid. All the ingredients are valid.

Even Guardiola signed Haaland, a physical marvel, a change on his booklet.

Yes, his tiqui-taca is already adding variants, the midfielder appears, he plays with a fake forward… or with two forwards. And now he’s going to have to seriously reckon with Julián. It is assumed that one leaves a World Cup with another status and this is a clear example.

You were world champion in 1986, these days your memories will surface…

Emotion has a very good memory. I remember absolutely everything. I remember the wait, the game, talks with teammates, with referees, that’s why I say that today we are playing a game that lasts a lifetime. Furthermore, by coming face to face with the past and the future, this party is going to become a celebrity.

Messi learned to be happy. That content type that he put everything inside, now he has begun to take it out. And that makes us face a more liberated player. It was what most distinguished Messi from Maradona. Still, there is still distance. Is not the same the “go there, fool!” Leo’s than shouting “sons of bitches” to a whole stadium like Maradona did (laughs)… We are facing a different Messi, without a doubt, much more influential.

How do these guys experience a final?

Maradona slept the same! I marveled because, being a secondary author, it was very difficult for me to sleep. Diego knew that he was not expected to play, he was expected to win the match. Directly. And yet they have so much self-confidence, they handle the show in such a way, that they don’t wait for it with anguish, they wait for it with happiness.

The first World Cup without Diego could be Messi’s first…

Yes… And Pelé’s state of health was going around, which caused a commotion. It is good that football has memory, that Maradona is honored with the fact that Argentina is in the final, that we have remembered Pelé, one of the great names in history. He is cute.

“The World Cup revolution is made by a guy who walks”