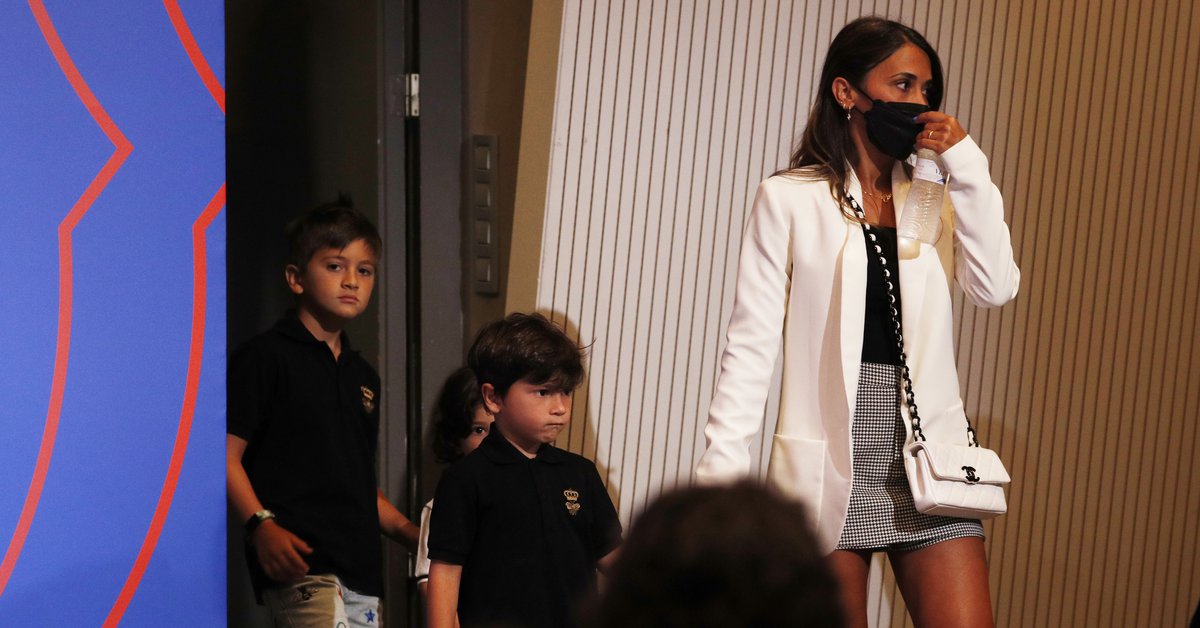 Antonela Roccuzzo, Thiago, Ciro and Mateo Messi, in the front row during the press conference of the father of the family

It is clear that this was not his wish, which is why the tears welled up so insistently. Lionel messi announced that he will no longer play in the Barcelona, the club he came to when he was just entering adolescence and in which he shone throughout his career, and there was his wife, Antonela Roccuzzo, and his three children, Thiago, Mateo Y Cyrus, to provide you with the support you so badly needed.

The young Rosario and the little ones sat in the front row of a Auditori 1899 of the Camp Nou specially prepared for the occasion. From there they lived all the details of the forward’s speech, who confirmed his departure from the culé cast with a deep sadness that was made clear by him uncontrollable crying that accompanied him throughout the event.

Antonela and the three children are the key support in each step that the footballer takes in his career. Now they too must face a drastic change in their lives. Thiago (8 years old), Mateo (5) and Ciro (3) are Catalan Y they will move for the first time since they came to the world. The family will have to change their place of residence and adapt to a new city (everything indicates that the destination will be Paris, where Leo will play for the PSG).

“A lot of things go through my head. To this day I do not fall into the reality of leaving this place and changing my life completely. I’ve been in the first team for 16 years and it was always the same for me. Now is a fresh start for me and my family. I am sure that we are going to adapt, even if it is a difficult change ”, highlighted the Rosario, who did not forget the impact that this enormous news has on his loved ones.

When Messi broke down permanently, It was Antonela who brought her a tissue up to the stage to dry her tears. Obviously mobilized, she was one of the first to stand up during the closed ovation that her husband received, which lasted almost two minutes without interruption. His children followed all the details of the conference, each one calm from their respective chairs.

“I arrived at a very young age, 13 years old, and after so many years I am leaving with a wife and my three Catalan-Argentine children. I promised them that we will return, but I am very grateful to all the people of the club, because they have very beautiful values, “said Leo.

The footballer was moved to tears (REUTERS / Albert Gea)

Also present at the press conference were the president of Barcelona, Joan Laporta, and other members of the club’s board of directors. In addition, a large part of the team of the culé cast participated: the Dutch coach Ronald Koeman and footballers Gerard Piqué, Sergi Busquets, Antoine Griezmann Y Frenkie De Jong, among others. Glories of the institution as Carles Puyol Y Xavi, who shared legendary Blaugranas outfits with Leo, attended the event.

With the departure of Barcelona already closed, now the attention will focus on knowing what will be the next destination of the captain of the Argentine team. PSG is the strongest option, although he himself assured that there is still nothing closed. The next few hours will be key to knowing how the career of the best footballer in the world will continue.

Visibly moved, Messi confirmed his departure from Barcelona: “I would have liked to say goodbye in another way”
Lionel Messi referred to his future: “The PSG thing is a possibility, but there is still nothing closed”
The emotion of Lionel Messi that shocked the world: an uncontrollable cry and an endless ovation