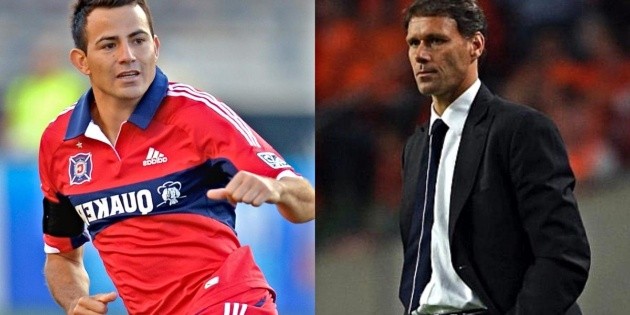 Marco Pappa he is one of the most talented footballers he has ever had Guatemala, his great level little by little opened the doors until the football of the MLS in the United States, where he could exploit his full potential. However, it was not expected that one of the most important Dutch players in the world would have an impact on his career. Yes, Marco van Basten Y Marco Pappa they would meet later, although things for the chapín would not turn out as expected.

The Guatemalan would sign for him MLS Chicago Fire on July 30, 2008 and during all the time he was with the team, he was able to play 100 of the 110 official meetings, he scored 36 goals and gave 21 assists. And today, he is the third highest scoring player in the club’s history. By having this performance, the chapín felt that he had to take another course, a new destination. For him, that new territory was in Spain.

What happened to Marco Pappa with Marco van Basten?

His contract with the Chicago Fire was about to end, and Marco Pappa at the time he had claimed to have the interest of various teams from the old continent. The Central American midfielder made it clear that he would like to play in Spanish soccer because of the qualities of the league. Immediately, different Spanish media began to divulge that Villareal was interested in getting Pappa’s services.

Finally, Marco Pappa ended up going to the Netherlands signing for SC Heerenveen on August 30, 2012. Perhaps postponing his trip to Spain for another time. But here a fundamental event would occur. The technical director who requested his signing at that time, was fired and the historical was hired in his place Marco van Basten, who did not see the Guatemalan as a priority in his team.

Goodbye to the European dream

Counterproductive situation for Marco Pappa and that somehow, not being taken into account by van Basten, the dream of being able to go to Spain taking advantage of the great level that he had at that time, seemed to move away more and more. Even the Spanish media criticized the Dutch coach’s decisions not to give Marco Pappa minutes. Due to this situation, the Guatemalan had to find a way out of the team and found it again in MLS with the Seattle Sounders. But he was never again able to resume that dream of establishing himself in European football or, as he would have liked, in Spanish football.