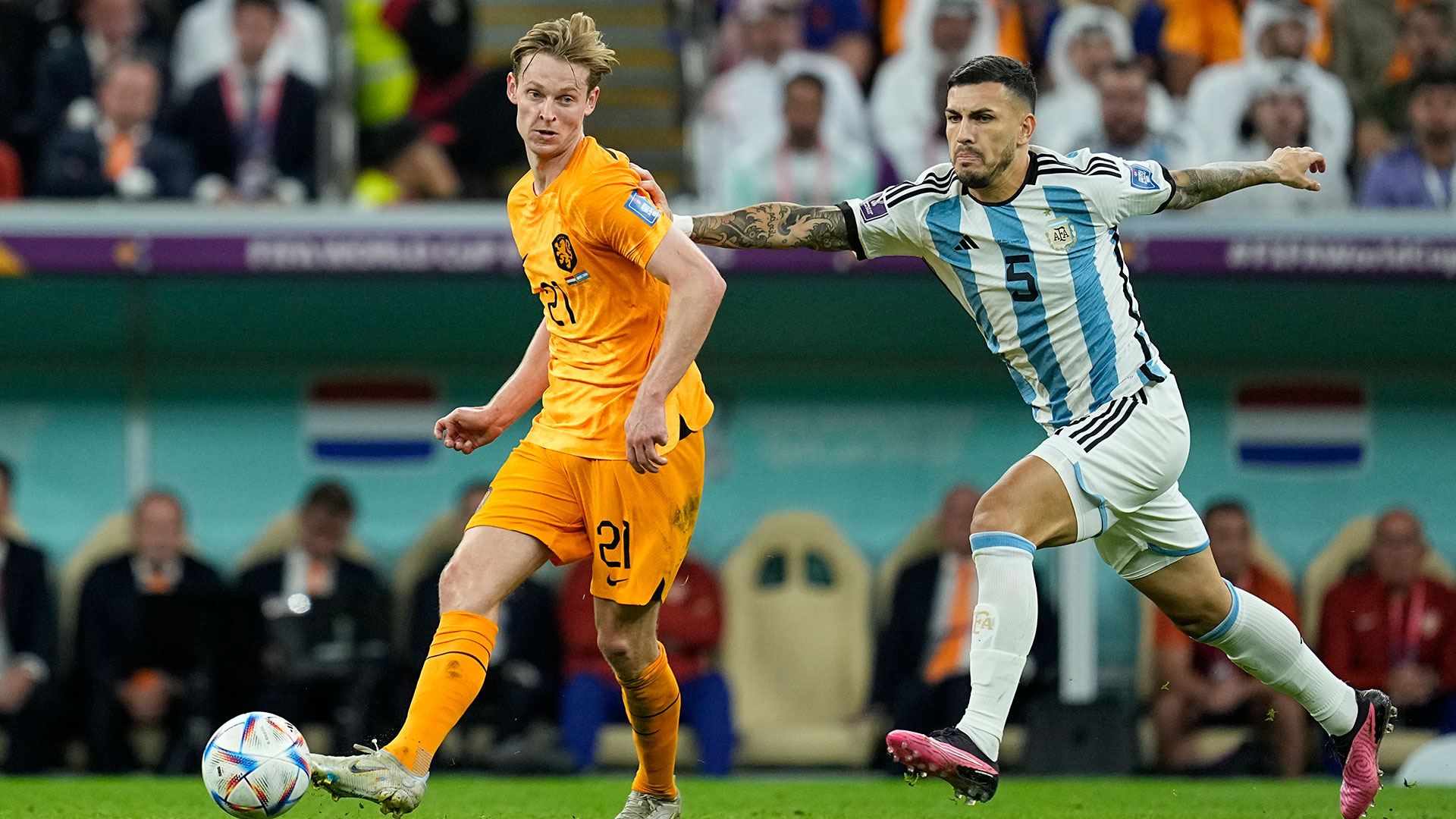 “They don’t like being on top of them,” acknowledged Leandro Paredes about the mark they exerted on the Dutch midfielder (Photo: AP Photo/Ebrahim Noroozi)

(Special envoy to Doha, Qatar) Rodrigo DePaul He was the first to demonstrate the strategy. Everytime that Frenkie de Jong he took the ball his brand was sticky, invasive. The indication to prevent traffic from flowing on that Dutch road was obvious. But one more fact always happened: a little push in the back every time the Barcelona midfielder broke away from possession. The scene was repeated almost throughout the game, regardless of who was their marker.

The training of the Argentine team: Di María’s special session and “the team with the bibs” that Scaloni thinks to face the Netherlands

“Was there some strategy that always pushed him?”he raised infobae De Paul himself in the mixed zone. “No, nothing…”he said while throwing a huge laugh and chose to speed up the step in the labyrinth of attention to the press towards the bus. Nevertheless, Leandro Paredes He did hint that there was some extra information in that event: “Surely we know that players like that, with so much talent, They don’t like being on top of them, being touched after the ball is releasedso it was a matter of annoying him a little”.

through the bowels of lusail Stadium also walked Nahuel Molina. She didn’t puff out her chest, didn’t raise her voice, or brag. That first goal with the Argentinian national team jersey in such an important stage of the World Cup did not change his habitual expression of respect with journalists, of analysis in a low voice. The right-back controlled a pass from Lionel Messi inside the area as if it were a custom to be in that offensive position. And in his genetics there is something of an offensive vocation: he was a striker in his beginnings and even came to be in the orbit of Barcelona in children.

Scaloni’s crossing with a journalist due to the leaks in the National Team: “I don’t know if we play for Argentina or for the Netherlands”

“Yes, I started as a forward in the lower ranks, then I went backwards…”, he acknowledged before this medium with a certain timidity. But his performance was highlighted to the point that the blaugrana had decided to give it a try and the Catalan newspaper Sports world He had anticipated in 2012 that this entity would test a 14-year-old “skilled striker”. However, Molina completely keeps his profile low and clarifies when we ask if something from that past appeared in the definition against Andries Noppert: “Today? Nope! I put puntín, like in the neighborhood…”.

“Scaloni asked me to play high, because we knew that we could have a chance playing high. Usually noodle He plays out there open, today it was my turn, but he only asked me for that (the DT). After I’m standing well back,” she added.

The path that the leader illuminates

The analysis of what is at stake for the Argentine team against the Netherlands for the quarterfinals of the Qatar 2022 World Cup, led by Lionel Messi

And, like all those who watched the game, he can’t explain how Lionel Messi saw it to filter the pass: “Honestly, I don’t know how he managed to see me. He was always an example for us, the Argentine boys, and today I have to play with him on the field and I enjoy it”.

Lionel Scaloni is in all the details (Photo: REUTERS/Carl Recine)

It’s three in the morning in the Lusail Stadium. The press area only has one active focus. Like a swarm Lionel MessiAs usual, he leaves last and attends to the batch of Argentine journalists who are waiting for him. His colleagues are waiting for him on the bus, but they know that the captain has respect for the work of those envoys who arrived in Doha. “We ended up suffering from the fart. With the 2-0, the game could have been finished in 90 minutes. They didn’t do anything, they just put in tall, big people and start hitting balls. They complicated us like that. The referee didn’t help much either. Unfairly we ended up going into overtime in a game that we had to finish at 90″, he analyzed with new darts directed at judge Antonio Mateu Lahoz and the rival DT.

Now there are five days left to face Croatia in the semifinals. Or four days and counting… And the one who appears from the opposite door to where the athletes leave is the coach, lionel scaloni. “Who’s left? Who is left? ”, Asks the DT between startled and obsessive to take care of the rest of his directed. Every minute of recovery from now on counts. “It’s three in the morning, it’s late, let’s go to sleep!” He asks a few reporters who were in that sector and turns around to go back to the bus. After a few seconds, the captain, without knowing that his coach had appeared in the sector, will follow in his footsteps and begin his well-deserved –and more than anything necessary after 120 minutes of pure action– rest.

The two gestures of Messi’s leader and the message in the ear of Dibu Martínez: the pearls of the penalties of Argentina’s victory against the Netherlands
Tula, the myth of the bass drum that celebrates its 13th World Cup: from the bad moment he lived in Qatar to why he continues playing
Two Argentine brothers managed to exchange the 31 jerseys of the World Cup teams with other fans in Qatar
A holiday in the mansion of the “sheikh influencer” who is a friend of Messi: “Leo’s family is my family”

The sticky strategy on De Jong, Molina’s hidden past and Scaloni’s request to the press: what was not seen from Argentina-Netherlands