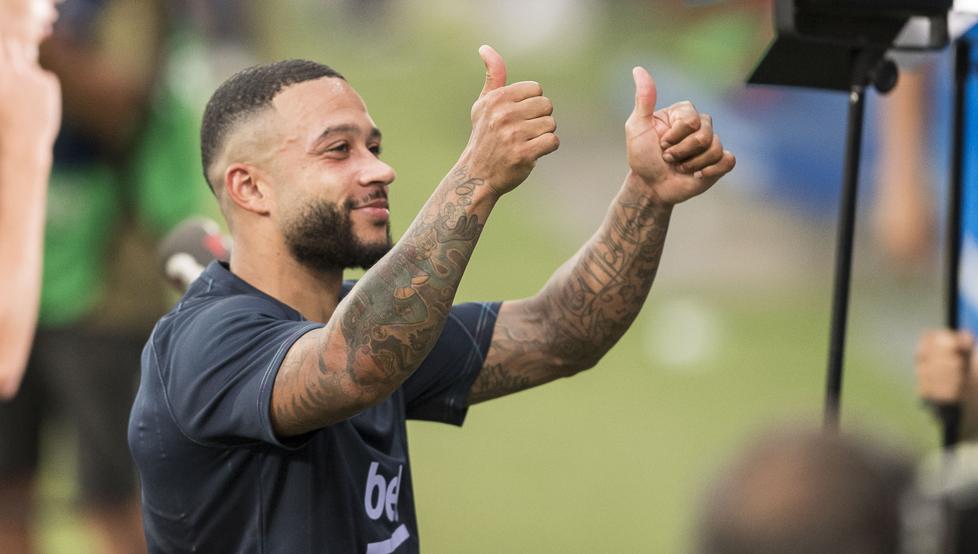 Memphis Depay, or better Memphis to dry, as the Dutch striker himself likes to be called, he made his debut as a Barça player, made his debut as a scorer and captured on the pitch of the Estadi Johan Cruyff what are your credentials. He came out wanting to show those qualities that impressed Koeman and to mark territory. He wants to make a career at Barça and win over the public, who began to show their support in his first game. Memphis began his journey at Barça as ‘nine’. In addition, he wore that number on his back. It does not necessarily mean that it’s going to be your number, but it is significant of the plans that Koeman has for the signing that he has demanded the most since his arrival on the Barcelona bench.

Koeman thinks of Memphis as ‘nine’. It is the position in which I played in the Netherlands team when Ronald was the coach. Of course, not a static ‘nine’, but combinative and versatile, capable of falling to bands or go down to get balls. Ronald sees Messi starting from the right. On the left, if he recovers, Ansu Fati. That, if Griezmann is not on the squad. If the Frenchman follows, he would move through that area, as he did in the final half hour of Barça-Girona. With the eventual entry of ‘Kun’ Agüero in the eleven, Memphis could pass to the left, which is the demarcation through which he moved in the recent European Championship.

But almost all roads They point out, on their arrival at Barça, to the demarcation of ‘nine’. Memphis himself, in his presentation, explained that it was his current coach at Barça who placed it at ‘nine’. Until then, he had always performed in the band. It seems clear, then, how Koeman considers that he can extract the best results from the virtues of Memphis.

He also debuted with the number ‘nine’ on the back, although it did not start as a starter. Rey Manaj came out with the ’19’. At Barça there is currently an owner of the number ‘nine’, which is none other than Martin Braithwaite. Danish not yet incorporated to work, as he reached the semi-final of the Eurocup with Denmark. He is scheduled to start training next week, as soon as he joins the last contingent of internationals, except Pedri, Mingueza and Èric Garcia, who are playing the Games, although Mingueza is injured.

Braithwaite, the ‘owner’ of that bib, is on the list of transferable Barça, despite the fact that he has already expressed his will to remain in the Barcelona squad. In fact, by your profile, Koeman would not ‘bother’ in the group, although it is not his main option. If it continues, we should see what happens to the number ‘nine’. The most reasonable thing would be to keep it. If martin leavesEverything points to the number ‘nine’ going to Memphis.

Anyway, and considering that ‘Kun’ Agüero will also be a novelty in the squad, it is something that will not be decided until everyone is there. Both Memphis and ‘Kun’ Agüero have worn the ’10’ in their previous teams, Olympique Lyonnais and City. In Barcelona They can already forget if Messi ends up signing a new contract and stays. Therefore, you have to look for an alternative and the ‘nine’ is an appealing number, which ‘Kun’ has also worn in the America’s Cup, while Memphis with the Netherlands continued with the ’10’, which would give the Argentine a small advantage.

Throughout his career, however, Memphis has led several numbers and the ‘nine’ has been very punctual. The ’17’ and the ’19’ are numbers that are free and that they have worn at some point. He has also played with the ‘7’, which for now belongs to Griezmann, with whom by the way he penetrated like a thousand wonders in his debut, or ’11’, by Dembélé.

In any case, What is clear It is the plan that Koeman has for Memphis: he will have a relevant role in his Barça. And preferably in the ‘nine’ position, in which the Barcelona coach has always visualized the forward. He also arrives in good shape having rested after the KO of the Netherlands in the European Championship.