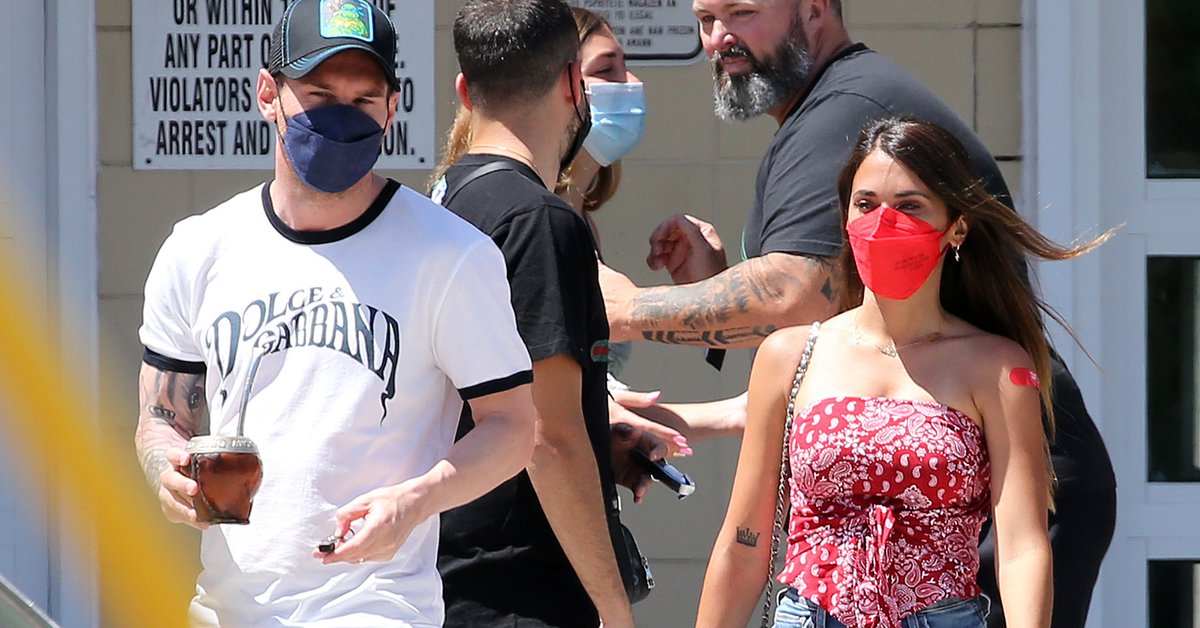 Lionel Messi and Antonela Roccuzzo, after having been at the Walgreens (Photo: Grosby)

After conquering the America Cup with the Argentine national team and while defining his future at Barcelona, Lionel messi enjoy a well-deserved vacation in Miami with your family. There, he rented a house where he spends the afternoons with his children and his wife, Antonela Roccuzzo, although they also take advantage of the days to walk the streets of the American city. Justly, This Tuesday the couple took the opportunity to go to a pharmacy where they apply the coronavirus vaccine.

A group of paparazzi was able to capture the images of the footballer and his partner in the chain’s facilities Walgreens where many people go daily to inoculate themselves against covid-19. As clarified by the agency Grosby, in the photographs The soccer player is seen leaving a room where the injections are given but there are no details on whether he was vaccinated. A similar situation occurred with Roccuzzo, who left the place with a red band on his left shoulder that logically aroused speculation.

Messi, who is still a free agent since his contract with Barcelona expired in June and has not yet defined his future although he has an agreement in principle with the Catalan entity, appeared at the scene wearing jean shorts, a light shirt, cap and chinstrap . But what most attracted attention is that he also carried a mate, although the thermos was left inside the vehicle, parked meters from the pharmacy.

Messi leaving the room where they apply the vaccine (Grosby)

Since February of this year, when the United States authorities decided distribute vaccines in large pharmacy and supermarket chains. Walgreens, along with CVS, was one of the first to have permission to administer doses to its customers, who must have an appointment but do not need to have a medical prescription.

Antonela Roccuzzo with the mate and the band on her arm (Photo: Grosby)

In the case of the Walgreens chain, which has more than 9 thousand pharmacies throughout the country, vaccination began on February 12 in 17 states and territories: Arizona, Chicago, Connecticut, Delaware, Illinois, Kentucky, Maryland, New Hampshire, New Mexico, New York, North Carolina, Puerto Rico, Virgin Islands, Vermont, Wisconsin, and West Virginia. Later it spread throughout the rest of the territory until reaching California, where Messi is on vacation.

Coronavirus infections in the United States have plummeted, sparking optimism that vaccination campaigns are curbing both severe cases of COVID-19 and the spread of the virus. About 59% of the adult population has already been inoculated and in California, where the Messi family is located, the percentage rises to 62.5% out of a population of 40 million inhabitants.

The footballer’s presence in Miami attracted the glances of locals and strangers since he set foot at the airport after getting off his private plane: That day a fan was waiting for him at the place to ask him for a signature which later became a tattoo. Beyond the commotion that was armed leaving a restaurant where he went to dinner with his family, Leo decided to seclude himself in the company of the most intimate in a luxurious oceanfront home in Key Biscayne, Miami-Dade County.

Leo, Antonela, Ciro, Thiago and Mateo traveled to Miami, but Celia and Jorge (the footballer’s parents) joined them, along with the footballer’s brothers and their families. A well deserved rest stage with a large entourage of those who were at all times of his career.

Antonela had a band on her left shoulder, so she was vaccinated against the coronavirus (Grosby)

Both Leo and Roccuzzo opened the door to their privacy during the last hours with different photos and videos that they uploaded to their respective official profiles of Instagram. The mystery about his whereabouts was short-lived, as fans quickly located where the mansion they chose to spend their days off was located. The property you rented it is oceanfront with a bay view from all rooms. A house equipped with the latest technology what’s wrong with it four floors with five bedrooms and five bathrooms, garage for several vehicles and a infinity pool. Precisely, they they uploaded a photo with Ciro, the youngest of their children.

Beyond the indoor activities, Messi and his family also made time to go out and visit various places, especially gastronomic establishments. In one of his first public appearances the footballer lived the siege of the fanatics on your visit to Cafe Ragazzi, an upscale Italian restaurant owned by the singer Ricardo Montaner. More relaxed it was his passage through Prima Pasta, an Italian cafe and restaurant where he went with his entire family and which is regularly chosen by different celebrities around the world. He had some spinach and ricotta agnolotti with pink sauce, but he also tried some bites of the milanesa that one of his brothers had ordered.

The scenes of fervor were repeated in Key Biscayne, the area where the family stayed.. There a crowd of children glued to a fence waited to at least see him pass. Just as it happened when leaving the restaurant, and as it also happened at the door of his in-laws’ house in Funes when he returned from Brazil with the title, la Pulga approached the fans to sign their jackets, personal items and to lend themselves to the flashes.

For now, the head of the Rosario is set on enjoying his vacation since some days he will have to fully immerse himself in his professional future. Messi is expected to return to Barcelona after his break to sign the renewal of his contract with the club blaugrana.