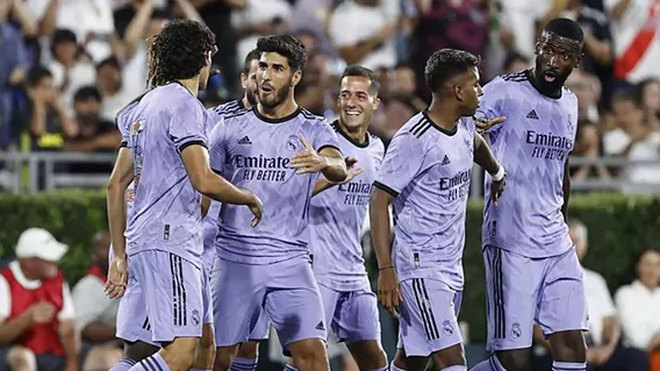 Carlo Ancelotti I came back from the United States excited about the team’s work. Beyond the results and the good feelings that the team transmitted against Juve, he stays with the work and the day-to-day atmosphere in the UCLA training camps. So his first doubt has been cleared: he does not see the team under the full belly syndrome.

The triumphs in League Y Champions they usually cause a relaxation in the teams that for now is not detected in Real Madrid, which has started the preseason with a voracious hunger. The old guard wants to rush his career to the maximum and in the youngsters there is a mixture of rebellion and of wanting to join the dynamics of the Madrid legends that causes the competitive level in training to be maximum. And Ancelotti benefits from all this and, therefore, the group.

The Italian coach has commented in his conversations with Florentino Perez and publicly that the 22/23 squad is more complete than last year’s. And it is that Rdiger Y Tchouamni They have given Madrid a more than important qualitative leap in two key demarcations such as defense and midfield. The technician is delighted with the balance that the squad has and the absence of a nine of guarantees to replace Benzema doesn’t take away your sleep. In this sense, Ancelotti shares the same idea as the club and, for now, prefers to find solutions at home rather than go to the market. Gabriel Jess was the only striker who convinced him and once he ruled out his signing for the passport, he prefers to bet on Hazard, Rodrygo or Marco Asensio in that demarcation.

Ancelotti knows that he is going to have to do a lot of wardrobe management in this second season. Because the veterans, despite maintaining their role as starters, are going to lose minutes and because it is likely that the youngsters who have been pushing hard are not going to play as much as they want. Ah, the left hand of Carletto, who has in mind to do more rotations than last season. Plan B is going to have much more weight than last year.

For now, the team is convinced that unity in the locker room is the best way to achieve the goals at the end of the year. The league and especially the Champions they were achieved with the fundamental contribution of the players who came on from the bench, penetrating the message that Carlo Ancelotti launched in the dugout. “The important thing is not the quantity of minutes, but the quality of the minutes”. Thus, players like Rodrygo or Camavinga were key despite coming off the bench in all the Champions League qualifiers.

In the United States, Ancelotti has already started therapy, holding private conversations with almost all the players on the squad. Always with a smile, but being honest with his players, he has explained to each one what he wants from them and how he intends to manage the season, with five titles at stake in the absence of FIFA publish the date of the Club World Cup, difficult to find in the calendar.

Real Madrid start preparing the Super Cup This Wednesday at 5:30 p.m. After the trip to the United States, Ancelotti gave his players three days off to recharge their batteries before focusing on the competition. The idea is, by reducing the workload of Los Angeles, to prepare for the duel against Eintracht during six training sessions. And after Finland, LaLiga, a competition that starts in Almera and that is likely to start with a good part of the second unit in the eleven. Because the Super Cup is for the same people from the Fourteenth due to sporting conviction and locker room health. Ancelotti It measures everything to the millimeter.

And this season is very special for the Italian coach. Ancelotti is still haunted by the downturn in his second season in white and wants to completely banish that 14/15 season in which he ended up dismissed. “Once I can be wrong, twice difficult,” he assured last season when asked if he was afraid that the team could fall because he did not rotate. Indeed, not only did he not drop the equipment, but he ended up on a high. For this course he intends that the Madrid stay on top, shattering the myth that your teams perform worse in the second year. His motivation, therefore, is at the top.

The hunger of Ancelotti and the new Madrid