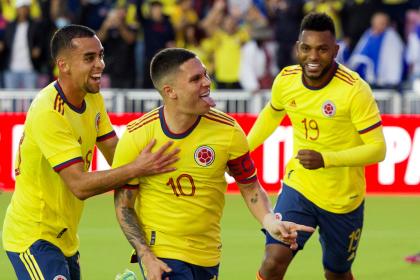 The Colombian National Team broke the spell of the lack of goals in the friendly against Honduras and that is the news of the day. It’s karma heading into the Qualifiers! There are a couple of details to adjust but the 2-1 against Honduras is a relief in the midst of so much pressure.

Rueda’s team had sparks of good football despite the little filming that the team had, with the majority of players from the local league, and knew how to solve when its panorama was complicated, which already gives meaning to the rehearsal prior to the Qualifiers, against Peru and Argentina.

Colombia had more and better resources and did not wait to make it felt. Two minutes later Quintero connected with Chará and Borja entered Candelo’s center with a very high header. And after 10 minutes came the first celebration: Quintero proposed the deep pass to Preciado and then accompanied him to appear in the middle and open the left foot in the definition, simply unattainable.

Once again, at 15, the creative tried again on the free kick but the goalkeeper guessed him and then he tried to team up with Borja, who hurried in the definition… as in the Qualifiers.

The first half went in promising associations between Chará and Quintero, between Preciado and Hinestroza, between Vega and Giraldo, advancing the lines to pressure the Hondurans, but there was a mole… well, two: Miguel Borja was still anxious and making bad decisions facing the goal and Quintero left after 42 minutes, accusing physical discomfort, leaving his place to Yaser Asprilla.

For the complement Colorado appeared instead of Giraldo and it was time to see the youngster from England’s Watford in action, generating a free kick in the 48th minute. But the blinking in defense, the only one in the entire game, was expensive for Colombia: Candelo went to close, struggled with Rodríguez and ended up giving up a penalty that Arriaga changed for a goal in the 52nd minute. Game 1-1 and the advantage was no longer such.

But then, the endemic evil of Colombia: possession without depth, little spark in Honduran properties, few unchecks to find scoring paths and the absence of Quintero or some connector was suffered. Until again Chará, one of the most restless in the field, opened the lock: an entrance to the area was invented, he put in the center and the one who appeared was the newcomer Colorado to put in the hoot and score 2-1 at 66 Data to Rueda’s notebook: midfielders who step on the area solve closed matches.

Asprilla was delighted at 72 and they asked for a penalty that they did not buy and Colombia continued to refresh the payroll with the entry of Román, Angulo, Mosquera and Llinás to close. Preciado had one more on the closing but the goalkeeper denied him the goal, Vega was encouraged at 84 in another good attempt from outside and Colorado missed the double at 87, when he aimed badly on the rebound of Angulo’s play.

The rehearsal was favorable: Colombia broke the spell of the goal and scored twice, men like Chará, Asprilla, Preciado, Vega and Gómez presented credentials for a future call, there were some failures in defense that were foreseeable considering the little filming of the summoned and in the end the rehearsal, against a rocky rival of those that abound in Qualifiers, left important conclusions. It’s always better when you win, but this time, really, the result was secondary. There are options in the local league and that, at this point and with the pressure that exists, is quite a revelation.