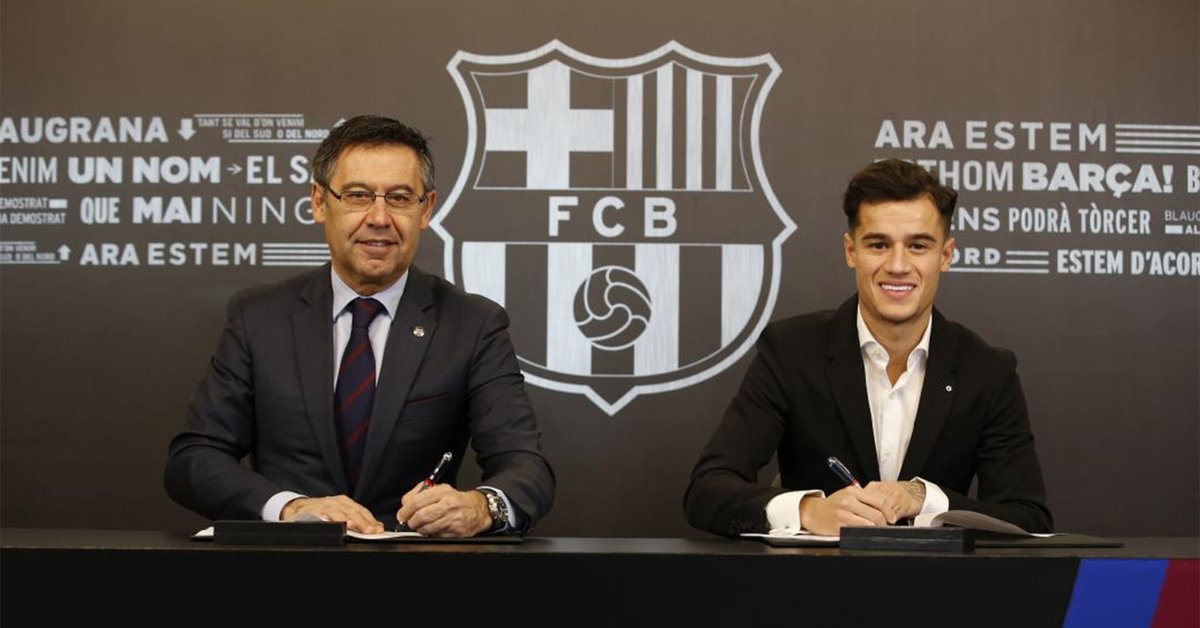 Bartomeu in the presentation of Coutinho, one of the players who cost Barcelona the most money

The Barcelona Soccer Club is one of the three entities with the most deficits in European football with a spending of 1,112.35 million euros and has a 352.35 red from the 2015/16 season, when he managed to complete all the possible titles in the squad that had Lionel Messi, Xavi Hernández and Andrés Iniesta.

In the Press conference in which he explained the reasons why Barcelona could not reach an agreement to rehire Messi (who was released on June 30), the president of the Catalan club, Joan Laporta, indicated that the expected losses “They were of the order of 200 million euros but finally they will be 487” and that “it is evident that the football industry recommends that wages are at a maximum of 65 percent of earnings. In this case, there is a lot to work on, to reduce. The problem is not only the salary, but the amortizations. I know they made investments of great magnitude and that is a drag”.

Those times when Barcelona showed their chest for the players that emerged from their quarry, such as when Messi, Xavi and Iniesta shared the shortlist for the FIFA Ballon d’Or in 2010, they are already behind and getting the hiring or sales right or not became essential.

“How much has Barcelona spent in the last five years?”, the Portuguese Cristiano Ronaldo was asked sarcastically in one of the many awards he received, while he recalled that the blaugranas “They have not won a Champions League since 2015 and Real Madrid won four since 2014.”

In fact, Laporta blames the club’s current crisis on the management of his predecessor, Josep Maria Bartomeu -To whom Messi sent in August 2020 the famous burofax by which he communicated that he was leaving Barcelona when he considered himself free-, who with collaborators such as former goalkeeper Andoni Zubizarreta first, and then Robert Fernández, Albert Soler, Jordi Mestre, Pep Segura , and finally the former French side Eric Abidal and Ramón Planes failed to translate that spending into European hits since 2016. Beyond the fact that the balance of these last six years consists of three Leagues, four King’s Cups, two Spanish Super Cups, a European Super Cup and a Club World Cup, although in the last two seasons, the harvest was meager with just one Copa del Rey.

According to the CIES research center, which belongs to FIFA, the Barcelona was one of the three clubs with the most deficit balance in Europe in the last five years together with Manchester City and Manchester United in a study carried out in 2021, taking into account expenses and income in hiring footballers, all with more than 400 million euros in red.

For CIES, Barcelona had in those years a balance in the red of 471 million of net spending, by investing 1,171 million and receiving 700, being also the one that more has spent in that period among the five major European leagues ahead of Manchester City and Juventus (999 million).

For different reasons, many of the players hired by Barcelona in the last six years did not work. The Turk Burn turan, signed by 35 million euros At Atlético Madrid, he generated great expectations but ended up going on loan to his league.

Arda Turán had a slow time in Barcelona (Photo: AFP)

Another similar case is that of the Portuguese André Gomes, for which Barcelona paid 35 million to Valencia, with a surreal clause such as establishing a bonus in the event that he won the Ballon d’Or, although he ended up at a good level at Everton, where two other players hired by the Catalans also stand out, the French Lucas Digne (who could never take the left-back position from Jordi Alba) and the Colombian Yerry Mina, although for this, Barcelona could, at least, take advantage of the pull of its good World Cup by scoring three goals in Russia 2018.

By the brazilian Paulinho, Barcelona paid 40 million Euros to Guangzhou Evergrande of China, to be loaned again a year later to the same team, although the passing of the steering wheel through the Camp Nou was acceptable.

On the other hand, they did not result in the return of a player from the house as Gerard Deulofeu, for which you paid 12 million euros to Everton although it ended up selling it for 13 to Watford, while Marlon santos He only played three games and ended up at Sassuolo.

Perhaps the most resounding operations of recent times have been those of the French Ousmane Dembélé and the brazilian Philippe Coutinho, with which Barcelona tried to quickly cover the exit of Neymar, when you received the 222 million a buyout clause of the Brazilian and spent on them 270 million, but neither of them achieved continuity. Dembélé totaled 527 days in the infirmary, and Cou He missed almost the entirety of last season due to injury when he previously left on loan to Bayern Munich, with whom he participated in the resounding 8-2 win that Barcelona suffered for the 2020 Champions League.

For the 2019/20 season, the Frenchman was hired Antoine Griezmann, for which Barcelona prided itself on paying 120 million euros because he waited for his clause to drop from the initial 200, and although he remains in the squad, he never finished adapting, while the following year the Bosnian arrived Miralem Pjanic, as part of an operation that included the departure of the Brazilian Arthur to Juventus, but the steering wheel was hardly taken into account and an outlet is being sought in this market.

Griezmann and Dembelé, two of the most expensive purchases in the history of Barcelona (Photo: Reuters)

The last of the cases is that of Luis Suarez, That marched for a very low value at the start of the 2020/21 season by not being taken into account by the Dutch coach Ronald Koeman and ended up being champion of the Spanish League and fundamental with his goals.

According to the site TransfermarktThese are the ups and downs of Barcelona since the 20115/16 season, with the titles won each season:

“I’m trying to assimilate all this”: the first farewell messages for Lionel Messi and Antonela Roccuzzo after meeting their departure from Barcelona
Gerard Piqué fired Lionel Messi from Barcelona with an emotional letter: “I know that one day you are going to come back, things remain pending”