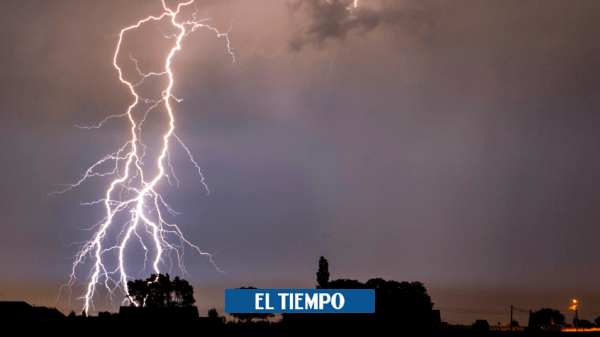 Although the science tends to give rational explanations to natural phenomena that occur, there are such facts unpredictable and surprising that sometimes generate doubts in society.

This was the case with Bena tshadi, a team from the Republic of Congo whose players were suddenly killed by lightning.

According to the Argentine newspaper ‘La Nación’, the strange event occurred in 1998, when the African country was in a civil war.

(Can read: Colombian girls will go to NASA’s Space Center).

Shootings, clashes, ethnic massacres and political chaos. The only thing that provided a different atmosphere to what was seen on the streets was soccer. However, that was about to change.

In October 1998, in the Kasai region, a match was held between Bena tshadi (local) and Basanga (away), two teams from the Congolese first division.

In 1998, there was a soccer match in the Democratic Republic of Congo between Bena Tshadi and Basangana teams. The Score was 1-1 when suddenly lightning struck the pitch during the match and killed all eleven Bena Tshadi players while the athletes from Basanga came out unscathed. pic.twitter.com/0tmaQnudZn

The stands were packed, the fans were expectant and the sky overcast, announcing a next storm. During the first half, when the game was tied at one goal and a torrential rain was falling, lightning struck the playing field.

No one survived from the home team, while the visiting team came out unharmed. The lightning also injured some thirty people who were witnessing the game.

(We recommend: Twenty years have passed since Colombia’s only victory in the Copa América).

“The lightning struck 11 young players between the ages of 20 and 35 who were playing in a soccer match. Basanga athletes curiously came out unscathed from the catastrophe “wrote the local media ‘L´Ávenir de Kinshasa’.

The great contrast of ‘luck’ between Bena Tshadi and Basanga raised all kinds of doubts. The team visitor was accused of witchcraft by the locals, who were culturally deeply rooted in superstitions and supernatural practices by sorcerers and healers.

In 1998, not Congo, Bena Tshadi, donated the house, and Basanga faced us in a flooded field pela chuva. A goal for each side when, suddenly, a raio hits the players and kills 11 of Bena Tshadi. pic.twitter.com/M9SCXPnQZa

To this is added that in the same month another lightning struck in a soccer match in South Africa, between the Moroka Swallows and the Cosmos. The incident, although it caused the suspension of the match, left no fatalities, but it did leave some players with cardiac arrhythmias.

On the other hand, the accusations of witchcraft continued for several weeks, while both women were put ‘on the warpath’.

(You may be interested in: The mistake of the year? The unusual goal that Argentinos Juniors missed).

Several soccer leaders began to tell that some teams they had sorcerers within the campus, so they asked for the prohibition of witchcraft in football. There were thousands of complaints black magic, extraordinary powers, evocation of spirits and more supposed supernatural practices.

But, finally, the country’s soccer federation issued a statement stating that the players who died they had aluminum caps in their wires and this facilitated the conductivity of the discharge in their bodies. Rivals who suffered no consequences wore plastic earplugs.

Many argued that the official clarification it was an excuse to hide witchcraft practices in African football.

The lightning continued to fall for a few more years until certain measures appeared to prevent this incident from happening again: active lightning rod on the courts and avoid wires with metal plugs.

In the end, each person chose whether to believe the scientific explanation or to continue to claim that the peculiar case was the product of witchcraft.