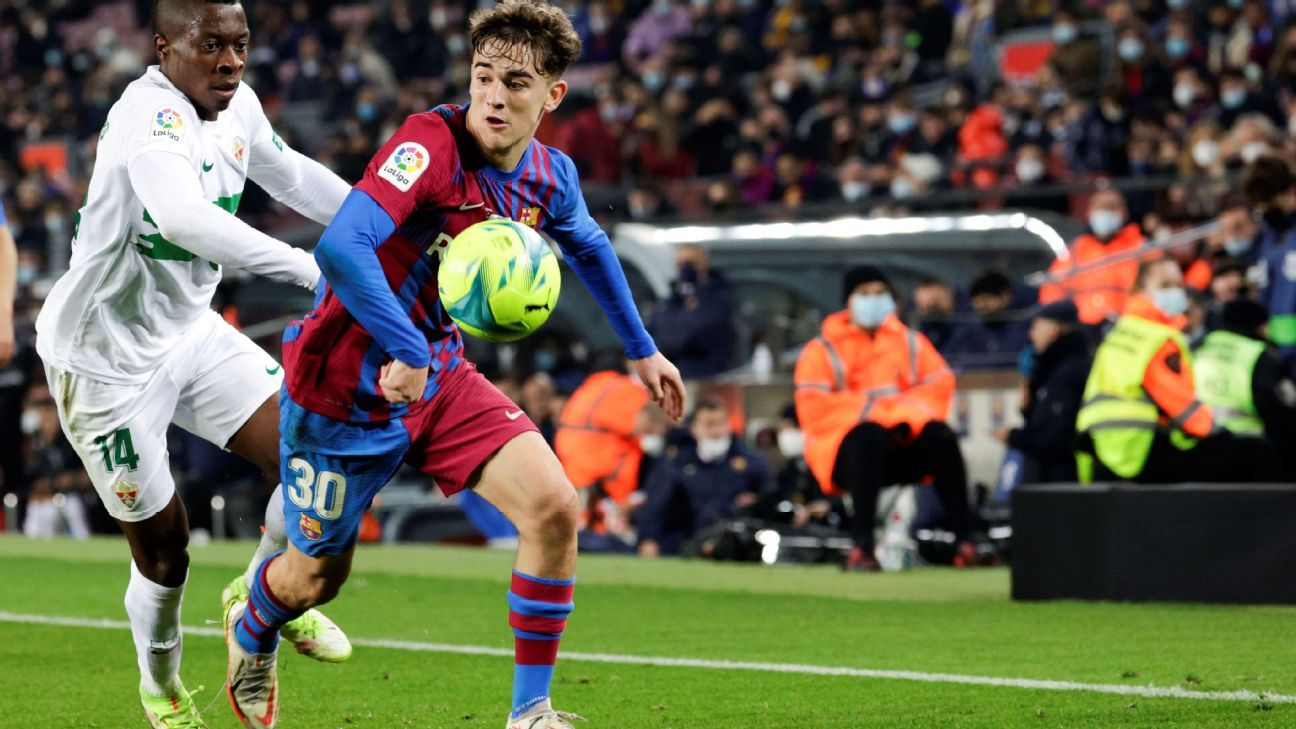 BARCELONA– LaLiga, which is drawn with the color of Real Madrid, prominent leader and favorite to win the title, begins 2022 that should become the year of the consecration of the new batch of young footballers called to become dominant protagonists of a championship in which the departure of Leo Messi from Barcelona meant the end of an era.

Young footballers who accompany the emergence of Pedri in the Barça club in 2021 who will not forget the Canarian player and who also had an outstanding protagonist in Vinicius. As were Yéremi Pino and also Chukwueze or Alexander Isak. As expected of Joao Félix or personalized before Ansu Fati …

These are the footballers called to explode in this 2022 that begins:

A midfielder of exceptional technical quality and outstanding physical ability, just a year ago he played in the youth team, promoted from the cadet, and made his debut in the Barça first team under Ronald Koeman at the start of the season, against Getafe in August, to become without pause one of the indisputable pieces of the team …

And even surprisingly claimed by Luis Enrique for the Spanish team. Gavi has taken on the role that Pedri played a year before in the last third of 2021 and goes to 2022 as one of the indisputable players in the rebirth of Barça, a role in which Nico must accompany him to become the transcendental player that he already is. proving to be … And that motivates urgency at the Camp Nou to tie its renewal with a salary according to its performance.

Today, his contract ends in 2023 and his termination clause is 50 million euros.

Catapulted onto the stage with just 16 years at Rennes, Real Madrid opted for him in the summer, paying 30 million euros and seeing him as a first-rate successor for Casemiro, who has already begun to show that he is in a position to deliver.

Very versatile midfielder, with excellent physical display, good positioning and remarkable handling of the ball, he has shown signs of being able to adapt to any task in the center of the field and the year that begins should consummate both his progression in Real Madrid and in the French national team. where he is called to be one of the leaders of the immediate future.

Winger who is now in his third season as a player for the San Sebastian first team, has stood out for his verticality and daring, becoming one of the hopes of this new Real Sociedad that aims to establish itself among the best teams in the League.

Despite being a player with a clear offensive vocation with a great capacity for association, overflow and a good shot, his defensive efforts in recovery work make him a transcendent footballer in Anoeta, where it is trusted that this 2022 will finish exploding to its full extent. .

Under contract until June 2027 and with a termination clause of 60 million euros, the directors of Real Sociedad are aware of the difficulty of keeping the player at the club in the medium term.

Another midfielder with refined technique, very good vision of the game and enormous capacity for work in a Betis where he has won the position as something more than the squire of Fekir, Canales and Guarded.

In his second year under the command of Manuel Pellegrini, his greatest supporter, he has 16 games, ten of them as a starter, and has the absolute confidence of the Chilean coach, who has proclaimed that Rodri “is going to be a great figure in the future of the Betis “.

Arrived at the Verdiblanco club as a youth and after having played in the grassroots football of Atlético, Espanyol, Barça and Deportivo, Rodri maintains a contract until 2024, with a clause of 24 million euros that Betis has been working to increase for months, knowing the interest that the player has woken up in various clubs.

Canterano del Valencia, who arrived at the age of 16 from Arsenal, Musah, born in New York, is fulfilling the forecasts in Mestalla, becoming a regular in Bordalás’s plans due to his work spirit, not starting but always taken into account in offensive facet, where he stands out both for his physical power and for his ability to resolve.

Renewed a year ago, he maintains a contract until June 2026 with a termination clause of 100 million euros that show the club’s blind confidence in his potential, having already played eleven games with the United States senior team.

The five ‘wonder children’ who will dominate LaLiga in 2022