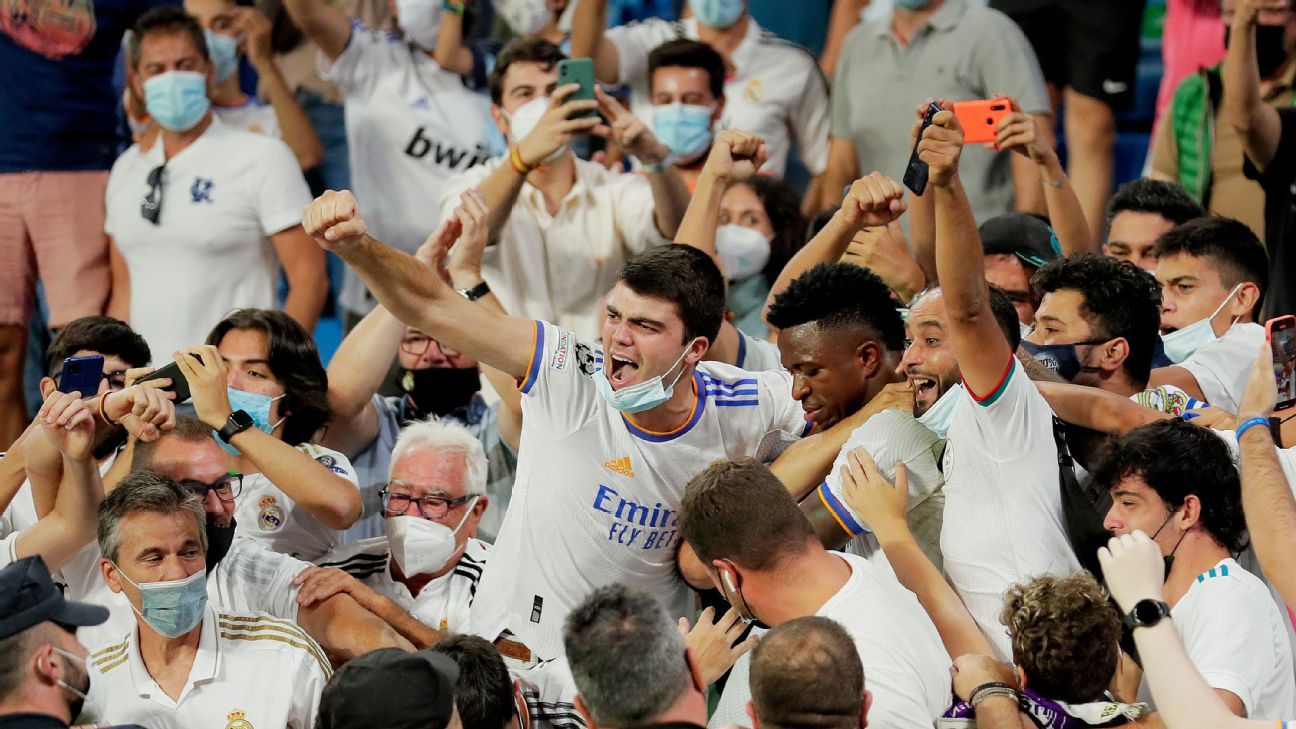 MADRID – Gabriel had not been to the Santiago Bernabéu for two years. With the help of his friend Íñigo, who is a Real Madrid member, he got a ticket and was able to go, 560 days later, to see his soul team: “I am not a paid member, but I am a Madridista, which is an option that gives the club to support the institution. I couldn’t believe that, so long later, I was going to be able to go back to the stadium, ”Gabriel told ESPN.

However, no one would have imagined that, before the end of the game, he would be expelled by the National Police and fined because Vinicius would jump the fence and celebrate his goal with him.

“It was the best day of my life. I would repeat it a thousand times ”, declared Gabriel between smiles to ESPN.

The game started and, after the first goal of Karim BenzemaGabriel looked for one of the broadcast cameras to show his friend Íñigo’s shirt, who was wearing the Frenchman’s number. The closeness to the grass was vital and he managed to get on TV: “Some friends noticed and wrote to me, but I barely went out for a second.”

Everything turned upside down when, at minute 54, Vinicius Junior he scores 3-2 against Celta Vigo and runs to the stands to jump the fence and celebrate his goal with the fans. The recklessness of the young Madridista made Gabriel and his friend not even think about it.

“We were literally sitting in the second row. After two years without going to the stadium, Vinicius scores the goal of the comeback, jumps into the stands and stays two meters from you … I decided to go for it. My friend and I we looked at each other and ran towards him. They all went crazy filming it. I was wondering if we would appear on camera, “Gabriel told ESPN.

From then on, Gabriel’s phone did not stop ringing or receiving notifications in the form of a text message. His celebration with Vinicius had been on all broadcasts globally.

“I’m in shock,” Gabriel said. “I haven’t counted them, but I must have had at least 250 messages on my phone. People I haven’t seen since elementary school! Every two seconds I receive notifications on Twitter, “says two days later the most viral protagonist of Vinicius’s goal.

However, despite seeing his photo on the cover of all the Spanish newspapers, his adventure did not end there. The National Police appeared on the scene to address a script twist that not even the best of Hollywood movies.

“I don’t know if it was the euphoria, but my mask had fallen off and I didn’t realize it,” he said. “I was only thinking of Vinicius, the goal, the comeback and the moment”, describes a Gabriel who saved the best for last.

“Vinicius returned to the field and I sat down, still celebrating. I turn around and hear:“ White pants and dark shoes? ”. I look myself up and down and I think they are referring to me. we have. ”There were four policemen with their walkie-talkies. They grabbed me and said they were going to kick me out! Everyone around me said ‘you haven’t done anything, poor boy.’ They took me out of the stadium, asked me for identification and entry , and they gave me a fine. They said they didn’t know how much it was, but it would come by mail. I hope not! “

Gabriel, from his expulsion, thought that everything would end. But the final chapter would be about to be written since his celebration went viral and the reaction of the police as well. To such an extent that several Twitter, TikTok and YouTube accounts are willing to help him with the payment of the fine: “I’m in shock, this is incredible,” he told ESPN before saying goodbye.