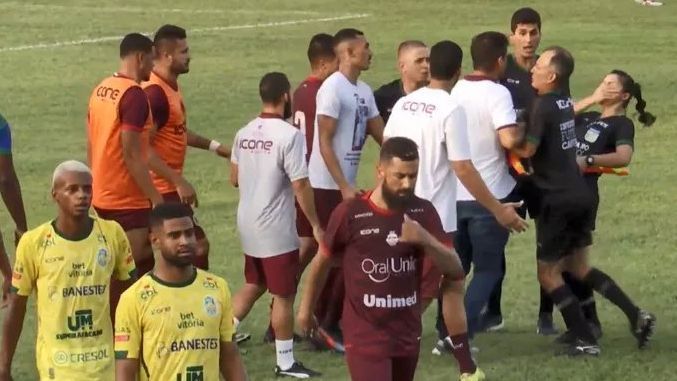 The club Railway Sports The Brazilian announced this Sunday the termination of his coach’s contract, Raphael Sorianofor headbutting a lineswoman in a game for the regional championship of the state of Holy Spirit.

The entity reported in a statement that, “before what happened, the coach was released from the club” and that “he repudiates any and all types of violence, whether physical, verbal, moral or emotional, mainly against women.”

“We sympathize with the assistant referee Marciely Netto and we make ourselves available for whatever is necessary,” added the club in the note.

The attack, whose image has had a wide impact on social networks, occurred this Sunday afternoon in a match for the quarterfinals of the so-called Capixaba Championship in the small town of New Venice and in which the Railway Sports was eliminated after falling 3-1 against the club New Venicewho advanced to the semifinals.

Dissatisfied with the referee’s decision to blow the whistle at the end of the first half when his team was about to take a corner kick, Soriano invaded the field along with several of his players to demand explanations from the referee. Arthur Gomes Rabelo.

After the discussion with the referee and when he was about to leave the court, the coach headbutted the judge in the face, which earned him immediate expulsion.

Soriano denied that he had committed the assault; he attributed the confusion to an accident and said that the judge wanted to take advantage of the situation because of her status as a woman.

The Espírito Santo State Football Federation reported in a statement that it opened an investigation and that it will rigorously apply the due sanctions.

The Federation said in its note that it “repudiates any act of violence” and that it will give its full support to the judge.