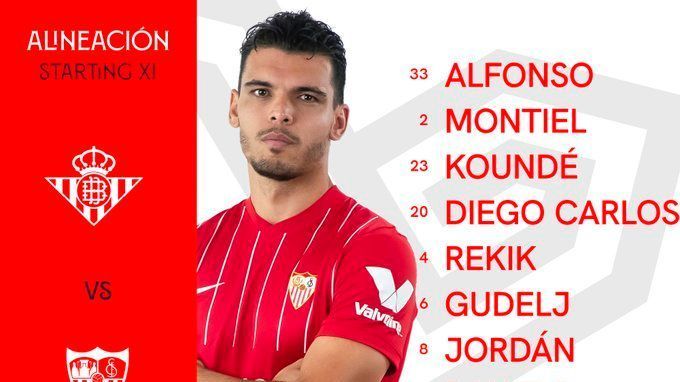 A few days after his signing was announced, Jesús Corona was included in the list of players eligible for the Copa del Rey duel

Jesús Corona received his first call-up with Sevilla, after Julen Lopetegui considered him for this Saturday’s Seville derby in the round of 16 of the Copa del Rey against Real Betis, a duel that ‘Tecatito’ began on the substitutes’ bench .

The ‘Tecatito’ barely arrived in Seville last Thursday and two days later he was already considered for the Copa del Rey duel. However, the Mexican, who will wear the number ‘9’, was initially among the substitutes.

Corona arrived at Sevilla from Porto, a team with which he lost prominence in the current season, as he barely played 740 minutes in the 18 games he participated in, in which he contributed with an assist.

The Mexican defended the colors of Porto since 2015. With the Blue Dragons, ‘Tecatito’ played 287 games, in which he recorded 31 annotations and 69 assists, in the 18,881 minutes he played.

It will be the second time that “Tecatito” is directed by Julen Lopetegui, since previously, in 2015, the Spaniard had the Mexican while he was Porto’s technical director.

In total, Lopetegui directed ‘Tecatito’ in 17 games, in which the Mexican scored six goals, in addition to adding an assist in the 1,081 minutes that the Monterrey youth squad was on the pitch.

In LaLiga, Sevilla is in second position with 44 points, five behind Real Madrid, which has taken over the lead in the general table. However, the meringues have one more game than the Nervion team.

After the duel in the round of 16 of the Copa del Rey against Real Betis, Sevilla will play next Wednesday against Valencia, in a match corresponding to LaLiga Matchday 21.

‘Tecatito’ will jump to the substitute bench in the Seville derby