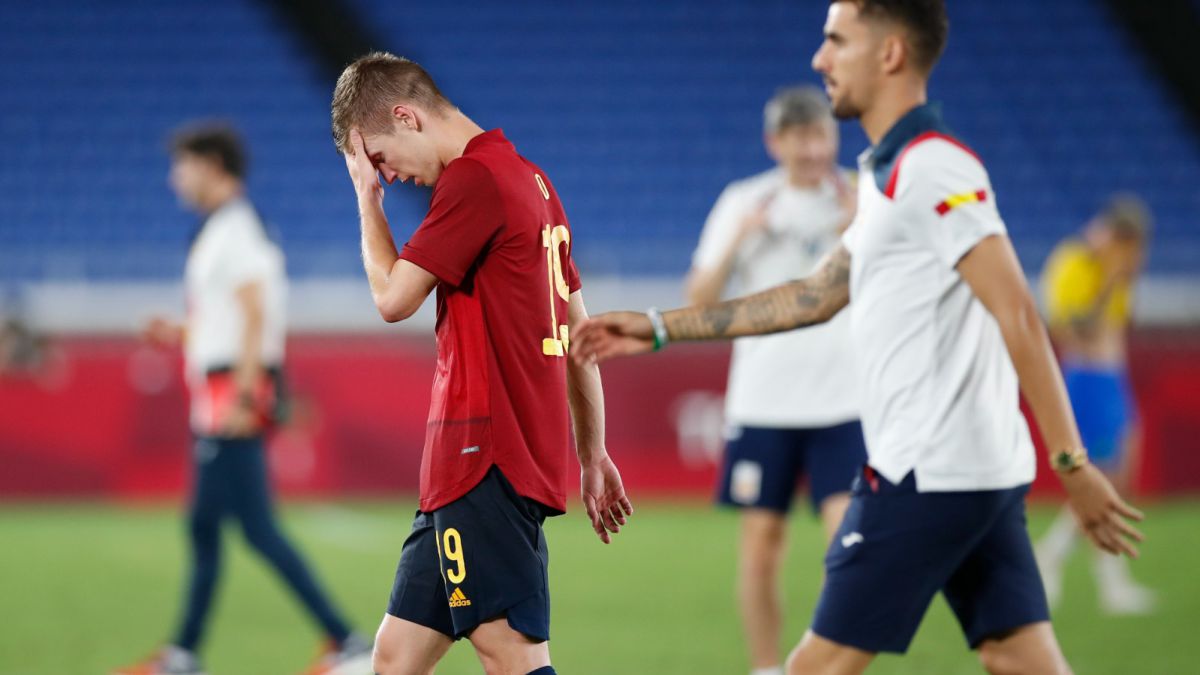 Brazil is golden again. Canarinha defended their Olympic throne in a match that could fall for either side but was won by the Brazilians by trade in the second half of extra time. Spain had exhausted its dose of fortune in the quarterfinals and semifinals and this time it had to taste the sour taste of defeat in the final stretch. A goal from Malcom in minute 108 ‘sentenced De la Fuente’s men, who must leave Japan with their heads held high for the silver and, above all, for the path that has brought them here. NNo great team reached glory without stumbling several times before, this generation must take this as one more incentive to settle scores with football in the next World Cups and Euro Cups.

The game started like almost all finals: the first ten minutes are scored and no one wants to be the one to make the first mistake. The duel also resembled a 10,000-meter race, in which you can pay dearly to empty the gas tank in the first laps. At the moment of the initial whistle there was 92% humidity that invited not to burn energy before time.

Little by little, Spain took possession although with the slow pace that has accompanied it throughout the championship, typical of this stage of the course, more preseason than competition. It has not been something exclusive to De la Fuente’s, because in general terms the games in Japan have had little rhythm.

In the 16 ‘, Asensio brought out his left foot with a measured cross that left Oyarzabal alone before the goalkeeper. The realist wanted to give the goal to Olmo, but Diego Carlos (who was about to score in his own goal) aborted a very clear chance. That play unleashed hostilities and the Brazilians tipped the field towards Unai Simón’s goal.

Clear opportunities did not come, but the feeling that Canarinha was playing in a higher gear than La Roja did. When that happens, you expose yourself to accidents like the one that happened in the 36th minute: a bad start by Unai Simón ended in a more than debatable penalty indicated by the VAR. The football was fair and Richarlison sent her sky high. The two teams signed a truce before the break, Brazil with the desolation for the wrong maximum penalty and the Spaniards still with the scare in the body. Thus, in the discount and in an action without any apparent danger, a chain failure of the defense arrived, the line that had sustained the Selection in this tournament. First Cucurella erred, who was entrusted to Alves and then Pau Torres made a rude mistake, improper for a center-back of his category, to leave Matheus Cunha alone against Unai Simón. The Brazilian, with everything to pleasure, did not forgive.

Luis de la Fuente, angered by what he saw in the first 45 minutes, took out the shaker once more: from the booth the team returned with Bryan and Soler instead of Merino and Asensio. The changes were plugged in and in one of the first actions of the second act, a center from Bryan ended in a shot from Oyarzabal that Soler, involuntarily, he served when he promised to be a goal. Spain finally woken up because Brazil made him understand that the game could end: Richarlison had a resounding chance in the 51st minute that between Unai Simón (paradón) and the crossbar they managed not to end in a goal.

Spain grew at the pace set by Carlos Soler, who entered toned. From the Valencian player’s boots the tie was born, in a good cross from the right that Oyarzabal caught before it touched the ground. In the final minutes, the crossbar twice separated Spain from the victory, first in a center by Óscar Gil who was poisoned and later in a left-footed shot by Bryan Gil from the edge. There is no way: Spain only knows how to finish in extra time this summer. Six out of six between Games and Euro.

In overtime, with most footballers urgently calling for an oxygen cylinder, a bad deed by Jesús Vallejo ended Spain’s hope. The Aragonese was very soft in a counterattack, Malcom stole his portfolio with excessive ease and the former Barcelona defined well against Unai Simón. Cruel outcome for the captain of this Selection …

This is the end of the road. The curtain is lowered on a function that began in 2015, with a group of beardless people wanting to take over the world. The plot has had everything and ends in a bitter way: losing to Brazil in a final of the Games. Different times will come, better or worse, but different. It has been an exciting and successful journey. Thanks a lot. Enjoy the Olympic silver, because sooner than you think you will have to taste the gold …