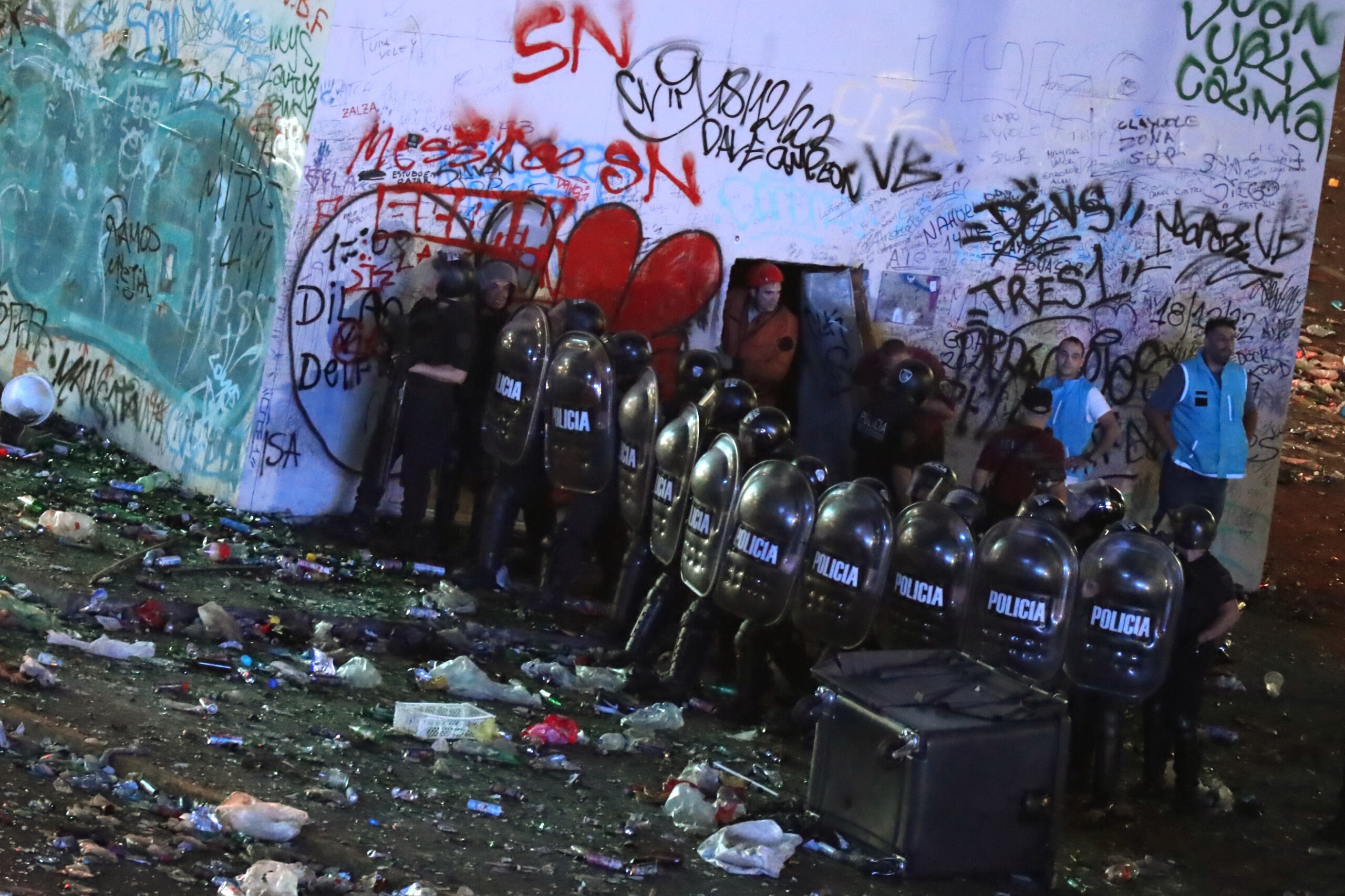 On the end of the celebrations for obtaining the World Cup, hundreds of fans staged serious incidents on Tuesday night when they confronted the police officers who were trying to evacuate the people who were still in the area of ​​the Obelisk and even the moment there is a total of 14 detainees Y 21 troops wounded.

When most of the people had already left the place, some attackers began to throw stones and bottles against the few uniformed men who were at the entrance to the historic monument of the City of Buenos Aires, who, in turn, responded by shooting rubber bullets.

According to what was reported, the riots began when the Infantry and Firefighters tried to lower two men who had entered the Obelisk, after its door was again forced by protesters, and they remained on top. Personnel from the Special Rescue Group (GER) and agents of the City Police were attacked by a minority group of demonstrators with stones and blows with bottles. There they detained four people inside the monument.

Then the eviction of the vicinity of the Obelisk and the downtown area of ​​the City of Buenos Aires was also ordered, where 10 more people were apprehended.

It may interest you: Popular fervor and improvisation: the reunion of the fans with the world champions that ended in helicopters over Buenos Aires

In fact, as stated by infobae sources from the City Police, so far there had been a total of 14 detained aggressors and 21 injured, among members of that same security force and the Fire Department.

Furthermore, the attackers several objects were set on fire that they left in full Avenue July 9 and on the Metrobús lane, while the Police formed a cordon to prevent the columns from advancing towards other parts of the City, while some trucks and a hydrant car of the force arrived at the scene of the events to provide support.

Around 9:20 p.m., the situation was already under control. and the avenue had been completely freed, although it was still full of garbage that was generated throughout the day.

The same police sources specified that in the morning several people managed to completely tear down the bars that surrounded the Obelisk, which had already suffered damage in the festivities last Sunday, shortly after the Argentine team defeated the French team and was consecrated in Qatar. .


The fans concentrated on the entire 9 de Julio to await the arrival of the group with the world champion players, which was originally going to go through that place to greet them, but which finally had to change its route due to the crowd that was there.

It may interest you: More than 4 million people took to the streets to celebrate the title with the National Team: the Obelisk, the Plaza de Mayo and the AU collapsed May 25

“It was already impossible to continue (with the operation) due to the number of people and because the boys (of the National Team) were put at an undesirable risk, and the same people as well. I believe that these images are also seen in the world: it is very difficult to manage an entire city that takes to the streets, ”he said in this regard. Alberto Crescentidirector of SAME, in statements to TN.

Criminals stole a printer from a bank

On the other hand, in the midst of the riots, a criminal also stole a printer from one of the premises in the area, which according to the first versions would be a bank, but was identified and captured after a few minutes.

The moving letter that Messi published in the middle of the celebrations in Argentina for the World Cup: “Many times failure is part of the path”
The photo of Messi sleeping with the World Cup after his arrival in Argentina
More than 4 million people took to the streets to celebrate the title with the National Team: the Obelisk, the Plaza de Mayo and the AU collapsed May 25
The dangerous moment in which a cable made the National Team players stagger while they were traveling in the micro convertible

Serious incidents at the Obelisk: fans who had gone to wait for the Argentine team attacked the Police and 21 troops were injured