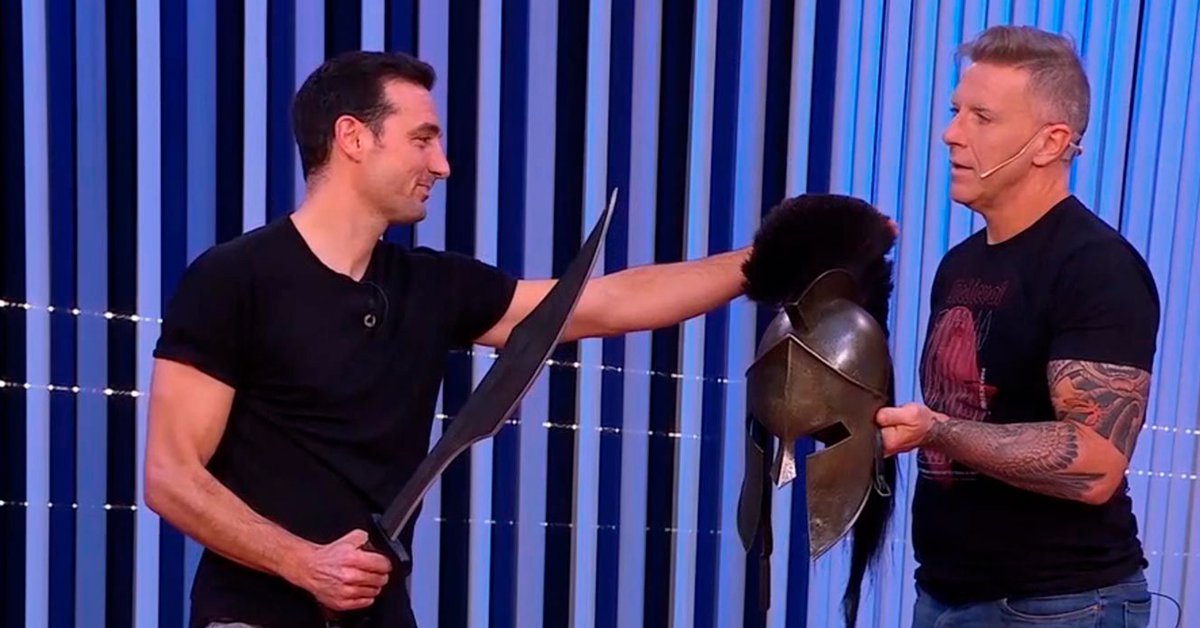 After 28 years, Argentina raised the Copa América again. Nothing more and nothing less was imposed than against the classic rival Brazil and the legendary Maracana. To celebrate the achievement of the trophy, Lionel scaloni went to the program FShow that Alejandro Fantino commands in ESPN.

During the interview, in addition to tell details about the group that was formed (baptized as the Scaloneta) and analyzing some of his footballers, the technical director swore “not to be afraid” when receiving the sword and the helmet of Leónidas.

The photo that the driver shared after the program

La Scaloneta and the secrets of the Selection group:

Scaloni: “I realize that we achieved something very nice”

• “From what they have been telling me, something nice has been given. I hope to continue corresponding. I don’t look at networks. I have Twitter, but I’m not active. They did give me photos. It’s good that people believe in something ”.

• “It was atypical. We had to play two qualifying matches before the Copa América and I felt that the players understood us all. And they were predisposed, because whoever came from outside had to come directly to the premises. They couldn’t go see the family. They went to lock up there. We were all lined up. That is creating something ”.

• “I didn’t want to go to celebrate, I think it’s more of their credit. Not for wanting to get credit for myself. A coach has to do what is right and necessary, whatever is necessary at that moment. It’s all of them. They made a group. Merit of the oldest and the youngest. They all lined up, and naturally. They asked us to do a barbecue alone, to get to know each other and mix in the places they were sitting. And they had a better time than ever”.

• “We make a rectangular or round table depending on the place. Let everyone look at each other. There are 28 players. From day one we didn’t want separate tables. Because we think it’s good. After each one, I sit next to Walter (Samuel) and that one next to Ratón (Ayala). They choose where they sit, but they all see each other. They rarely change places, but I have no problem ”.

• “Many of the times that I finish doing something I ask them if they are convinced of doing it. I have rarely been told no. Imposing does not go with me. Someone else is doing well because of his personality, but not me. I believe in the other, in that the player believes ”.

• “It is a sense of belonging, of being part of something. They enjoyed the moment where they were. I gave them an example that I never played a Copa América semifinal, enjoy it. If you don’t enjoy it, there’s no way it’s going to be good for you. If they enjoy it, they have fun. That’s the idea, and I think things work out better. They have to know that they are privileged, that they are in the National Team ”.

• “Absolutely nothing happens to me with those who criticized me. From my heart I say it. It is part of where I am. It is not worth having a grudge because it is part of making people think and speak. What I’m saying is that if we manage to be aligned all over the world, we are even stronger ”.

• “If people knew these players closely, they would fall in love. They love Leo for being the best player in history, but they would love him more if they knew how he really is. He has given us, in addition to football, many things ”.

• “I can’t say what we talked about during the hug, but it was because of the fiber. We spoke two or three days before, things that happened later. He is a human being, and one of the best I have ever met. I would like to see someone with a 24-hour camera on top. I wouldn’t take it. And on top of that, he plays well. I think he deserved it, honestly. I was waiting for him and luckily we did. Even the colleagues were happy ”.

• “He’s a kid that you want to take home, he always pulls forward.”

• “He made a football change a couple of years ago. In the previous Copa América we put it at 8 and from there it didn’t come out anymore. It gave us balance, play, passion, egg, claw, contagion, good vibes. This is how they see it. He is an example for others ”.

• “He had an incredible season at his club. Franco (Armani) came with COVID-19. And I want to highlight Franco, because it pulls forward. And he suffered it, because he was testing positive for three weeks. And he never got buggered. I talked to him, and he told me ‘I’m still here, I’m not going anywhere.’ Those are things that add up. Draw is very optimistic, sometimes too optimistic. He even threw out that we were going to be champions in the quarterfinals. When you have confident players and in a good moment, it is much easier ”.

• “Hugo Tocalli told me 4 or 5 years ago, that there was a 2 in Belgrano de Córdoba. ‘Remember that name,’ he told me. He went to Italy, where it did him good. It has no roof. It has a very high level. He played the final in difficult conditions ”.

• “The Egg is a boy that we appreciate in a way …. Silent is the word, to get the words out … But when he speaks, he speaks just enough. And when he plays, he does it and hits. I like to have it.

The substitution of Agüero and Ángel Di María:

• “In post-match training, those who train hard are those who did not play. And he was the first to infect his colleagues. Angel too. I was never mad at him. When he speaks on that note, I call him and we make a video call. And we both started crying. I really appreciate it. With him I lived strong, important things. After the World Cup in Russia, which I did not know I was going to direct the National Team, I told him not to get off this boat. Later I did not call him for football reasons. I had Nico González and Ocampos, who were doing well. He got the message. “

Fantino baptized Scaloni as the “Leónidas de Pujato” and they exploited the memes on social networks
What did Scaloni say when asked about Marcelo Gallardo’s desire to lead the National Team?
The story of Omar Souto, the man Messi hugs in the symbolic photo of Argentina in the Copa América: “Now that he won, you can see everything that Leo does”
Who is Antonia Farías, the only woman in the photo of Argentina, champion of the Copa América in Brazil