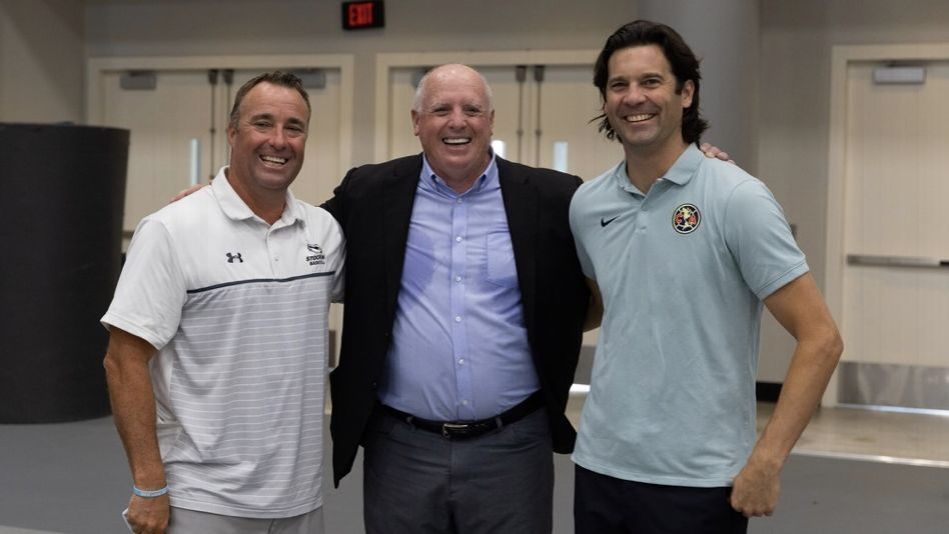 Prior to the duel against Philadelphia, the América coach took advantage of a free space to recall experiences and anecdotes that he lived in an educational institution in the United States.

Tim Lenahan, former coach of the Stockton University, he called Santiago Solari to remember old times and make possible a reunion between the now coach of the America and his former university, prior to the semi-final of the return that the Eagles have in the Concacaf Champions League.

The match against him Philadelphia Union is the scale that has a Santiago Solari In the United States, for that reason, and the proximity of the headquarters of the return match with his former university, made a lightning reunion possible.

Solari went to the United States in 1994, thanks to Tim Lenahan convinced his father and uncle that Solari could stay for a time at the University of Stockton, after being sparring for the Saudi Arabian National Team in the World Cup organized by the USA. It was the time before history with River Plate, Real Madrid and Inter Milan, the years in that the “Indiecito” still wondered whether or not to continue in professional football.

With the team of StocktonWhile perfecting his English to sing the songs Massive Attack, Portishead or Thievery Corporation, he was established as the rookie of the year in the 1994 season of the United States third division. In the anecdotes that were remembered are the tardies to class or the singing of the nursery rhyme “I’m a Little Teapot”, as a penalty for not fulfilling any of their obligations in music class.

The breath he took Solari, just before the game against him Philadelphia Union, which defines the first finalist of the Concacaf Champions League and brings the former Real Madrid coach closer to his first championship with the Eagles.

Solari, on his visit, he left a signed shirt, which reads “with much affection for the Stockton University and my friends ”, invited Tim Lenahan and some acquaintances to the match against him Philadelphia Union, hoping to say goodbye to the United States with the ticket to the end of the Concacaf Champions League, in front of the America.