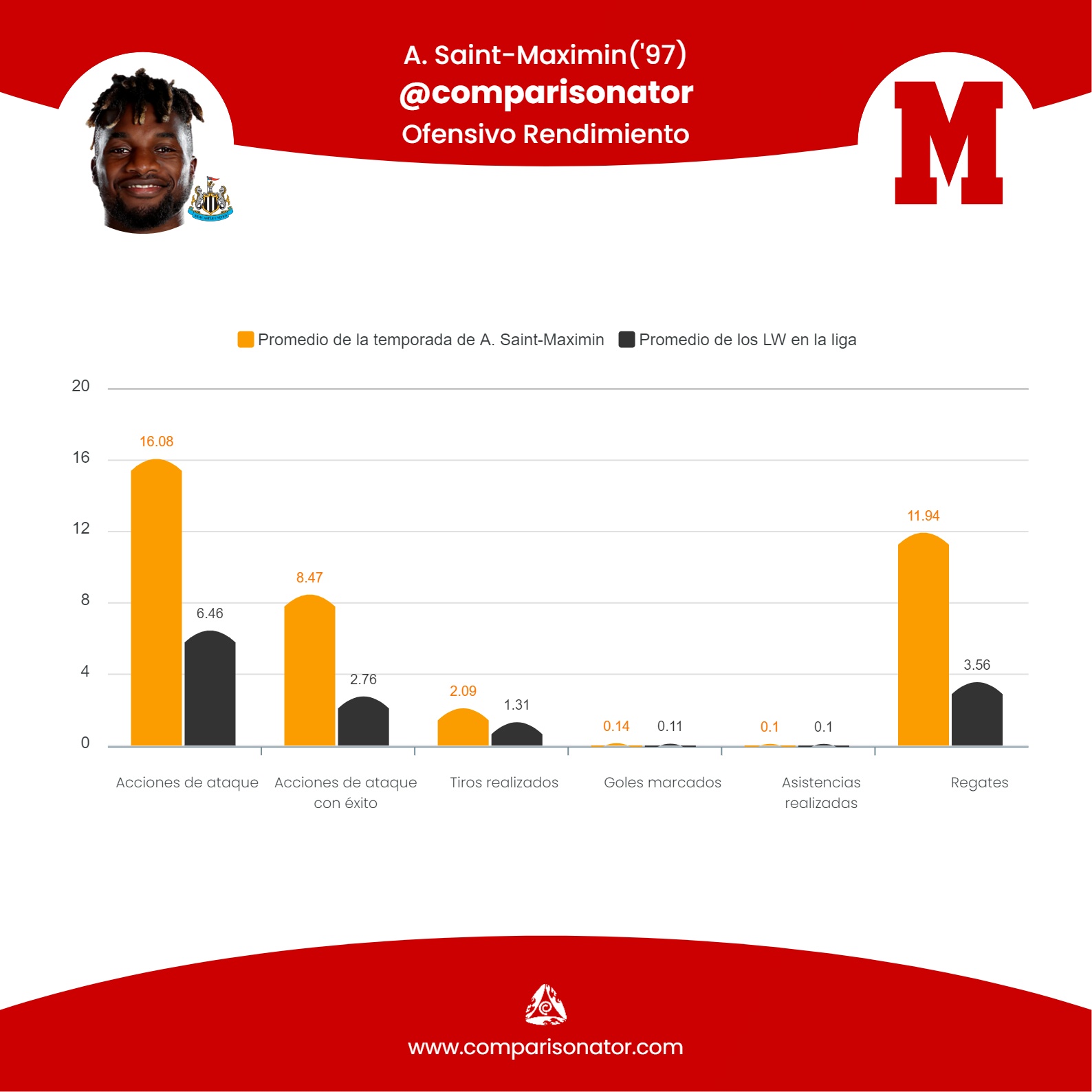 Let’s start from an irrefutable premise: Allan Irne Saint-Maximin (Chtenay-Malabry, 12-3-1997) is a different player, different. The Newcastle winger gives the impression of sometimes playing for himself. In others, however, he seems to be playing against himself. Spectacular is, of course, and a while. His dribbling and his top speed cause a real furor in FIFA’22… but also in the Premier. He’s not just a video game player.

Saint-Maximin’s offensive performance vs. other left wingers in the Premier. Source: Comparator.

Performance in duels of Saint-Maximin vs. other left wingers in the Premier. Source: Comparator.

There are more. According to ‘Fbref’, the French attacker -he has never gone with the absolute- is the fourth player who carries out the most driving in the Premier (82) in the final third of the field and the seventh who receives the most fouls (71).

The best dribblers in the 5 major leagues according to ‘Opta’

His style, too individualistic, has ‘earned’ him a lot of criticism, but Saint-Maximin defends him to the last consequences. The Newcastle winger plays for and to have fun. Pure ‘show time’.

“I want to do things that are impressive, that change the rules, that’s my goal. I want to achieve what Michael Jordan did in his day, which changed the lives of some people. That’s where the real beauty lies,” he acknowledged in an interview with ‘So Foot’.

“I have nothing to envy Man”

Another of the ‘highlights’ of Saint-Maximin’s interview with ‘So Foot’ It was time to talk about Sadio Man, a Liverpool winger.

“Those who have played with me know very well that, in terms of pure quality, I have nothing to envy Sadio Man“, he confessed. What’s more, he added: “The day I have a player capable of finishing my actions give 10-15 assists a season and change people’s perception of me in their head.

This season, the former Nice player has collaborated in the ‘resurrection’ of Newcastle with five goals and four assists in the 34 games of Premier League that has disputed.

Saint-Maximin: “I want to change the rules like Michael Jordan did”