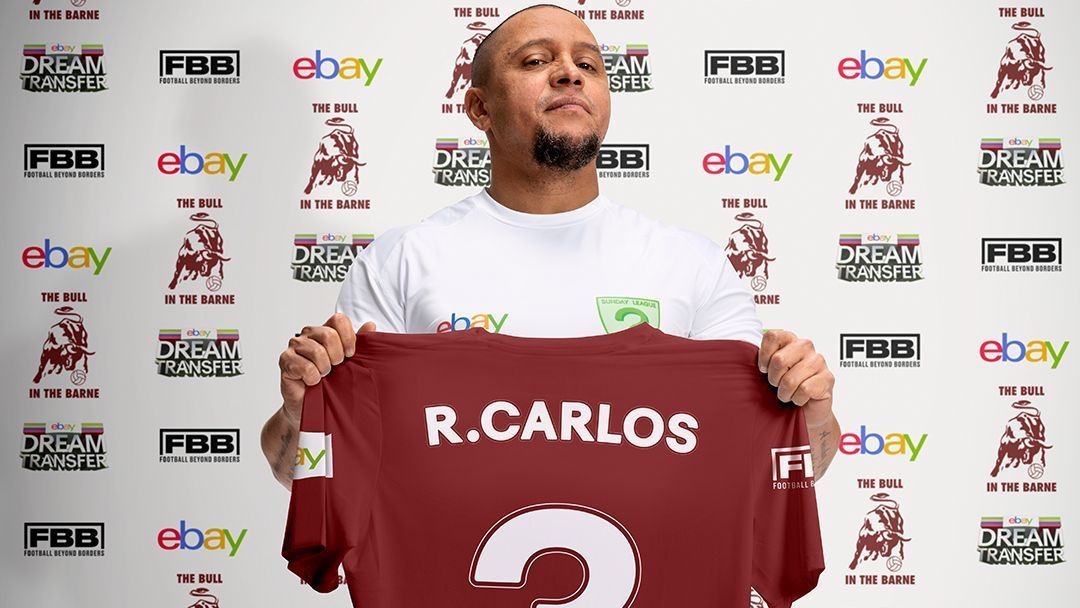 The amateur team Bull In The Barne United, from the Sunday League of Shropshire, from England, managed to join their ranks with the world champion in 2002, Roberto Carlos

While players like louis diaz and Pierre-Emerick Aubameyang made headlines during the winter transfer window, one deal that managed to fly under the radar was for an amateur team from the Shropshire Sunday League, England. The squad made a miraculous move to sign the legend Real Madrid Roberto Carlos.

The 2002 World Champion and winner of three Champions League completed a surprising move to Bull In The Barne United in January as part of eBay’s Dream Transfer. The 48-year-old, considered one of the best left-backs in history, had last played for the club Delhi Dynamos of the Indian Super League in 2015.

The Dream Transfer dynamic was open to anyone associated with a Sunday League club in the UK, with an entry fee of £5 giving teams the opportunity to add a professionally experienced player to their squad. Who says it’s impossible to find value for money in January?

Yes OK Robert Charles was added to the list of Bull in the Barnethe Dream Transfer competition also saw the former England international Eni Aluko play in the Sunday League with the club Pevensey and Westham F.C. two weeks ago.

All funds raised from the raffle and event will be donated in support of Football Beyond Borders, a charity that helps disadvantaged youth in communities across the country.

Bull in the Barne is a pub team formed over 30 years ago. Hailing from rural Shropshire, they are plying their trade this season in the second of four tiers that make up the District Sunday League. Shrewsbury. They are led by their goalkeeper Ed Speller, who admitted that he was doing his best to control the excitement of his players during the build-up to the big day.

“Everyone is extremely excited! It’s a once-in-a-lifetime opportunity,” he told ESPN. “I think they will calm down, but on game day everyone will be focused on playing and having fun. I know for a fact that this will be a story to tell for years to come!”

Asked how he planned to offer tactical tips and advice to a man who played 125 games for Brazil, Speller admitted he found the task more than a little daunting.

He said: “Managing such an amazing footballer is a whole new level for me! I will probably talk to him that day to explain how the team plays, but he has so much knowledge and experience at the highest level that I have no doubt he will fit in.” perfectly”.

Having such a legendary player on the local pub team sparked a lot of interest. Fans young and old flock to watch him play, with some using any means available to get the best view.

Looking into the game itself, Speller also revealed that the arrival of Charles to Bull in the Barne he could be a source of friction with his left-back Liam Turrall, though he hoped to find space for both players on the pitch.

“Obviously Roberto is the best left-back to ever play, so we’ve told Liam several times that he might not play,” Speller said. “I would like to see Roberto playing further up the pitch so that Liam, who is Shropshire’s best left-back, can also have his moment to shine.”

In fact, Charles he was included in Speller’s squad of the day for a friendly against Harlescott Rangers on Friday, and started on the substitutes’ bench. Following in the footsteps of compatriot Kaká, who appeared out of nowhere to contest a six-man match in London a few years ago, the Brazilian legend had to settle for carving out a spot on the substitutes as his new full-back got things going.

After causing quite a stir in the Hanwood Village Hall Recreation Center, Charles he finally came off the bench and experienced the tumult of English amateur football for the first time.

He even got on the scoreboard, coldly scoring a penalty, but Bull in the Barne lost 4-3.

After a fairly low-key performance on his debut, the Brazilian handed the Man of the Match award to his teammate Callum Bebb.

Carlos was all smiles as he posed with the rest of his Bull in the Barne team-mates after the final whistle, including his manager Ed Speller, who can now be counted among the luminaries as Fabio Capello, Guus Hiddink and Vincente del Bosque who have trained the ex-soccer player from Rio de Janeiro.

Believe it or not, this isn’t Carlos’s first flirtation with the West Midlands football scene – he came close to signing for Birmingham City early in his career. As a youngster, he received an offer to move to St Andrews in 1995 after scoring his first international goal in a 3-0 win over Japan in the Umbro Cup, an exhibition tournament staged in England as a precursor to the Umbro Championship. Europe of 1996.

City had just been promoted to the Championship (then known as the First Division), but Charles resisted and finally signed for the Inter de Milanwhere he played with Roy Hodgson.

Regarded as one of the best left backs to ever play the sport, Charles won 20 trophies with teams like Inter and the Real Madridas well as a world Cuptwo Americas Cups and one Confederations Cup with the Brazilian team.

He is also famous for his “impossible” free kick against France during Le Tournoi in 1997.

The highest level of decoration that boasted Bull in the Barne 2021-22 is the medal that belongs to manager Speller after winning a junior cup final while still in high school.

“Me and a lot of the guys have fond memories of youth soccer tournaments as well,” he said.

Something tells us that after today, they may have a new milestone in their career.

Roberto Carlos, Real Madrid legend, signed with a team from an English pub