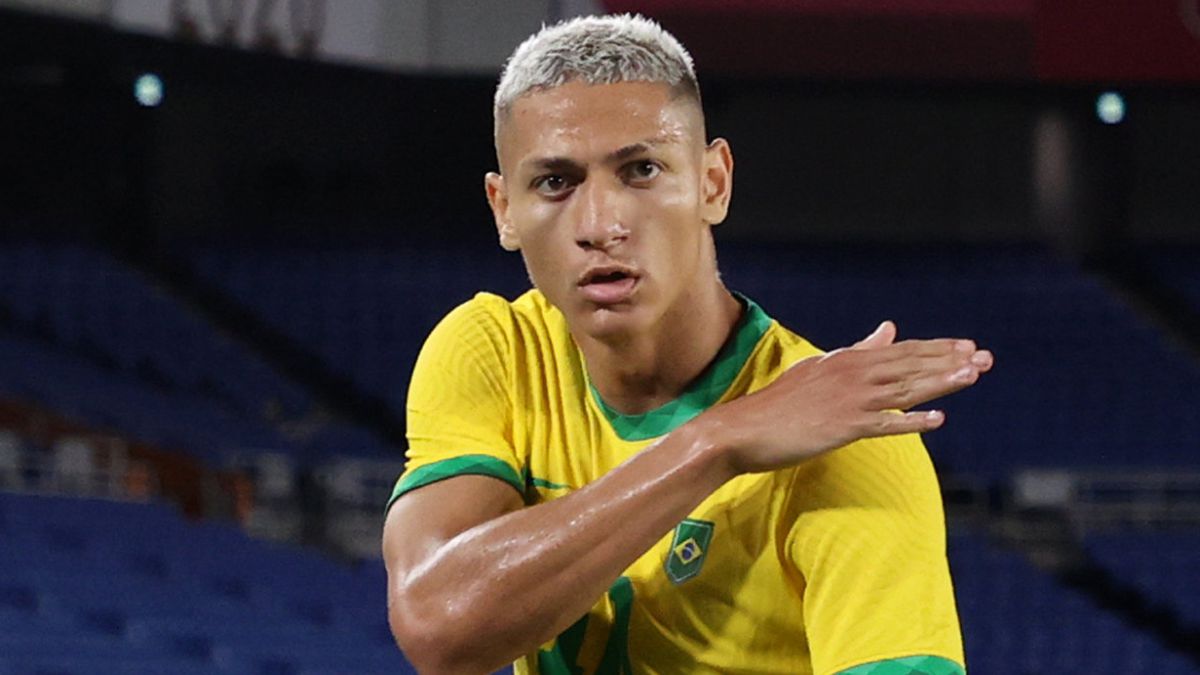 Brazil thrashed Germany in their Tokyo 2020 debut with great collective exhibition where Richarlison flashed. The Everton forward inherited Neymar’s ’10’ and fearlessly assumed the role of protagonist: he scored a hat-trick and led the young Canarinha who starts her defense of the Olympic gold with enthusiasm.

Brazil dominated the game during the 90 ‘, finished 21 times on goal against just eight of the Germans and only failed to achieve a wider result thanks to a great performance by the young German Stuttgart goalkeeper, Müller, who saved a penalty and made a few interventions that avoid a historic win. Richarlison and Brazil began their siege early. At five minutes, Dani Alves stole a ball in defense and set up a counter at high speed. He launched Richarlison who, between the two centrals, assisted Matheus Cunha who entered the area from the left and finished powerfully, forcing Müller to make a great save.

The high pressure from the Brazilians at the start of the game in Germany was suffocating and quickly took effect. In the eighth minute, Matheus Cunha stole a ball on the right wing and touched for Antony. The Ajax winger then pulled out of the hat a masterful deep pass, between four German players, that left Richarlison alone in front of the rival goal. Müller managed to stop the first shot but the Everton forward did not waste the rebound and scored the 1-0.

Richarlison almost scored the second five minutes later, when he took advantage of an error by the German center-back Pieper, who lost the ball on the edge of the area. The Brazilian forward got rid of the goalkeeper but the shot came out weak and was rejected by the defense.

The young Everton star remained ubiquitous, scoring second on 23 ‘, after a nice combination between Bruno Guimarães and Arana on the left. The Lyon midfielder shot the former Sevilla back who crossed perfectly, on the head of Richarlison, who entered like a rocket and finished off with a powerful, unstoppable header.

Insatiable as a shark smelling of blood, Richarlison wanted more. And in the 31 ‘he scored the third, a great goal. It was after a beautiful play by Matheus Cunha that he got rid of two defenders and assisted the ’10’ who, from the front of the area, finished off with the inside instep of his right foot placed on the left square of Müller’s goal.

The Germans began to distribute kicks left and right to try to stop the Brazilian striker, who suffered two very hard fouls in less than ten minutes, Arnold and Pieper, both punished with yellow cards by the referee. Brazil had the opportunity to extend the score twice before the break, both with Matheus Cunha.

Forward Hertha, a top scorer for the Olympic team with 18 goals in 19 games, missed a penalty that he forced himself when he attempted a hand-blocked shot by a German defender and then blew a one-on-one opportunity. Both shots were saved by Müller. It wasn’t for the young Sttutgart goalkeeper, Germany would have gone into halftime with a historic win.

If on the one hand Müller saved the Mannschaft from ridicule, the same could not be said of Santos, who failed as soon as the second half started and gave the Germans a treat. Amiri tried a low-powered shot from the edge of the area and the 31-year-old veteran Atlético Paranaense goalkeeper was fooled by the bounce of the ball and swallowed what should have been an easy intervention.

Brazil did not feel the blow and continued to attack. Stach received the third yellow of the game for the third violent foul against Richarlison, in 59 ‘, and in 63’ Arnold was sent off for his second yellow after a hard tackle against Dani Alves.

Scare in the second part

With Bruno Guimarães very active in creating the attacking plays, Brazil arrived very easily but sometimes stopped against a solid Müller and sometimes due to the ineffectiveness of the spikes. Reinier, who came in in the 74th minute to give Richarlison a well-deserved rest, wasted at least three clear chances against the German goal.

Missed opportunities, relaxation and even Brazilian indifference to a quiet game that seemed resolved could cost dearly. In 83 ‘Ache headed Germany’s second, after a cross from the left. The Eintracht Frankfurt forward climbed higher than Nino and shot to the right of Santos, who again looked like he could have hit the ball.

In addition, Paulinho closed the scoring with a goal from Paulinho, who received a beautiful long pass from Bruno Guimarães and finished off powerful, to Müller’s squad.

In the end, a Brazilian victory that on the scoreboard seems more complicated than it really was. A good debut that helps to excite the Canarinho group in search of the two-time Olympic championship.