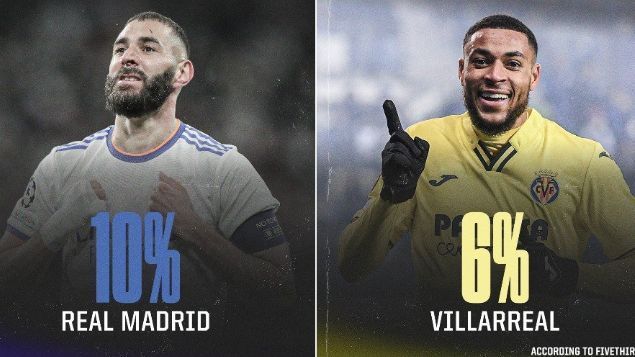 Spanish teams are not favorites to win the ‘Orejona’ against Premier League clubs.

Real Madrid starred in a historic game last Tuesday at the Santiago Bernabéu by coming back from their tie against Chelsea and qualifying for the Champions League Semifinals. However, the Merengues only have a 10% chance of conquering the ‘Orejona’.

According ESPN Soccer Indexthe template led by Carlo Ancelotti is not the favorite to be crowned new European champion after eliminating the “Blues”, who won the title last summer.

In the Spanish capital, Chelsea offered a wonderful display at the Bernabéu and with the score at 0-3, the Londoners were about to sign one of the most important comebacks in the history of the Champions League. However, a goal by Rodrygo in the final minutes equalized the overall score and sent the game into extra time, an instance in which Karim Benzema He would get the score that gave Madrid its ticket to the Semifinals.

At Anfield, Liverpool secured their pass to the Semifinals last Wednesday by drawing three goals with benfica and win the tie by aggregate score of 6-4. For his part, the City played a tough match at the Wanda Metropolitano against a Atletico Madrid who tried to match the tie until the last minute but the ‘Colchoneros’ could not against the leader of the PremierLeague.

According to ESPN Soccer IndexLiverpool and Manchester City are the favorites to win the Champions League. Both the Reds of Jurgen Klopp As the City from Pep Guardiola They have a 42% chance of becoming champions of the highest competition at the club level.

Regarding Villarreal, a team that has become the biggest surprise of the Champions League 2021/22 after eliminating the Juventus Y Bayern Munichthose led by Unai Emery they have a 6% chance of lifting the ‘Orejona’.

real Madrid will face Manchester City in the Semifinals. The first leg will be played on April 26 and the second leg will be held on May 4.

Liverpool will face Villarreal and the first duel will take place on April 27 while the second leg will be played on May 3.

Real Madrid, with a 10% chance of winning the Champions League; City and Liverpool, the favorites