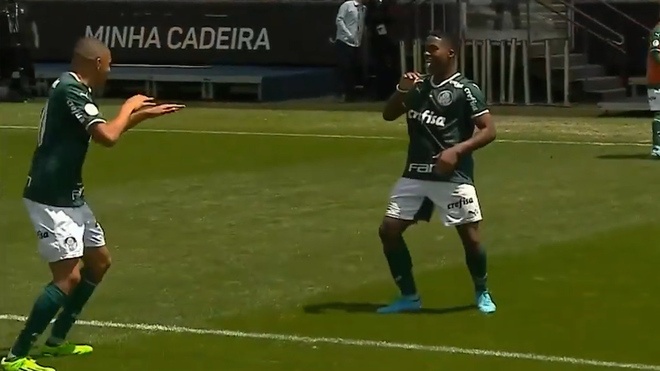 Lhe leaders of Real Madrid have already got down to work. Endrick’s signing is a priority. The Brazilian has not disappointed in his first games with Palmeiras and its price rises as the games pass. The race for his signing was already launched weeks ago and Real Madrid wants to finish a job started a year ago. For this, a leader of the white club is in Sao Paulo carrying out a final exam on the striker and, incidentally, starting negotiations with the Brazilian club in a first attempt to close an agreement for the transfer of the young Brazilian striker.

Any understanding with Palmeiras, either with Real Madrid or with any other European team, goes through the continuity of the ‘nine’ in his current team until July 2024, moment in which he could already make the leap to Europe when he turns 18, the age established by FIFA for international transfers. Despite this, from the Santiago Bernabu they understand that time should not pass and they are already looking for that agreement before other clubs, especially PSG, enter the scene with off-market offers.

The one of these days is the third visit of Real Madrid to Sao Paulo in the last months. The objective in all of them has been to ‘work’ the signing of a striker who is barely 16 years and three months old, but called to be someone important in football. In the European dawn on Wednesday he started for the first time and actively collaborated in the triumph of Palmeiras against Fortaleza by four goals to nil.

Endrick scored a goal from a pure striker, one of those that define a footballer with goals in his veins. His contribution did not remain as long as he closed the account. The Brazilian once again demonstrated that despite being only 16 years old, his football does not detract from the fact of being one more in the current champion of the South American country.

Real Madrid is not the only one bidding for Endrick

So far there are several clubs that have approached his environment, but none of them has submitted a formal offer to Palmeiras. The leaders of the Brazilian club know that they have before them the future of the entity for the coming years. The exit clause is 60 million euros, but there is an agreement by which it will be reduced to an amount between 35 and 40 million.

At Real Madrid they know it’s a risky bet, but they are also aware that it is time to do it. The deadlines are advanced with respect to Vincius, Rodrygo or Reinier, the last to arrive. All indications point to being a challenge with a high probability of having a happy ending. The conclusion they have reached is that it is worth the effort and the bet.

The initial plans spoke of not focusing on the possible signing until late in 2023, but the appearance of other teams forces the deadlines to be accelerated. PSG is the great enemy, but not the only one. The family seems to be clear about wanting to see Endrick at Real Madrid, but there are many other factors that the Madrid entity must overcome.

These days are going to be key to knowing if the three-way agreement between Real Madrid, Palmeiras and Endrick can be closed. The white club is already in Sao Paulo and the next weekend to witness a game of the striker again. However, the contacts will already have been started.

Real Madrid, in Sao Paulo to negotiate for Endrick