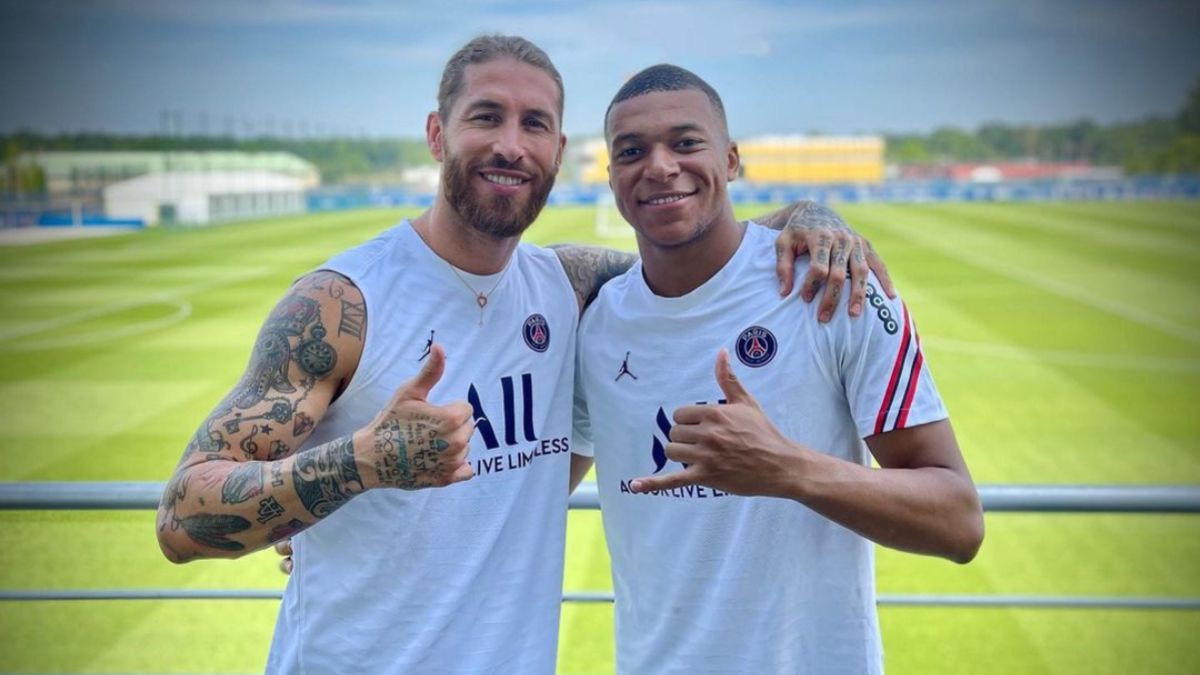 The image that illustrates this text is from yesterday. Sergio Ramos posted it on his social networks. It is the first time that he was able to train with Mbappé, now a brand new teammate. The photograph that many madridistas would have liked to see … but with a different shield on their shirts. Now, part of that madridismo doubts about If the figure of Sergio Ramos will become an ally of Madrid to sign him or… if the opposite: that is to say, force yourself and try to convince the Parisian attacker to continue. It is evident that PSG with Mbappé is much more competitive and that favors the camero in his intention to win another Champions, the great objective of the Qatari-based joint venture. For Ramos it would be his fifth Orejona and that would match players of the stature of Di Stéfano, Rial, Juan Alonso, Santisteban, Marquitos, Lesmes, Zárraga, Maldini, Costacurta and Cristiano Ronaldo. Ahead will continue to have Paco Gento who, with six, is the quintessential king of the top European club competition …

Sergio Ramos has always been a champion of the figure of the Frenchman, as well as that of the Brazilian Neymar (it should be remembered that He assured that it was this one who convinced him to sign for the French team), but now the tables have turned. Once he has reached the Parisian dressing room, the defender wants the Bondy striker to renew and extend his stay with the Parisians: the wink “Ici est Paris!” (“This is Paris”), the battle cry of the fans (similar to the legendary ‘This is Anfield’ in Liverpool), fixed in the photo and on their social networks, is one of the first signs of where the camero’s intentions are going.

“All the great footballers have to play for Madrid sometime,” Sergio Ramos was quick to say the first time he was asked about Mbappé’s future at the Whites. “But it is clear that PSG with him is more competitive. I would like him to continue here because I like to play with the best. I don’t know what Kylian has in mind but it makes a difference, it is very young, there is a very good team here and it needs the great players ”, declared the Sevillian in one of his first speeches as a new player for the Paris team. It was the first sentence perhaps to satisfy its new leaders and Parisian fans, although he dropped an affectionate gesture on the old club that he captained since 2015 and with which he raised three Champions in a row.

But The French player remains very firm in the idea of ​​following the roadmap that he drew with Madrid more than a year ago. His environment was in favor of the white club taking a more active attitude in this final stretch of the operation. Not so much in the public statements that their leaders could make, but in that internal pressure that is feasible with calls from president to president. The reality is that PSG will let its star escape for free if it does not sell it now, because Mbappé will sign with Real Madrid, in that case, in January 2022. He will be able to do so and continue playing the remainder of the campaign in Paris . What is clear is that Kylian’s next team, once he leaves PSG, will be Real Madrid.