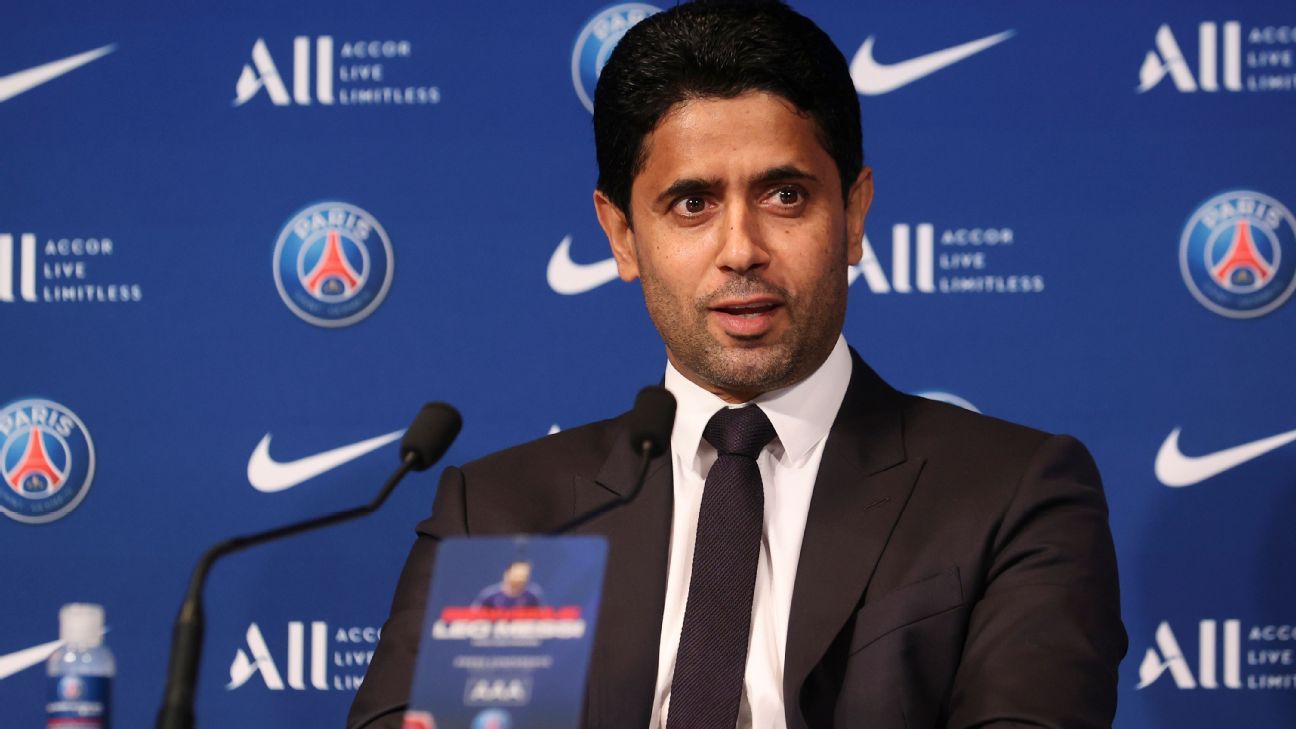 In its most recent issue, France Football magazine published an extensive profile on Nasser Al-Khelaifi, president of PSG and one of the most powerful sports leaders in the world.

For the report, the French gazette sent a journalist to Qatar, where Nasser was born in 1973, and spoke with several members of the family Al-Khelaifi, as well as with friends and former coworkers.

Through the “stories”, a timeline was drawn showing how a mediocre tennis player became one of the most famous names in world football.

Contrary to popular belief, Nasser Al-Khelaifi was not born in a golden cradle. He comes from a simple family, in which his paternal grandfather, Abdallah, was a pearl fisherman and responsible for all income.

Over the years, natural pearls began to be replaced in the market by synthetic ones, and the Al-Khelaifi they changed their business, going to common fishing.

Once, Nasser, who was only 5 years old at the time, was accompanying his father, Ghanem, when a tragedy almost happened. They were at sea, a rope became entangled with the ship’s engine and was damaged.

Father and son were alone at sea for three days, without fresh water, until they were rescued by a passing ship that saw them.

“I still remember to this day how happy we were when we saw that ship on the horizon. To this day, I consider it the happiest day of my life, because I honestly thought that we would not survive,” he said. Nasser.

When they returned to the coast, their mother wore black clothes in mourning, because she thought they had died.

But anyone who thinks that Nasser Al-Khelaifi He was afraid of the sea after that, he is wrong.

“I am a man of the sea. When I was young, I would spend hours sitting on the sand looking at the water. I still do it from time to time,” he said.

COCKROACHES IN THE ROOM

Nasser He lived with his entire family in a house in Doha, the capital of Qatar. His home was located across from the only tennis court complex in the country, and When he was 11 years old, he went to work as a ball catcher to earn some money.

One day, the American coach who was in charge of teaching the rich who frequented the courts, named Mike Reis, invited the ball boys to play tennis or squash for a few minutes. Nasser quickly became fond of the world of the racket and made a decision: he would become a professional tennis player.

“When he was little, his ambitions had no limits. He wanted to be a world champion,” said Ghanem, his father.

Nasser stood out in the Qatari tennis world, even because of the low competition, and managed to become the first professional player in the countryHe even had a reasonable sponsorship to compete in tournaments around the world.

TO Al-Khelaifi he liked to play both singles and doubles. When associating, his most common companion was Sultan Al-Alawi.

“He was, at the same time, my partner, my ‘big brother’, the brain of the team and our guide. He was also our cook (laughs). His food was not very good, but over the years, he even learned to make pasta with seafood, it tasted good, “joked Sultan.

In those days, luxury was little. Before playing a tournament in Toulon, France in 1998, Nasser had to leave the hotel room where he slept due to a roach infestation.

He drove north in his car, sleeping in the back seat, and woke up with a terrible stiff neck. He was quickly eliminated in the first round.

“When he won, he spent some money to sleep in the hotel. If he lost, he would spend the night in the car and, in the morning, he would leave to play in some other tournament,” he reported. Khaled Al-Khelaifi, Nasser’s younger brother.

Despite being a tennis player very dedicated to training, as the interviewees said, Nasser was never able to truly excel in international tennis.

Throughout his career, which lasted until 2003, He only played two ATP (professional division) level matches.

The first, at Sankt Pölten in 1996, was unlucky enough to face world number 2, Austrian Thomas Muster, and was crushed 6-0 6-1.

The second meeting took place in 2002 at the ATP in Doha. Once again, he was defeated, but now by the Uzbek Oleg Ogorodov.

In other words: during his entire professional career in the ATP (not including matches in competitions such as the Davis Cup or the Asian Games), he has only won four matches. His best ranking was 995.

This did not, however, prevent Nasser live some spectacular stories, like the one that took place in the doubles clash between Qatar and Lebanon at the 1997 Asian Games.

During the game in Beirut in a crowded stadium, Al-Khelaifi was hit in the neck by a strong shot from his opponent, upsetting Sultan Al-Alawi, his partner at the time.

“I told Nasser, ‘Let me fix this.’ Nasser replied, ‘No, Sultan, you don’t have to do anything!’ But I was never a diplomat like him,” Al-Alawi smiled.

“The first time I went to the net, I aimed right at the opponent’s face. The problem is that the racket slipped out of my hand and went straight to his face! The court was invaded by the fans. Nasser entered . We were disqualified and had to leave the place with police protection, “exclaimed the sultan.

WHO HAS FRIENDS, HAS EVERYTHING

It was in his days as a ball catcher at the Doha court complex that Nasser made the most important friendship of his life: Tamim bin Hamad Al Thani, then crown prince to the throne of Qatar, who enjoyed playing tennis.

At that time, who was already considered the best local player, served as ‘sparring’ for Tamim, who is six years younger. Through the rackets, they established a strong bond, which would have important consequences for Al-Khelaifi.

After leaving professional tennis and graduating in economics from the University of Qatar, Nasser was appointed in 2008 by the Al Thani family as the new president of the Catari Tennis Federation, a position he still holds today.

Later, when the owners of the Qatari throne decided to invest heavily in the sport, buying the Paris Saint-Germain, Nasser was placed as president of QSI (Qatar Sports Investments, the fund responsible for the management of PSG) and also of the French club.

In 2013, Al-Khelaifi He accumulated another responsibility, by being appointed a free minister in the Government of Qatar, that is, he does not have any specific responsibility, acts as an advisor and “does everything” for the Al Thani family.

Finally, between 2013 and 2014, the media giant Al Jazeera was divided between news and sports. The sports sector was renamed beIN Sports and Nasser was appointed president and CEO of the network.

Therefore, he currently runs, in addition to the Catari Tennis Federation, QSI and Paris Saint-Germain, a large conglomerate of 22 sports channels that are broadcast in the Middle East, Africa, Europe, North America, Oceania and East Asia.

According to his family, the fact that he became one of the most famous and important leaders in the world did not make him Nasser lose its essence.

When he is not in Paris taking care of the PSG, Al-Khelaifi dispatches from its modern office in Doha, where welcomes figures such as Rafael Nadal, Tom Brady and Jean Todt (former head of Ferrari and now president of the International Automobile Federation) to talk.

In his spare time, to Nasser likes to spend time with his family and have fun driving 4×4 vehicles and driving through the desert of Qatar to watch the sunset.

“The real Nasser is the guy who loves to tell jokes and likes to host banquets, always serving each guest’s plate before sitting down to eat,” says Hakim Chalabi, Al-Khelaifi’s friend since 2008 and now president of Aspire, one of the most modern sports complexes in the world, which has training centers, physiotherapy clinics and clinics for athletes’ surgeries.

According to his family, Nasser He is also known for not losing patience, even in the face of the adverse results of the PSG.

“Nasser keeps it all to himself. He never talks about his job,” says Brother Khaled, who runs seven restaurants.

“Since he started football, he has become a more serious guy. I admire his calm because I do not know how he manages. I have broken televisions for PSG games. He is even too nice, when we make fun of him. No I know how he copes. But the right attitude is his, not mine, “he added.