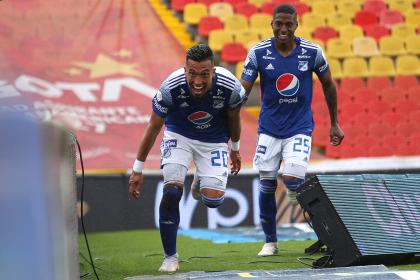 Bittersweet Week for Millionaires. Despite beating Once Caldas in Manizales and closing the third date of Liga BetPlay 2021-II with a perfect score (nine out of nine), medical problems do not wait.

On this occasion, the new member of the Albiazul clinic would be Fernando Uribe, a forward who cannot finish Sunday’s game and came out with notable signs of pain.

In dialogue with the Blu Radio program ‘Sports Blog’, Alberto Gamero spoke about the medical situation of his experienced attacker and gave his impressions regarding the possibility that he could be in the capital classic.

It is worth remembering that Millonarios and Santa Fe will play next Saturday in a duel valid for the fourth date of the League. Party that by the way will be attended by the public.

“The medical part is not serious, they already told me that the safest thing is that he will not be with us there in Barranca against Alianza the day after tomorrow (Wednesday, 8:05 pm for Copa),” said the coach.

He also gave details about the classic: “We are going to see the recovery so that he can be on Saturday, but this morning I spoke with him, just on the trip, and he told me with Dr. Catalina that it is not serious, it is simply a concussion that he had for a kick and we are going to try to lower that in this week ”.

Thus, the former National would be the great absence of the blue box, with Daniel Ruíz, for the 2021 BetPlay Cup match, but has chances, according to its evolution, to play normally on the weekend.

On the other hand, Gamero spoke about his current payroll and raised concerns about a new departure. The defense for now would only remain in its central part with Andrés Llinás, Juan Pablo Vargas and Andrés Murillo.

“There is a possibility with (Breiner) Paz that he will go to another team, so there we have only four center-backs left. The idea is to look for one more, it does not necessarily have to be a foreigner, we are already three tournament dates and it is very difficult to find, today, a central that can be adapted to what we want, at the height, we do not know from where It comes … It is not either to bring to bring ”, he concluded.