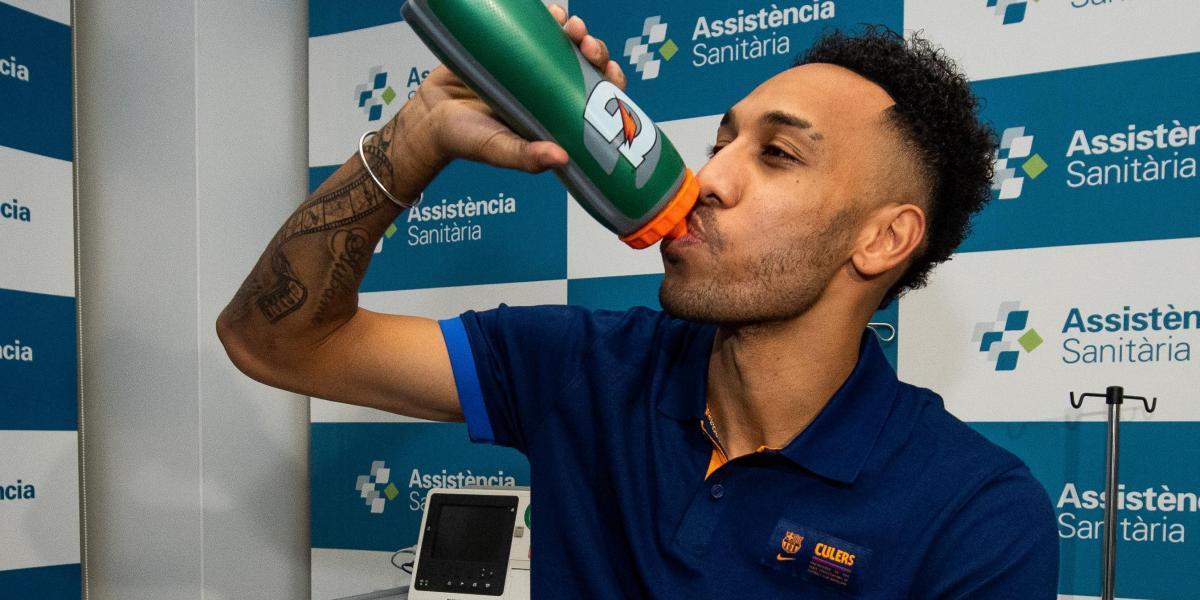 14:36The player’s father and his brothers go out to the field to pose all for an image that will remain for the memory.

14:33The footballer poses for the graphic media and performs the usual touches of the ball.

14:32It’s coming out
aubameyang to the field of play.

14:19The next stage will be the Camp Nou, where the player will wear the Barça shirt for the first time.

AUBA, TO THE FRENCH FANS
“I’m very happy to be here, it’s an honor for me to play in the league, it’s a great opportunity and I’m going to give everything”.

AUBA, ABOUT HIS POSITION
“I think that for every player that comes here he has to adapt because Barça plays incredible football. I have to adapt but I’m ready to do it. I’ve seen a lot of games and the team has a lot of quality.”

AUBA, ON DEMBÉLÉ
“Regarding Ousmane, as a player he is fantastic and what I have said before, I hope they find a solution, I cannot decide.”

AUBA, ABOUT HIS GRANDFATHER
“All the messages I’ve received are good. Everyone is happy that I’m here. It’s an honor for me to be here and I’m going to give everything for this club.”

LAPORTA, ON BEING IN THE TOP FOUR
“Our goal is still to fight for the League, then we’ll see what results. We want to win the League and if possible the Euroleague. The goals are clear, to keep fighting to win the League and the Europa League. If we don’t get it, we’ll assess how it has been played and how we approach next season.

AUBA, ON HIS PROMISE TO HIS GRANDFATHER
“It’s a family matter, he’s from Ávila, and my grandfather was a big fan of Atlético, that’s why he always said I’m going to play for another club. But as I’ve always said, my family is important to me and they are very happy that I’m here to play in LaLiga. When you’re little your family tells you things and that’s why you keep going, but it was an issue with my grandfather and wherever he is now he’ll be happy to see me as a Barça player”.

LAPORTA, ABOUT GODALL
“What has happened is that Alfons Godall has voluntarily resigned from the position of vice-president of the Barça Foundation. He considered that as there had been complaints from bosses, investors and ‘sponsors’ of the Foundation in the face of a tweet he made, he did not want to harm the Foundation and he has decided to resign voluntarily, the decision has been respected and that’s it. We have congratulated Rafa Nadal on his sporting success and we have always recognized him as an athlete who is an example of self-improvement and how to stay in the elite. Rafa is a great person, the It is a pity that he is not from Barça but we forgive him because he makes us enjoy his tennis”.

AUBA, ABOUT ARTETA
“I think the problem was only with him and he made the decision. I can’t say much, he wasn’t happy and that’s it. It happened like that. He wasn’t very happy, I stayed very calm and that’s it”.

CRUYFF, ON THE RENEWALS (GAVI, ARAUJO OR SERGI ROBERTO)

“Work is underway, first we were focused on the winter market and now that it has closed, our next obsession is the renovations and the June market, where work has been going on for a long time but now we have to finish things.”

LAPORTA, ON THE RENEWALS (GAVI, ARAUJO OR SERGI ROBERTO)
“I know they are working, Jordi, if you want to comment on something…”

AUBA, ON THE ARSENAL
“They were difficult months but I think that’s how football is sometimes. For my part I have never wanted to do something wrong and now I think that this is the past and I want to think about the present and right now that is my answer”.

AUBA, ABOUT THE END OF THE MARKET
“It was a very long day, crazy. We signed two minutes from the end. It was very long, I was with my dad at his house hoping that everything would be fine. In the end they called me in the afternoon to go do the medical check-up and I went very happy. A little stress at the end but all good.”

AUBA, ABOUT BARÇA’S FACILITIES
“Everything very well, when I arrived I felt very good. The people received me well and I am very happy. I am like in a dream and I don’t want to wake up.”

AUBA, ON HIS OBJECTIVE OF GOALS
“I don’t know if I have a number but I hope to score a lot of goals. Many would be good.”

AUBA, ABOUT HIS DECISION TO CHOOSE BARÇA
“I’ve always had a dream of playing in LaLiga and it’s an incredible opportunity for me. Since I was little it was a dream and it’s the opportunity of a lifetime. Everyone knows that Barça is one of the best clubs in the world. I’m very happy here “.

AUBA, ABOUT BARÇA’S STYLE
“I see myself ready and I think I’ve been very lucky to play in the Premier, it’s helped me a lot. I’m ready. I already want to start. In my mind I know I’m ready.”

AUBA, ON DEMBÉLÉ
“I have to tell the truth. He is training very well and as a friend of Ousmane I hope that he and the club find a solution.”

AUBA, ABOUT HIS POSITION
“I’ve talked a bit with the coach and he sees me playing as a 9 and I’m ready to play as a 9. If one day he needs me on the wing there won’t be a problem because I’m ready to play in these positions”.

JORDI CRUYFF, ABOUT THE EUROPA LEAGUE LIST
“These are the coach’s decisions, there is always dialogue, as is normal in all clubs. The coach had the difficult decision to rule one out and by analyzing the minutes, games and positions he came to this conclusion and it seems super logical to me”.

AUBA, ABOUT ITS OBJECTIVES
“It’s what I hope and dream of, to stay here and that’s why I’ll work my best.”

LAPORTA, OVER HAALAND
“Today we are busy in the immediate present, it is important because we have a season that has been complicated and what we want above all else is to try to fight for the League and the Europa League, the competitions that we have left. We are focused on this The Board and the players and the club, except for the technical secretariat, which is their job and has to work on looking at the possibilities of incorporating interesting players. I try to live on realities although I’m a romantic”.

LAPORTA, OVER HAALAND
“I will tell you that today we are pending and busy and excited about Auba, that he debut, that he scores goals and indeed we were at a gala (the Mundo Deportivo Grand Gala) and I had to go on stage and I sent a message to Mateu, and he told me ‘pareix que ho farem’. We are very proud and the whole department is working to strengthen the team and we are on the right track”.

AUBA, ABOUT HIS PERFORMANCE
“I’m ready to perform now. It’s been a long time since I played a match but it’s very clear in my head and I’m ready to play and help. I know we’re going to get back to the top little by little.”

AUBA, ABOUT THE CHAMPIONS
“I think that Barça is a great club that has to win the Champions League, that’s why coming here is an opportunity to win it. We will do everything to come back and win it”

AUBA, ABOUT HIS PROFILE
“People have known me for years, I score goals and I’m a fast striker, I hope to help the team with my goals and score a lot of goals for Barça.”

13:39aubameyang: “Good morning. I am very happy and I thank you president for the signing and I am looking forward to it, I have already said it, I am going to give everything and I have to thank the whole club. It is an honor for me to be here and play with Barça. I’m very happy”.

13:38laporta: “We’ll have him next season and we hope to have him for more years because I’m sure he’ll give us many moments of glory. I’d be thanking him for coming for a long time and I really want to see him play”.

13:38laporta: “He’s a man with a goal, we need him. I’m proud of how the football department is working, the technical secretariat. Auba’s termination contract with Arsenal didn’t come into effect until the last minute and then we were able to formalize the contracts with Barça Thanks to Mateu Alemany who is not here for a family issue. Thanks to Deco for your knowledge of Auba and its surroundings. We have been able to have a good winter window. Some incorporations are completed within the possibilities that will strengthen the squad. Thank you Auba who has become a member of Barça. 143,282 is his number.”

13:35Joan Laporta comments that “when we present a player it is always good news. He is a player who has shown his desire to come and play for Barça, that is essential for us. We are very grateful. Welcome, Auba. I want to thank the presence of his father, of his brothers, of his representatives, you have done an extraordinary job. Thank you for being here. I want to thank you for working well on this signing. We brought in a top-level player, who wanted to come and has made an effort to come to Barça It is to be appreciated and you know that when the bail is cleared, Barça is grateful to the people who have helped Barça”.

13:32They go out to act
Joan Laporta, Jordi Cruyff and Pierre-Emerick Aubameyang and they pose with the shirt and the 25 on their back.

13:19aubameyang: “I always wanted to be a footballer, it was very clear to me”

13:19aubameyang: “Since I was little I spoke Spanish with my grandparents. That’s why I speak it well”.

13:18aubameyang: “It is an honor to be the first Gabonese in the history of Barça. I speak five languages ​​(French, Italian, Spanish, English and German)”.

13:18aubameyang: “On Sunday there is a great game. I am working hard and we are going to see what we can do”.

13:18aubameyang: “That’s why I’ve signed here, to help Barça and my teammates to give back what people expect from Barça.”

13:17aubameyang: “I can help on the scoring level and I’m going to give everything to help my teammates”.

13:16aubameyang: “I really wanted to come here, that’s why I came in the morning, because I wanted the thing to be done. We waited until the last moment because it was a bit difficult with Arsenal but in the end I’m here”.

13:16Before the press conference, the player spoke to Barça TV: “I remember that the last time I was here it was a good game, Barça won but scoring is always good for a striker.”

13:06Earlier, despite being a holiday for the first team, the Gabonese went to the Ciutat Esportiva to train.

13:06The presentation press conference is scheduled to begin around 1:30 p.m.

13:06Good afternoon and welcome to the live presentation of
aubameyang as a new Barça player!