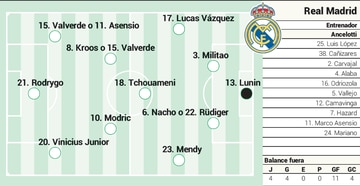 Real Madrid once again have the League in their sights after the setback suffered last day against Osasuna and that ‘forced’ him to share with Barcelona the leadership that Ancelotti’s men had held since the first day of the championship. It will be a decisive day to see if both teams arrive in pairs to the Clásico on Sunday 16 or one of the two faces the duel at the Bernabéu with an advantage. Getafe will be the third of the four commitments that the whites face in ten days.

A match for you the one Carlo Ancelotti will not be able to count on two of his pillars: Courtois and Benzema. The Belgian continues to suffer from sciatica that separated him from the matches against Osasuna and Shakhtar. Ancelotti trusts that the goalkeeper will be available in the Clásico and will book him in the Champions League to save him the ‘uncomfortable’ trip to Warsaw (three and a half hour flight). Karim, who had played the last two games after recovering from injury, did not train with the group on the eve of the game and Ancelotti, who expressed his doubts at a press conferencefinally decided not to include the French striker in the call. The third loss is that of Ceballosthat suffers an injury to the femoral biceps that compromises his participation in the remainder of the season until the World Cup.

The masterpiece of Ancelotti’s eleven will be Valverde. The doubts about the team that the Real Madrid coach can line up at the start lie in whether he places the Uruguayan in the center of the field or in the attacking trident. The ownership of Kroos and Asensio depends on what happens with the charrúa. in defense, Carletto can give rest to Praise, the second player with the most minutes on the team (893′) after Vinicius (956′). The Austrian only fell out of eleven on the first day in Almería. The other great novelty in the eleven may be the return of modric.

The possible starting eleven that Carlo Ancelotti can line up against Getafe is made up of: Lunin, Lucas Vázquez, Militao, Rüdiger or Nacho, Mendy; Kroos or Valverde, Tchouameni, Modric; Valverde or Asensio, Rodrygo and Vinicius. The Italian coach has called up 22 players for the match. The list is completed: Luis López, Lucas Cañizares, Carvajal, Odriozola, Vallejo, Alaba, Camavinga, Hazard and Mariano.

Possible alignment of Real Madrid today against Getafe in the League