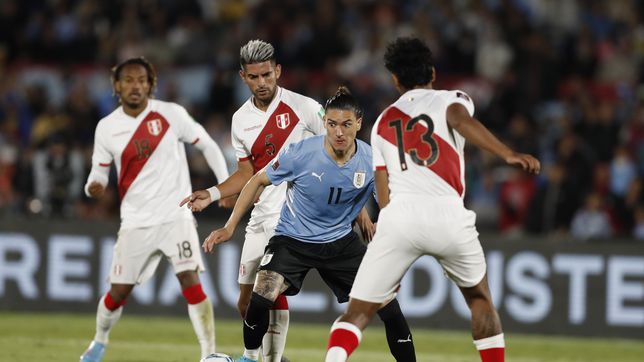 Seeing the forest and not the tree has to become the mantra of this Peruvian team, who know that everything is about to be resolved and, above all, that they have the future in their hands. Peru fell in Montevideo but did not leave defeated: the prize is too close to spend too much time thinking about what happened.

What happened: Uruguay, a team that has earned a doctorate in winning football matches half as many times as its rival, lived up to its reputation. The premises, stuck in the dead ends that Gareca raised, always collided with a Peruvian wall. Without too many ideas or rebellion, the charrúas, patient in their irregularity, did not generate danger.

Peru, rather, threatened from the beginning: Lapadula wasted a header in the small area that Uruguay does not usually allow. A failure is like this is a sin against the masters of opportunism. In defense of the Italian-Peruvian, his good movements behind the back of the Uruguayan defense were the main weapon of the Blanquirroja, who understood that he would have more spaces than he expected.

But Centenaryan irrepressible Pellistri and By Arrascaeta they had other plans. When he died in the first half, the locals, after a corner in favor and a series of inattentions by Peru in the setback, opened the scoring in the only dangerous play they generated. The Flamengo midfielder found himself with a ball in the small area and made it 1-0.

The second half, especially with the Brazil 3-0 over Chile -direct rival of the two protagonists-, something bland became. Uruguay stepped on the accelerator for about fifteen minutes, and was able to redouble the difference with an explosive and geometric shot by Valverdethat kind of Gerrard charrúa that Real Madrid enjoys every weekend.

The result was not in danger, except for some timid arrival of Trauco for his band, but bad news did arrive for the team: Carrillo left the field with a knee injury and could miss the game against Paraguay. Just thinking about the next and last date, Gareca understood that the important thing was to have all or almost all of his troops and gave Cueva and Lapadula a rest.main weapons, especially in the absence of André.

Although Peru was close in the first half, it could not be said that the defeat was completely unfair. What did seem somewhat controversial, at least, was the goal not awarded to Traucoafter his shot seemed to cross Rochet’s goal line. The VAR observed it, but did not change Daronco’s decision. In football, especially when Uruguay plays, it’s like this: you can dominate and get there, but if you don’t achieve it, the effort is in vain. The sights are now set on Paraguay: if they win on Tuesday, Peru will have one foot in Qatar.