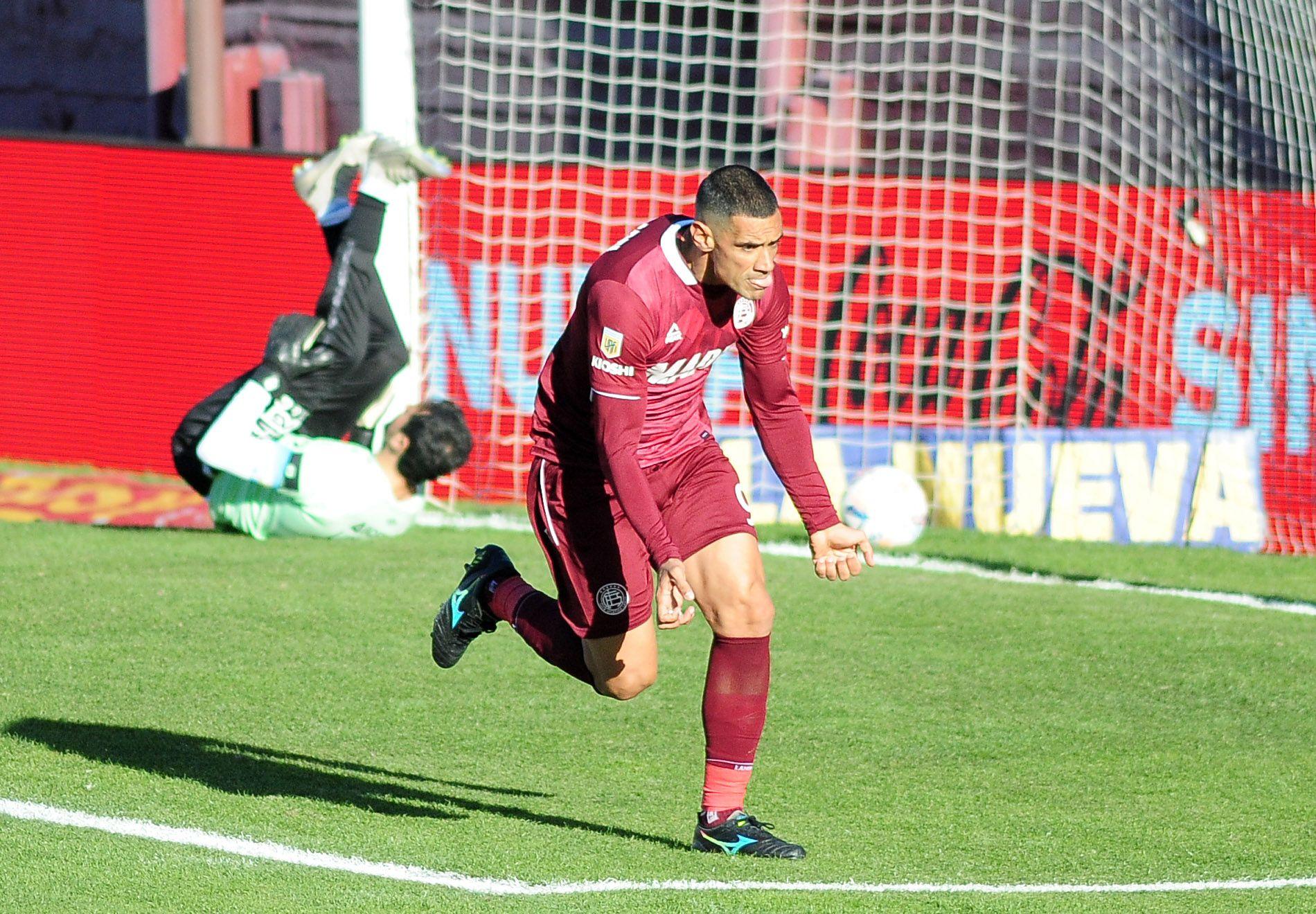 José Gustavo Sand, Pepe, just turned 41. It is the symbol of Lanús, one of the leaders of the 2021 Tournament and, with four goals, the contest’s gunner. The rubric for another season confirms the theory: it is only knocked down by the wind.

Refugee Team: dramatic life stories that are repaired with sport

The fallen leaves of the almanac, the passing of time, are excuses for the mediocre: he just lost the final of the South American Cup against Defense and Justice, on January 23, he cried a sea of ​​tears, accepted defeat with nobility, went to the locker room and reassembled his ambition: the engine of continuing to run and scoring goals, taking an Olympic lap again.

Handling the body and holding the ball in the face of an opponent’s attack, its main virtues (Fotobaires /)

The attacks of the pandemic did not surprise him, he weighs 84 kilograms, as in almost his entire career, with the arrogance of physical rigor: at home, in the park, in the field, when the pandemic hit or in practice, almost always on double shift, Sand is a physical model. He runs, runs as much as he can and, now, backs up: although his habitat is the area and the goal (“When two games go by without scoring, I go crazy”), he took a liking to driving, that disguise yourself as an old hitch. A stylist from the vacuum pass.

Delfina Pignatiello, in the 1500 meters of Tokyo 2020: the misstep in an Olympic debut with more suffering than she enjoyed

He screams, he gets angry. He shouts the goals with an overflowing passion and gets angry when the young people around him (Lanús is a factory of promises) do not kick forward, like him. “I always tell the kids to see how Sand celebrates goals, even in that he is an example,” Zubeldia praises him whenever he can.

It’s bravo Pepe. He could be the father of more than one: Julián Aude, with a crack projection, is 18 years old. During matches, overflowing ambition, he is able to teach them with an imaginary whip. Later, he scores a goal and goes right to celebrate it with his teammates … from the substitute bench. Quite a symbol. Jorge Almiron, the best coach of his career, who watched him out of the corner of his eye in the first months, understood why he was so great: the goals belong to everyone, the insiders, the outsiders.

Physical rigor, temperament, ambition and … leisure time. Or his other passion: when he needs to refuel, he returns to Bella Vista, his home, and rides all day. He usually arrives at 6.30, still at night. Together with his brother, he keeps his grandfather’s passion for racehorses alive.

Two goals on the first date

His Haras is called Don Lenin, he knows all the secrets of donkey life, from the deep earth to the days when he went to Palermo. Never relaxed: always wants to win. In turf, in football, in life. Of course: it needs the warmth of affection. So much physical and mental adrenaline (in several mistakes of his football career, accepted the help of psychology professionals, years ago, when it was a sensitive subject, little spread), it requires the support of affection, in the value of feeling.

Luis Zubeldia, the coach. Laucha Acosta, the partner. They are friends, beyond football. What’s more: if Zubeldia didn’t stay in the Fortress, Pepe would have left. They are one. “I don’t think Pepe will regret the passage of time. It did him good in every way, from football to physicality. Even the aesthetic … I have no doubt how ambitious and competitive it is, he’s better prepared than 16-year-olds″ Says Laucha.

Two goals on the second date

The DT is 40, a kid next to Pepe … “I don’t have adjectives for José (that’s what he calls him,“ José ”). You would have to ask the Royal Spanish Academy, it is difficult. For now, I am very happy that he is happy and that he is serving the team. That he is well with his family and enjoy football, this is very nice and it happens quickly …”, It said, days ago. Actually, it does not go so fast: almost 22 years have passed. After doing the lower divisions in River, a stage in which he stood out with 138 goals, made his presentation at the Apertura 1999, in Colón.

“I would not be surprised if a club comes to want to buy him, and ends his career at another club. I always say that Pepe will go for more, I have supported him for a good part of his career and It is not that I love it because I have affection for it, but that I love it because it is functional to my game, because I feel that it gives us a series of things that, for the speed of certain players, is important. And not to mention the average goal ”, the driver wrote some time ago. He recognizes that he is the DT within the field of play.

Other times, the same feeling: Zubeldia and Pepe Sand, in Racing (Racing Club /)

A couple of facts to graph his arrogance: scored 147 goals in 233 games in Lanús. He is the top scorer in Argentine soccer activity, with 284; Licha López has 247 and Lucas Barrios, 230 on an imaginary podium.

During the strictest quarantine, he trained every day in triple shifts on his payments, he did not lose a gram of muscle mass. He lacked the ball, the friction with his teammates. But it did not loosen a millimeter in his adventure of never retiring, when other Under 40s bowed to goodbye. It was logical: the coronavirus took everything, except Pepe, who usually says that the best thing he has is play on your back, hold your opponent and the ball with your body.

A symbol, Sand’s goal cry is one of the images of our football (Fotobaires /)

“And be well located.” Not only on the field of play: also, in life. “I can continue playing because I feel comfortable. It is key to have a good diet. Genetics help and that I always trained ”, he explained. He goes to bed early, gets up when the sun is still stretching. Run, look at the arch and Spy on River, always a very special rival, in the clash scheduled for this Wednesday, in the third chapter of the tournament.

There will be time to lie down in an armchair.