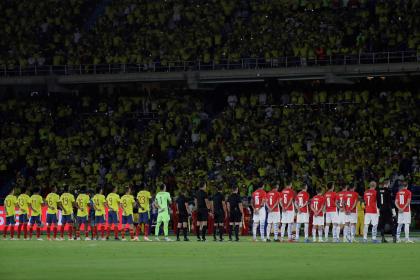 The Paraguayan Gerardo Ortíz, goalkeeper of Once Caldas, habitual in the calls of the albirroja, was not taken into account this time by Guillermo Barros Schelotto. Although he is focused on the Betplay League with his team, he closely follows what was done by his team at the end of the Qualifiers. They come from beating Ecuador 3-1 and now they will be judges on the last date.

Paraguay will face Peru in Lima on the last day, a key result for the aspirations of the Colombian National Team to seek a place in the World Cup through the playoffs. Ortíz made clear his position regarding the last date, in which Peru, Colombia or Chile will remain with the place of the playoffs. He also discussed his selection and what to expect from her on Tuesday.

“Without a doubt, yes,” said Gerardo Ortíz in a conversation with the Snail Radio Vbar, after being asked about the “little help” that Colombia expects from the Paraguayans. “Today we are thinking about the replacement, beyond the fact that we are out of the World Cup. Paraguay has shown that it will always go out to win and the claw is not going to lose it. Hopefully Colombia will do its job and we can give it a hand”.

And he added: “Paraguay is not fighting to enter the World Cup due to details, but there are players. Unfortunately, it happened that way, but there is a great human group and raw material. Peru also played a great game and comes from great wear, but I think that Paraguay will be given the opportunity, each one doing their job, so that Colombia reaches the World Cup, which is a wish of mine”.

Did they incentivize them with prizes? Although he is living the day of the Qualifiers from a distance, Ortíz gave a resounding no. “It’s a matter of professionalism, of entering to win. At the national team level, one doesn’t think so much about the economic issue, but about the flag.”

Finally, Gerardo referred to the situation in Colombia, which will reach the last day expecting a miracle. He must not only beat Venezuela, but hope that Peru does not beat Paraguay. “The truth is that the situation in Colombia is strange, having the great squad it has and the coaching staff. It is very rare, but football has that and we saw it with Italy, here it is not an exact science and everything can be given. To Colombia he lacked the goal but he always proposed and was in the rival’s goal. I hope the results come through and he goes to the World Cup, because it’s a wonderful country and when the national team plays, everyone is happy”.

Paraguay wants to ‘give a hand’ to Colombia: ‘let them do their job’