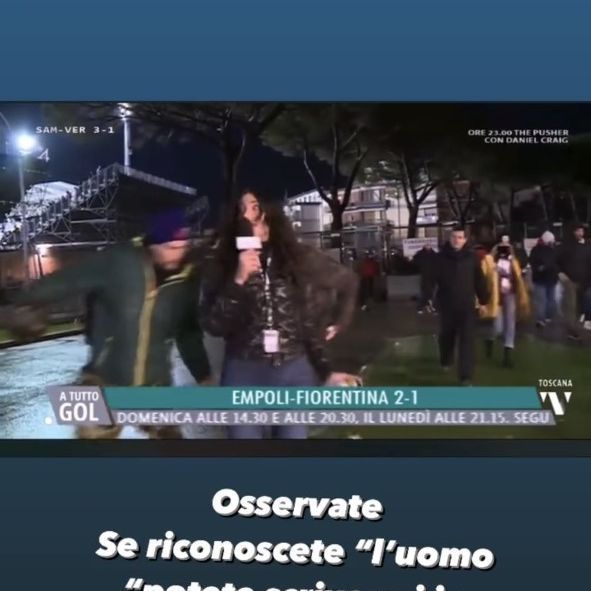 The reporter, Greta Beccaglia, was interviewing some fans after the Tuscan derby, when some men started yelling at her, and one even patted her with his hand on her butt

ITALY – An Italian reporter from the local television Tuscany TV was harassed and even received was touched in full direct at the end of the soccer match that faced last night the Empoli against Fiorentina, which sparked outrage and condemnation today.

The reporter, Greta beccaglia, was interviewing some fans at the gate of the stadium after the Tuscan derby, which ended 2-1 for Empoli, when some men began to yell at her, to pass very close to her and one even went so far as to touch her with his hand in the rear.

At that moment she says to that subject “you can’t do that, I’m sorry” while the presenter, Giorgio Micheletti, encouraged her to continue with the connection: “Don’t be angry, you also grow with these experiences,” she tells him.

At the end of the connection, the presenter condemns the conduct of the “tifosi”: “Some behaviors deserve a healthy smack, which if it had been given as a child would have allowed them to grow,” he says.

The reporter has narrated her experience through her Instagram profile and has asked her almost 19,000 followers for help to identify the man who touched her.

“It is unacceptable,” he considered, and later exonerated the vast majority of Fiorentina supporters.

The police of Empoli has begun to study the images to try to identify the subject, local media report.

The events, quickly viralized on social networks, have been condemned by professional unions such as the RAI Union, the Tuscan Press Association or the National Federation of the Italian Press (FNSI), among other organizations.